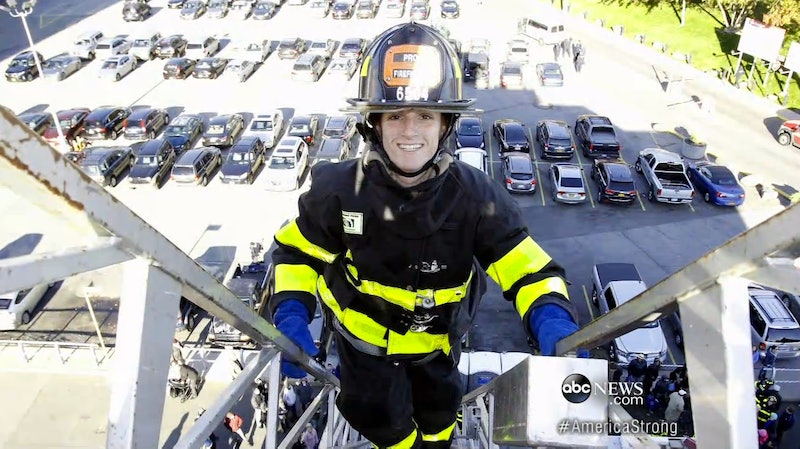 One New York City woman is carrying on her father's legacy in a truly meaningful way. Josephine Smith lost her father, Kevin Smith, in the 9/11 attacks. Kevin had been a NYC firefighter and one of the first responders who rushed to the scene when the Twin Towers fell, and, tragically, he was one of the hundreds of firefighters who perished. 13 years later, his daughter is honoring his memory by following in his footsteps. Josephine Smith graduated from the FDNY Academy on Tuesday along with 280 other Probationary Firefighters. At the graduation ceremony, she told ABC News, "I told him I'd be working with one day." Looks like she's making good on her promise.

Smith recalls looking up to her dad growing up and wanting to be a firefighter from an early age. "I have wanted to do this for as long as I can remember," she said at the ceremony, held at the Christian Cultural Center in Brooklyn. Though she wasn't able to fulfill her dream of working alongside her dad, she feels that he is with her in spirit, telling ABC that she felt like her dad was "sitting in the front" at her graduation ceremony. And it was the thought of "working with my dad every day" that kept her going throughout her arduous training.

Josephine also keeps her father, who had been stationed at Hazmat Co. 1 in Manhattan, close in other ways. She always keeps a picture of her father tucked in her cap, wears a bracelet engraved with his name, and carries a piece of World Trade Center steel in her pocket, a reminder of her father's dedication and sacrifice.

Josephine's journey with the FDNY has been met with challenges, but she's persevered, no doubt fueled by the thought of her father. She first took the entry test in 2007 and then again in 2012. When she finally began training, she and her classmates went through a grueling 18-week program, where they learned skills like fire suppression and confined space rescues.

Josephine, who was one of the four female graduating firefighters, now joins the 44 women in the FDNY, which is the highest number of female firefighters in NYC history.

On Tuesday, the 280 Probationary Firefighters who joined the FDNY's ranks were welcomed by NYC Mayor Bill de Blasio, who told the crowd:

Only the best become a part of this Department. You represent everything that is great about New York City. You make us all proud.

Of Josephine, the mayor said:

She is the first female legacy in the history of this department.

And no one would be more proud of Josephine than her dad. She told ABC that while her father would be worried, "being a firefighter himself," he would be "absolutely proud."