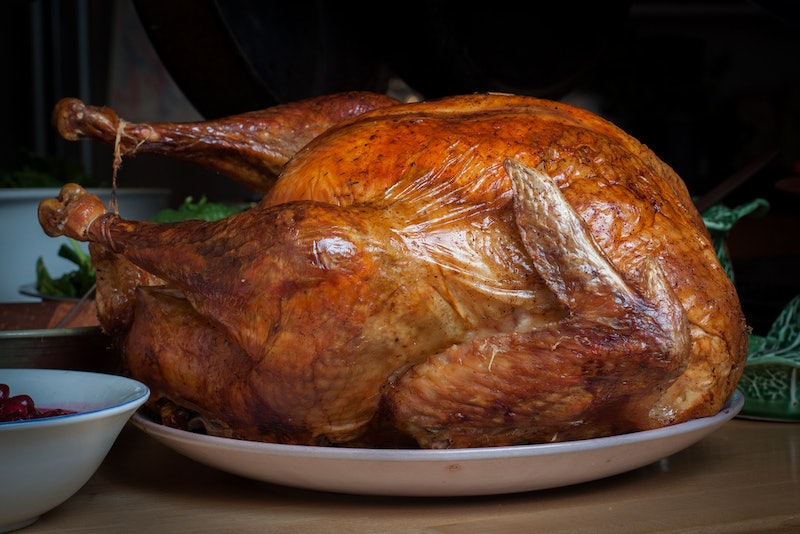 Nothing encourages kitchen shenanigans quite like a food-centric holiday; as such, it probably shouldn’t be surprising that most of us have conducted some pretty weird culinary experiments around Thanksgiving. Just in case you’ve been wondering exactly how weird they’ve been, though, the Food Network did us all a favor and assembled the hottest Thanksgiving food trends of the past 20 years into a pair of seasonally appropriate infographics. Just, y’know, in case you were planning on combining Throwback Thursday with Turkey Day this year.

As First We Feast puts it, we can probably blame the Internet and celebrity chefs for most of these trends (or mistakes, depending on how you look at it). But although the list is rife with entries courtesy of Martha Stewart, Alton Brown, and Rachael Ray, I suppose we should at least be glad that none of Guy Fieri’s monstrosities made the cut, right? Here are seven of what I consider the most inexplicable Thanksgiving trends; head on over to the Food Network’s website to see the full infographics.

I’m not knocking Tofurky — Thanksgiving is supposed to be a time of inclusiveness, so hoorah for vegetarian options — but let’s face it: Early Tofurkies weren’t exactly the greatest tasting things ever. Also, the word “Tofurky” is ridiculous.

We deep fry everything else in this country, so why not whole turkeys? It seems a lot of effort to go to, though; cooking a huge-ass bird is difficult enough without dropping it in a vat of boiling oil. Or butter. Or whatever the hell lipid you’re supposed to use to fry a turkey.

OK, be honest: Is there really enough of a difference between mashed and “smashed” potatoes to require two unique terms? Because I’m not convinced that there is. Whatever the case, “smashed” spuds rose in popularity in 1998; a few years later, Rachael Ray would make them a staple in her 30 Minute Meals.

To be fair, balsamic glaze really is good on everything… but when you pour it all over your entire plate, doesn’t it kind of make each element of your Thanksgiving dinner taste exactly the same?

Why do we need to make our fowl into Matryoshka dolls? No idea. I’ll confess that I’ve never seen a Turducken in person before, but I’m strangely fascinated by the concept.

I had to look up what this was, as I’ve never before encountered the term. It involves cutting the backbone of the turkey and splaying it out, limbs akimbo, before you shove it the oven; apparently it results in a faster cooking time and a much more evenly cooked bird. Here’s how to do it, according to Serious Eats.

What’s wrong with good old-fashioned creamed spinach? Is it not “super” enough for you?

See the full list of Thanksgiving food trends from 1994 to 2013 over at the Food Network.

More like this
TikTok's Favorite Bartender Thinks Mimosas & Bloody Marys Are Out For Brunch
By Alexis Morillo
Here’s What Sarah Jessica Parker’s Canned Cosmo *Actually* Tastes Like
By Emma Garza
Are We Drinking Rosé All Wrong?
By Sheila Yasmin Marikar
Meet The Spice Company Founder Who Sees Chai As A Metaphor
By Madhuri Sathish-Van Atta
Get Even More From Bustle — Sign Up For The Newsletter