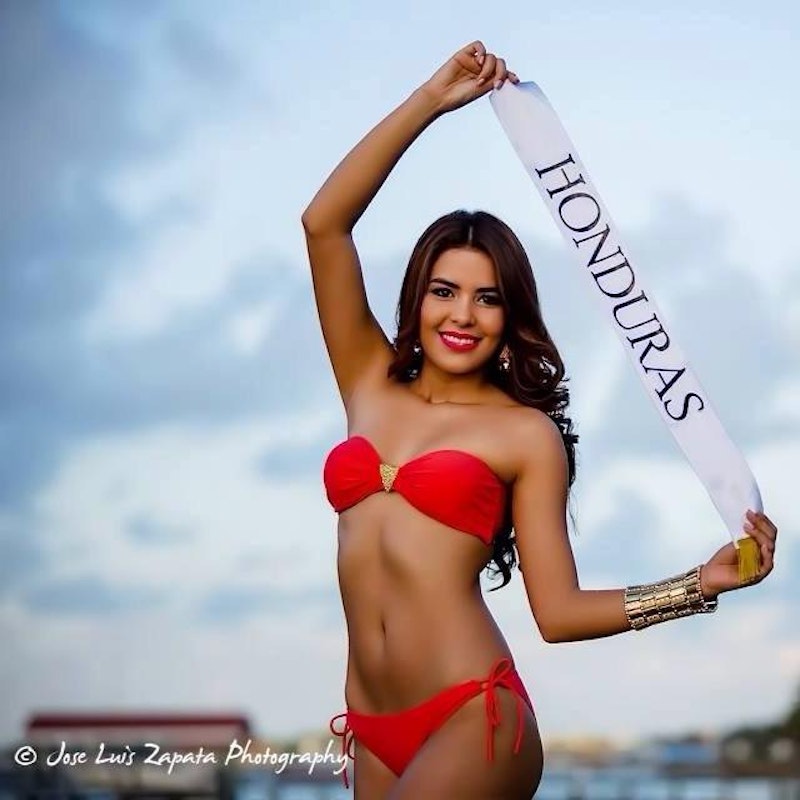 Tragic news will cast a shadow on the 2014 Miss World pageant, which is set to begin on Thursday, November 20 in London. Recently crowned Miss Honduras, María José Alvarado, was found dead along with her sister Sofía Trinidad on Wednesday, November 19. According to multiple reports, the 19-year-old beauty queen and her 23-year-old sister were found buried near the spa they disappeared from on November 13 in the Honduras town of Santa Barbara. Both women were found with gunshot wounds.

We are 95% confident that the bodies are of them, but medical examiners will have the last word.

AP reports that two men have been arrested in connection to the crime. Sofia's boyfriend, Plutarch Ruiz, confessed to the crime and gave police the location of the bodies, along with his accomplice, Aris Maldonado, police said. Maldonado apparently told police Ruiz was the murderer, explaining Ruiz and Trinidad allegedly got into a fight after she danced with another man at a club. The fight escalated, according to Maldonado, until Ruiz pulled out his gun and shot both women. They buried the bodies on a nearby mountain near a river, where they were found by police.

To everyone around the world who has been touched by the awful news from Honduras this morning.

We are devastated by this terrible loss of two young women, who were so full of life. Our thoughts and prayers are with the family and friends of María José Alvarado & Sofía Trinidad at this time of grief.

We are receiving messages of condolences and support from our Miss World family across the world, who all share our sadness at such a tragedy. We will be holding a special service with all of the Miss World contestants on Sunday, where we will be honoring the lives of María José Alvarado and Sofía Trinidad, and say prayers for them and their family.

We will also be having a special fundraiser to keep their names alive forever and donate the money to a children’s home in Honduras, chosen by their mother.

Chief of Criminal Investigation Leandro Osorio told press he believes more people may be involved with the murder, and they are currently exploring other leads. The Honduras pageant organization in charge of Miss Honduras said they will not provide a replacement candidate for Alvarado, out of respect for her memory.

According to Alvardo's Miss World bio, she aspired to be a diplomat for Honduras and enjoyed competitive sports and dancing.

More like this
The Music Industry Continues To Fail Black Women
By Precious Adesina
Michigan’s Governor Is “Going To Fight Like Hell” To Protect Abortion Access
By Andrea Zelinski
How To Fight For Reproductive Rights, Based On How Much Time You Have
By Courtney Young
Sarah Everard’s Killer Wayne Couzens Is Appealing His Whole-Life Sentence
By Sophie McEvoy
Get Even More From Bustle — Sign Up For The Newsletter