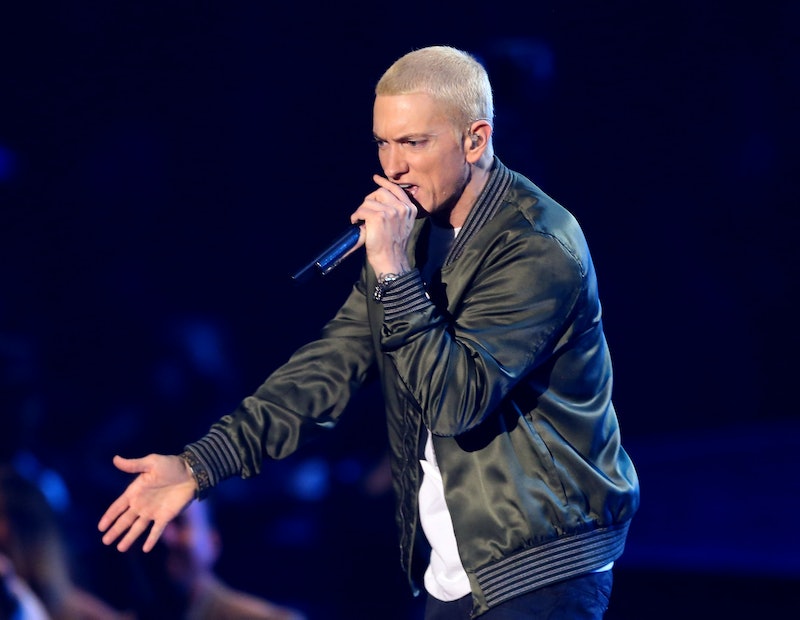 The Real Slim Shady has some big news, but he doesn't remember it. Eminem revealed that he's releasing a demo version of "Lose Yourself," but he has no recollection of recording it in the first place. In a clip from his Lose Yourself documentary, he said, "There was another version of that song that don't even remember recording. I don't remember any of the first verse." Spliced in with his commentary is a clip of the demo, and the lyrics are a lot different than the opening of the song we know and love. Check out the lyrics below:

"If I was frozen inside a moment/If I could capture time inside a capsule/Then I could try to channel it through Cadillacs and Buicks/And that's when you hit the roof because you can't sit through it/Just lose yourself in this music, this moment."

Even subtle word changes make an impact — in the official version, Eminem says "just lose yourself in the music," whereas he says "this music" in the demo. The start of the first verse in the 2002 song from 8 Mile starts off with, "Look, if you had one shot, or one opportunity/To seize everything you ever wanted. one moment/Would you capture it or just let it slip?" The message remains the same about embracing an opportunity and capturing time, but the lyrics really change everything. You can hear the full version on Eminem's compilation album Shady XV, which his stores on Nov. 24.