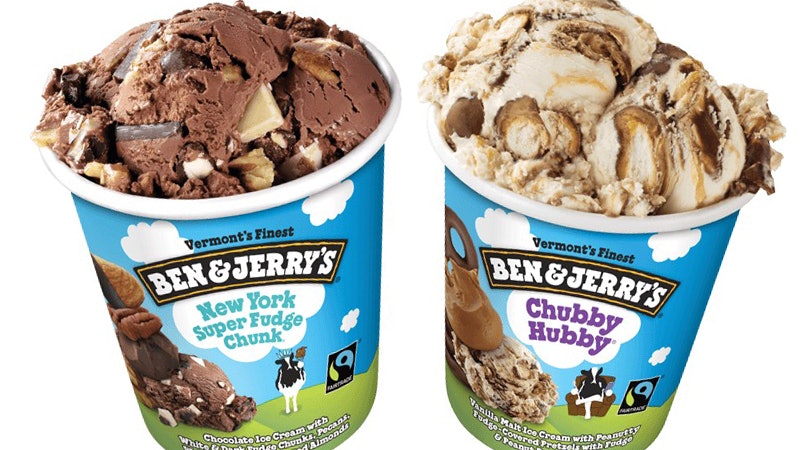 If there's one thing you should know about me, it's that Ben & Jerry's is my boyfriend. Apologies to my human boyfriend, but he knows it's true. I'm pretty sure Ben & Jerry's is his boyfriend too, so for the sake of being diplomatic, I'll say Ben & Jerry's is our third. Which obviously leads me to the question: What if Ben & Jerry's flavors were actual guys you'd dated, and not in the sense of me just being a crazy person who wants to marry ice cream and live with it forever and ever and happily after? Because of course we can personify ice cream. We have such an emotional attachment to it that it would be bonkers not to personify it.

Let me get one thing straight before I go about attributing Ben & Jerry's flavors to men: all of them, it goes without saying, are simply IRRESISTIBLE. Yes, even Cherry Garcia. Every last one of these ice cream men was, for whatever reason, calling you like a moth to a flame. Not one of them wasn't delicious to lick. If men are going to be ice cream flavors, then you better believe they were some of the most inevitable, yummy romances you ever had. I'm not saying they were good for you, but they were tantalizing enough that you kept dipping your spoon back in for more. Here are who Ben & Jerry's ice cream flavors would be if they were guys you've dated.

You still think about cake batter, don't you? Cake Batter was a risk you took one night, a one night stand maybe, that was so delightful in every way, you just can't shake the feeling of it. You want more. The only problem is you never exchanged numbers, and you don't have any mutual friends. Maybe you kept going back to the same bar you met at, hoping to run into him again, but you can never seem to find him, no matter how hard you look. Cake Batter is one of your most beautiful, fond, sexual memories.

The sexual chemistry with Phish Food was PERFECT. There was no denying it. You melted every time he so much as brushed your arm with his pinky. Maybe you're still with Phish Food, or maybe you still hold onto the possibility of rekindling your romance. Phish Food is your sexual soulmate.

When you find yourself alone and with no other choices at 3AM, and Cherry Garcia just happens to be there, you'll take him home. Cherry Garcia is never your first choice, but when there's nothing else available, you have to make the most of what you can have at that moment, because of course, you can't go home empty handed.

This one goes without saying, doesn't it? Chubby Hubby was safe, reliable, and your mother wanted you to marry him. While you would have been happy to do so, Chubby Hubby had more of a raw, messy sexuality (OK, I'll level with you: He was a fatty who had sex like a fat kid eats cake), and maybe not quite how you pictured living the rest of your life. You keep Chubby Hubby in the back pocket, a kind of "If I'm still single at 35" deal.

Chocolate Therapy was your Dawson. Your best friend. Whenever times got rough, you'd call him and he'd be there, your shoulder to cry on. Once, after too many glasses of wine, you accidentally slept with him, but quickly relegated him back to best friend status the day after. Having him as your confidante is way too important to you to spoil with casual sex.

New York Super Fudge Chunk was your sugar daddy. Maybe he wasn't necessarily a daddy in age, but he certainly was wealthy, and he treated you to decadent dinners and a Gossip Girl lifestyle. He was probably in finance, and generous, articulate and intelligent. He also had a massive ego so as much fun as you were having, you had to cut him loose for the cringe factor.

Half Baked was that stoner you briefly dated because you thought he was funny. You dumped him after he stopped during sex to ask if he could smoke a bowl.

More like this
Starbucks’ Chocolate Cream Cold Brew Tastes Like This Retro Candy
By Emma Garza
If Your Refrigerator Is A Mess, These 25 Organizing Products Can Help
By Courtney Young
Meet The Spice Company Founder Who Sees Chai As A Metaphor
By Madhuri Sathish-Van Atta
Here’s What Sarah Jessica Parker’s Canned Cosmo *Actually* Tastes Like
By Emma Garza
Get Even More From Bustle — Sign Up For The Newsletter