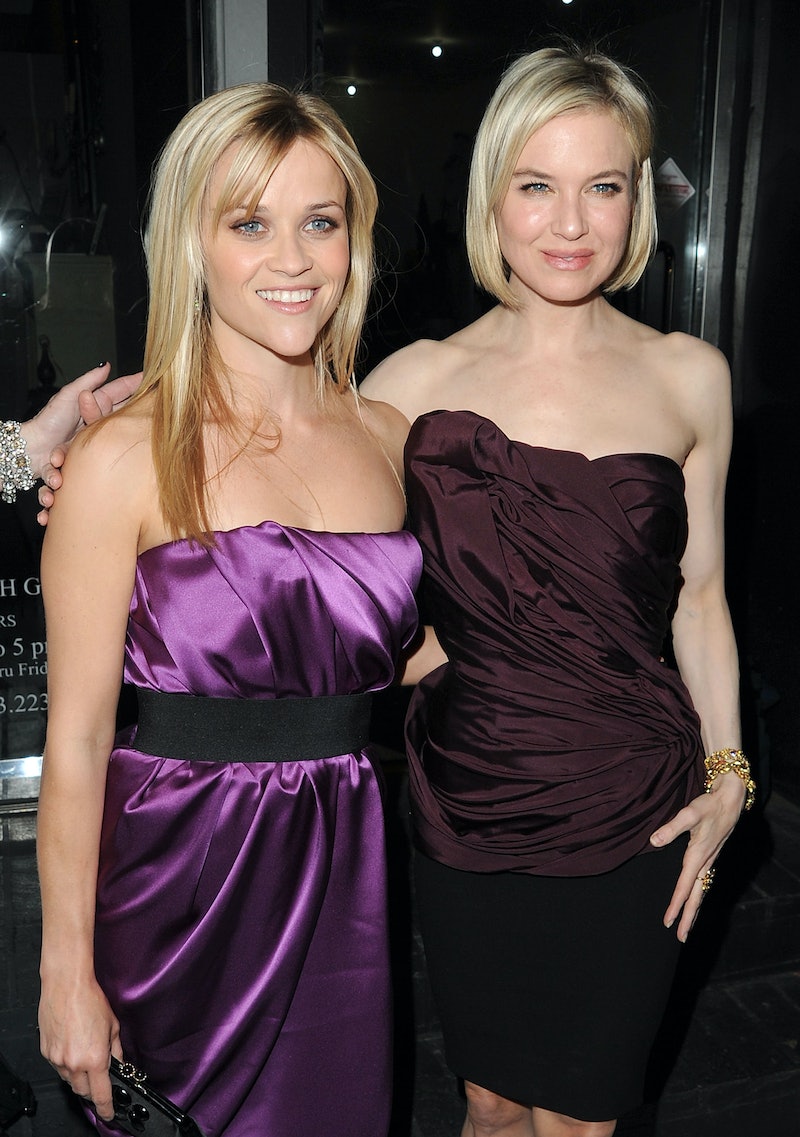 Once again, Reese Witherspoon is standing up for women in an incredible way. This time, it was a passionate rant about the "judgment and assault" that everyone faces — particularly celebrities like Renee Zellweger. When asked about the criticism of the actress' "changing face," Witherspoon said, "It's horrible. It's cruel and rude and disrespectful, and I can go on and on and on. It bothers me immensely." Although she paused for a moment afterward in the The Hollywood Reporter 's annual actress roundtable, she quickly added her full stance on the issues at hand:

"I know this is so Pollyanna of me, but why — and it's particularly women — why do they have to tear women down? And why do we have to tear other women down to build another woman up? It drives me crazy. Like, this one looks great without her makeup but that one doesn't look good without her makeup, and it's all just a judgment and assault that I don't — look, men are prey to it as well. I just don't think it's with the same sort of ferocity."

Witherspoon also revealed why she started her own production company, Pacific Standard. Although she initially wanted to play strong female roles herself — and it did lead her to portray Cheryl Stayed in Wild — it isn't just about her. Even though she didn't play Amy in Gone Girl, she was glad to see the character on the big screen with her in the producer's chair. And all in all, she just wants to see great role models for her daughter, Ava.

"About three years ago, I started seeing this complete lack of interesting female leads in film. First I got mad, really mad. And then I was like, "It's nobody's fault; if you're not proactive about things ... If I can develop anything for any other women, I don't care who it is; I just want my daughter to grow up seeing complex, interesting, nuanced women in film."

Among the many other topics at THR's roundtable was the recent celebrity nude photo hack. None of the participants — Witherspoon, Julianne Moore, Amy Adams, Patricia Arquette, Laura Dern, Felicity Jones, and Hilary Swank — were directly affected, but it incited a strong reaction from one actress. Arquette gave her two cents on Lawrence's situation, directly referencing the "victim-blaming" that happened.

"I feel really strongly that there's nothing deviant about two lovers sharing sexual intimacy. That is normal. It's been happening since the beginning of time ... I had a lot of women write to me that [the hacked actresses] were stupid to take those pictures to begin with. Victim-blaming — we have a long history of that. And, of course, someone who has a long-term relationship — three months that [Lawrence was] away [from her boyfriend], they're going to share their intimacy with their partner. That society thinks it's OK [to hack the photos], that it's their fault — that's deviant. That's what we're teaching our kids, that if somebody messes up or does what they want in their private life, they're stupid and you can, basically, communally molest them."