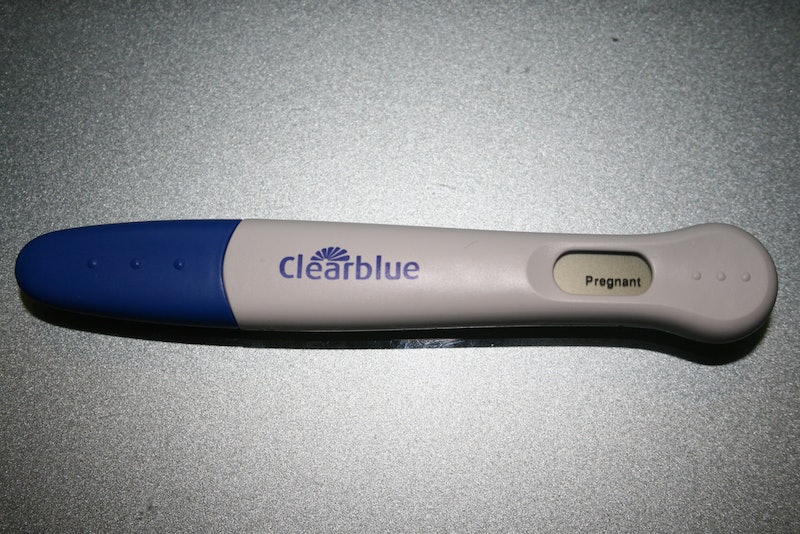 Pregnancy tests are essentially one-trick ponies. Are you pregnant, or not pregnant? The test's entire reason for being is to answer that one question.

But we don't use rotary phones anymore — why shouldn't pregnancy tests, too, change with the times? Leading this pregnancy testing revolution is Clearblue, whose new line of advanced digital pee tests come with a weeks-pregant estimator. In addition to the pregnant/not-pregnant dichotomy, this test will tell you if you're one, two or 3+ weeks along.

In doing so, the tests may also provide an early indicator of miscarriage risk. Though they're not marketed as miscarriage predictors, "a lot of women use the test as a reassurance tool to indicate that their pregnancy is progressing as it should be," British blog The Alpha Parent notes.

Clearblue's tests have been available in Europe since 2008, though they just received U.S. Food and Drug Administration approval in August 2013. Like most pregnancy tests, they work by measuring levels of the pregnancy hormone human chorionic gonadotropin (hCG) in a woman's urine. When a pregnancy is going along properly, hCG levels rise every week.

One of the key warnings signs of miscarriage is hCG levels not rising as rapidly as they should in early pregnancy, according to Boston NPR station WBUR. "If a woman has tested positive for pregnancy and does not get a '3-plus weeks' reading after three weeks or more of pregnancy, she might be at risk."

A doctor on Clearblue's advisory board told WBUR that the tests weren't intended to be used that way — but they could be. He said pregnant women should take caution and notify their doctors if test results don't line up with actual weeks pregnant.

Keep in mind that the test's predictive powers only work in very early pregnancy. If you tested your urine at 6-weeks pregnant and received a "1-2 weeks" result, that could definitely be bad. But if you tested at six-weeks and got a '3+ weeks' result ... well, that could mean your hCG levels are stuck at three weeks and not progressing or it could mean that they're progressing just fine. There's no way to know.

Regardless, women shouldn't be too concerned by the numbers on the stick, says The Alpha Parent. hCG levels "are higher first thing in the morning, lower in the evening, fluctuate when a woman is on medication, depend on the concentration of the urine" and vary from woman to woman — providing plenty of potential for misleading results.

"When a test inaccurately suggests that the pregnancy is less advanced than the woman expects, this misleading information can be worrying, particularly for women with previous miscarriage," she notes. Yet while the info could be reason to worry, it could also simply mean you drank a lot of water that day.