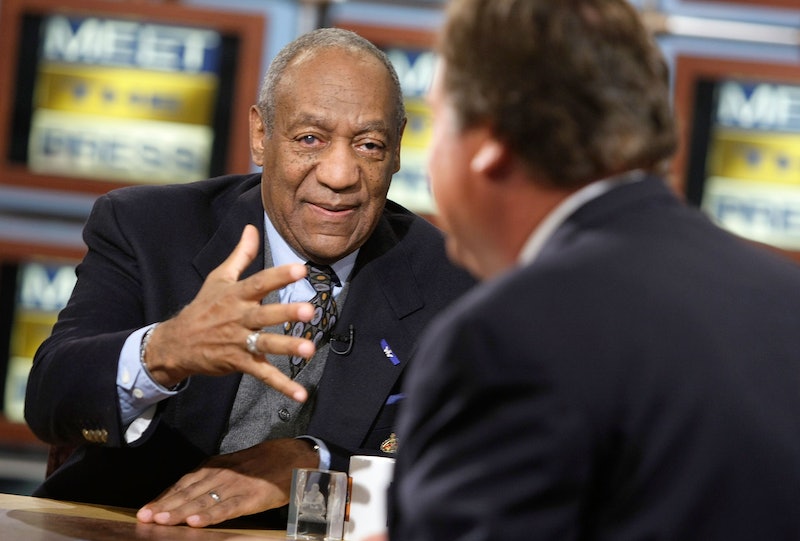 It's no secret at this point that Bill Cosby and his lawyers have declined to respond to the sexual abuse allegations that the actor and comedian has been facing recently. Perhaps recently is the wrong word, because sexual abuse allegations against Cosby go back as early as 2000; now is simply the first time in a long time that the public seems to be paying attention. In light of that, and in light of the rash of victims new and old who are retelling or revealing their claims while they have the public's ear, AP asked Cosby about the rape allegations in an interview that they released on Thursday. Much like when he spoke with NPR last Saturday, Cosby chose to remain silent about the controversy. Unlike when he spoke with NPR last Saturday, it was a wordy kind of silence.

"There is no comment about that and I'll tell you why. I think you were told, I don't want to compromise your integrity, but I don't talk about it," US Weekly transcribes in their account of the interview. After everything was said and done, Cosby later requested that the reporter and AP bury the video: "I would appreciate it if it was scuttled. I think if you want to consider yourself to be serious that it will not appear anywhere."

The video doesn't really add anything new to the current scandal that confronts the TV father. His official position, as stated by his lawyer, is that, “Mr. Cosby does not intend to dignify these allegations with any comment.” Throughout the clip, Cosby reinforces that statement and expresses disappointment that AP would put him in such a position.

According to Vulture, the original interview with AP was about Cosby's collection of African American art being admitted to the Smithsonian. The interview, which was done on November 6, had none of this newly released footage attached to it when it was published. AP even warns at the end of the clip that they had made no promises to delete this portion. "Since that AP interview, two women have come forward publicly to accuse him of sexual assault... the AP went back through the full video and made the decision to publish Cosby's full reaction to questions about the claim."

More like this
Armie Hammer's Exes Share His Alleged Voice Messages About Cannibalism & Abuse
By Grace Wehniainen
At 14, Tatiana Maslany Was Obsessing Over Tamagotchis & The Spice Girls
By Gabrielle Bondi
Beyoncé & Madonna’s “Break My Soul” Remix Honors A Group Of Black Icons
By Stephanie Topacio Long
Jennifer Aniston Just Gave Courteney Cox The Biggest Endorsement
By Darshita Goyal
Get Even More From Bustle — Sign Up For The Newsletter