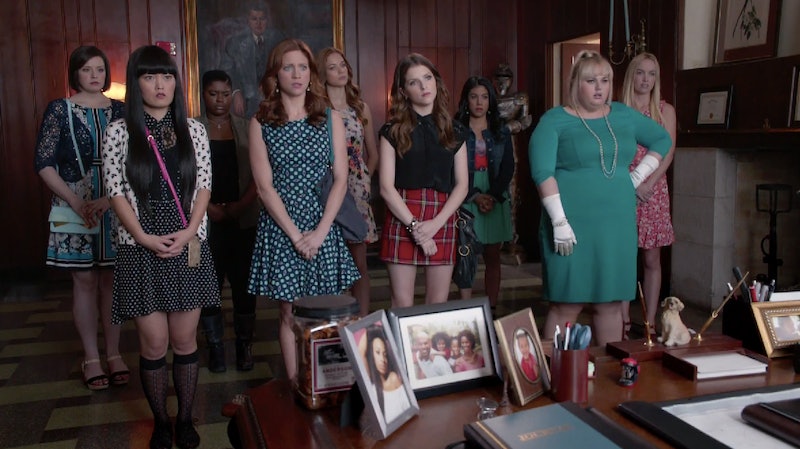 The moment we've all been waiting for is here: the Pitch Perfect 2 trailer has arrived, and it's just as awesome as we expected. It features all of the characters we love and a few new faces, fantastic music (kicking off with a rendition of "Cups" that breathes new life into the Pitch Perfect hit), what looks like a secret underground society for acapella battles, and a new storyline that makes sense for the Bellas: going international.

As Gail (Elizabeth Banks) and John (John Michael Higgins) explain to the ladies, the World Championship of Acapella happens every four years, but Americans never win because "the whole world hates us." Ouch. Looks like they have their work cut out for them. With Beca (Anna Kendrick) and Chloe (Brittany Snow) leading the team this year, it may be a little less intense than when Aubrey (Anna Camp) ran the show, but don't worry — the former captain is still there, at least during a bonfire singalong. And those Treblemakers are also still around, but no word if Beca and Jesse (Skylar Astin) are still harmonizing together.

Although everything about PP2 is exciting, there's a catch at the end of the trailer that puts a bad taste in my mouth. Amy (Rebel Wilson) is chatting with Bumper (Adam DeVine) at a party when he asks, "Do you want to have sex later?" She reacts just as she did in the first movie by shutting him down with a loud "No!" but this time, she winks. Confused by the mixed messages, he asks again and she asserts she's not interested, then winks a second time. It's a joke mocking consent that I did not expect to see in such a female-empowered film, especially one helmed by Elizabeth Banks. Hopefully the movie redeems itself in that department when it hits theaters on May 15, 2015, because otherwise, Pitch Perfect 2 looks, well... pretty perfect.