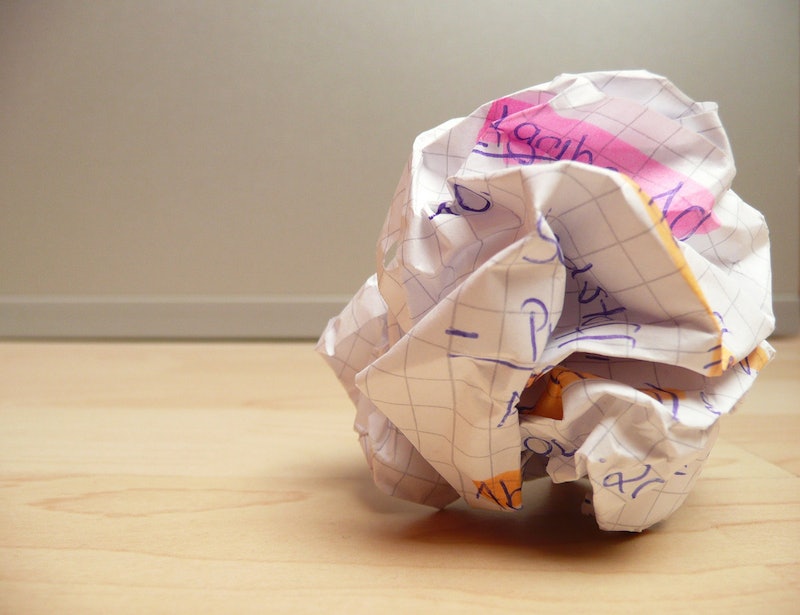 When Delacorte Press bought my first young adult novel, Red, in October of 2011, it was part of a two-book deal. I had barely started work on my second book, and when my editor asked about my work-in-progress, I mumbled something brief and nebulous — I had only just met her, and I was still intimidated by the fact that an editor from Random House was even talking to me. She gave her blessing to the idea she thought I had described, and I went home and spent nine months writing the book I thought I had described.

As it turned out, they were not the same book.

I turned in the first draft of For Real at the end of 2012, and when my editor asked me to rewrite it from scratch, I was devastated and mortified. I felt like I had failed an important test; if I could write one book good enough for publication, why couldn’t I do it again? Maybe my first book was a fluke and I wasn’t cut out for this industry after all. But when I finished my massive rewrite three months later and blogged about the experience, authors came out of the woodwork to say they’d gone through the same thing. Lots of stories don’t come out right the first time, and although we, the authors, are often too close to see it, our editors aren’t. Mine saw past what was on the page and into what the story could be, and she pushed me to step up and craft it into the best possible version of itself. I could write another publishable book. I just hadn’t done it yet.

Below is my original post about the rewrite process in all its horror and glory. Now that I’m on the other side, I don’t regret how it played out — For Real is a thousand percent better than it used to be, and its current incarnation might’ve been impossible without that flawed first draft.

How to Rewrite Your Book From Scratch in 75 Days (and Not Die): A Step-by-Step Guide

One hour later, receive the actual editorial letter, which essentially says, "Set-up, characters, and emotional arcs? Decent. The entire rest of the plot? Not so much. Please delete all but the first three chapters and try again. You have eight weeks."

Remember those tissues you just prepared? Reach for them. Cry for three continuous hours while furiously texting all your friends about how your editor does in fact hate both you and your writing. Blast “Shake It Out” by Florence and the Machine on repeat because you really need to hear the line, “It's always darkest before the dawn” 7,000 times. Eat eight cookies and go to bed.

Day 2: Decide you have been sulking long enough and get to work. Text your critique partners and force them to have epic brainstorming sessions with you. Flail a lot.

Day 5: Hit on an idea for a completely new plot. Rejoice! Grudgingly admit that your editor was right, because if you can pull this off, your book will be a thousand times better. Then realize implementing the new plot will mean deleting 70,000 words of your existing manuscript. Stop rejoicing and eat more cookies.

Day 7: Meet with your editor (by phone, 'cause you're still sick) and pitch her your new plot. Do a quiet happy dance when she says, "Oh, this sounds so much better!" Beg for a few extra weeks to work on it. As soon as you get off the phone, realize all that extra time will be will swallowed up by the extensive research you have to do before you can start writing the new plot. Finish your cookies and stock up on more.

Days 8-16: Spend 14 hours a day doing research. Google everything from "how to paint an elephant's toenails" to "New Delhi goat farm" to "Indonesian marriage practices" to "tallest chimney in Scotland." Cajole former reality show contestants and field producers into giving you interviews despite the nondisclosure agreements they signed. Watch episode after episode of The Amazing Race while taking copious notes. Read other people's reality-television-based books to make sure yours will be completely different.

Days 17-18: Make a comprehensive outline of your new book.

Day 19: Start rewriting. Make a friend hold your hand while you highlight those 70,000 words and hit delete. It's going to hurt.

Days 20-61: Wake up every day at 6:00 AM, panicked that you haven't yet finished your daily word count. Get sick again, twice. Buy a new laptop when your graphics card suddenly dies. Find yourself doing things like wandering aimlessly in a sleet storm in search of chocolate-covered potato chips. Fall on the ice, bruise your tailbone, and attempt to do days' worth of writing while lying down, your legs propped on a giant pillow.

Cease the following activities: showering, wearing clothes other than pajamas, cleaning, venturing out of the house, knowing what day it is, talking about things other than your deadline, eating food that hasn't been delivered to your door by a non-English-speaking guy on a bike, seeing other humans besides that guy on a bike.

Eat an entire bag of Cadbury Mini-Eggs in four days and wonder why you feel queasy. Realize near the middle of February that you've just written 50,00 words in 30 days and have accidentally completely National Novel Writing Month (in the wrong month.) Watch season after season of Gilmore Girls, because it's the only thing your brain can focus on after long days of writing. Read Rainbow Rowell’s Eleanor and Park for the first time, then contemplate tossing your brand-new laptop out the window and letting her write ALL THE BOOKS, since she clearly does it much better than you.

Days 63-66: Read over new first draft. Discover that it is terrible — somehow, you've managed to write something that is both too action-packed and incredibly boring. Insert comments in the margins as you read, many of which say things like, "Noooooooo" and "Just... make this better" and "OH DEAR GOD, THIS SUCKS." When you're finished, discover you have inserted 450+ comments. Curl into a small ball and text all your friends to tell them you hate your book with every fiber of your being.

Day 75: Address that very last comment. Run the spell-check and send off your shiny new draft, attached to an email that basically reads, “I really hope you like this, but it might suck, please don’t judge me.” Then force yourself to take some much-needed time off, as you have lost all perspective on your book… and everything else in your life. Wash your hair. Put on real pants. Pick up the dozens of takeout containers scattered all over your floor. Stop wringing out your poor depleted brain like a long-dry sponge and gently reintroduce it to museums and movies and books that weren’t written by you. Bake things. Sleep for days.

Six weeks later: Receive an email from your editor that reads, “My notes will be minimal. I think you did a bang-up job.”

Die of relief. Eat one last cookie to celebrate. Or two. Actually, might as well just finish the whole box.