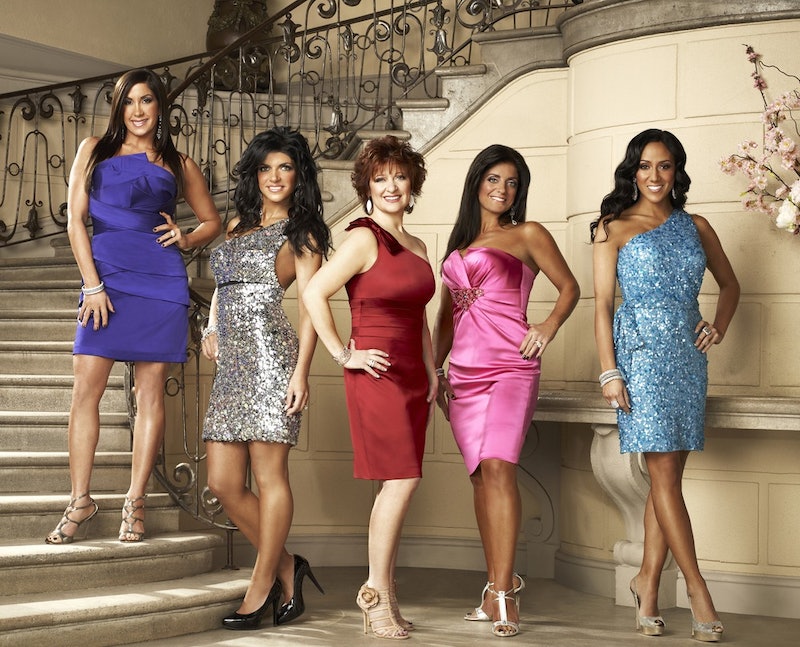 This can't be the first time someone has asked this question about the "characters" on The Real Housewives of New Jersey, but Sunday night's "It's My Party and I'll Fight If I Want To" reignited the ever-burning question: Seriously. Who is the worst person on The Real Housewives of New Jersey? Because it certainly feels like everyone on this show is competing in some sort of weekly competition measuring villainy and one's ability to cackle like a witch over a bubbling cauldron of self-tanner.

Kathy, The Niece Who Can't Apologize

Look, she can't apologize to her uncle (who, for those of you just joining us, is Teresa's father). So what? At least she expressed this on National Television, which is apparently where he learned of her colossal grievance (she called him a few nasty things on the also nationally televised RHONJ reunion). Hey, that's how these people communicate. Okay?

He didn't exactly steal his father's Ferrari, but he and his aunt did take the car (on his provisional licence, no less) for a joy ride without permission. Still, the kid is a spoiled 15-year-old. How else did everyone think this was going to go?

All he did was say he was going to punish his son for taking his sports car, decide upon seeing his son that he didn't feel like punishing the boy, and pin the saltiness about the Ferrari-thievery on his dear wife. What's the harm in that?

Jacqueline, The Perfect One

Are you kidding me? She hates working out (a girl after my own heart) and the worst thing she did was laugh when Caroline told her Teresa expected an apology. This woman has bigger fish to fry, like, you know, real life problems.

Caroline, The Instigator Parading As a Mediator

Caroline would like us all to believe that her only goal is making Teresa's family whole again, but her actions don't exactly speak to that point. She does regularly sit down with Joe and Teresa in an attempt to smooth things out, but she also runs right over to Jacqueline's to giggle at the intelligence she's obtained. Sure, that's super swell behavior.

Oh come on, that poor little schmuck is a sweetheart.

Joe Giudice, The Most Clueless Person in Reality Television

First there was "Dust in the Air," now there's "So some girl called my daughter a 'hairy grill,' ehhh fogettaboutit." He may not be Father of The Year, but he's still not the worst person on this show.

Joe Gorga, The Man Who Needs to "Put a Plug" In His Rear (Among Other Things)

Yes, he says things like "The soup I just ate immediately came out of my ass" and is generally pretty disgusting, but the guy is legitimately ill. We'll temporarily forgive his attraction to his own capacity for rage and revenge on Teresa (and his gift for TMI) and give him something of a pass this week.

She's a spoiled girl who gets an amazing birthday party at a laser tag range where her parents let her wear a sparkly, see-through tank top with an orange sports bra under it and the only words she can muster for Teresa, her dear mother, are "Mom, get away from me now." That doesn't make her a terrible person, that makes her a 12-year-old with ridiculously wealthy parents.

Melissa played dumb about how long it took her to visit her father-in-law when he was in the hospital, so she's not doing great. Pile on top of that the fact that she's so resolutely set on remaining angry with Teresa that she picks fights with Caroline for trying to help the situation, vows that Teresa's issues are not her problem (but damn, if she isn't going to bring them up at every possible moment), and hides behind "this is between me and my husband" whenever she doesn't want to deal with something. She's not the worst, but she's not looking all that great.

Teresa, The Woman Who Once Flipped a Table Over An Argument

Yes, my dear, you are a victim of reality TV magic: something that played on your existing reservations about your brother's wife Melissa and turned them into a family-splitting year-and-a-half-long saga. Yes, you didn't mean any of it. But you need to get over it, stop trying to be the best person and accept that you're going to have to suck it up and apologize to get your family back. Oh, and letting your despicable friends refer to your former friends' "fat asses" on national TV should probably stop if you're hoping for a permanent solution. P.S. Stop using Gia to elicit an emotional response from your brother Joe. Gia knows what you're doing, and so does the rest of America. Do it yourself, woman.

Kim and Linda, The Worst Friends Ever

You guessed it. The worst people on RHONJ are Teresa's "friends" (or the only people who will speak to her while she's in exile). If their needless instigation (Kim's performance during Season 4's finale is enough to make your stomach turn... and then flip a few more times before mimicking an internal belly flop) wasn't enough, these women are the worst offenders of modern lady code. Yes, Joan Rivers gets away with fat jokes, but she only gets away with it because you could turn around and call her a melted candle stretched over a Sleep No More mask and she'd giggle right along with you. That's not how these ladies work. Linda, the trainer, calls up Teresa this episode for the sole reason of calling Kathy and Jacqueline "fat asses" and making fun of them for pretending to exercise when they're "so fat" they've "never even seen a gym." Teresa cackles along with her hellish friends, but she's desperate for acceptance and would laugh at anything they utter. The sad truth is that these two women are being themselves, and to them, fat-shaming (unnecessarily, if I might add) is a totally acceptable and worthwhile endeavor. These women not only have no lives, they are actually the worst people on this show.

Congrats, Teresa! It's not you!