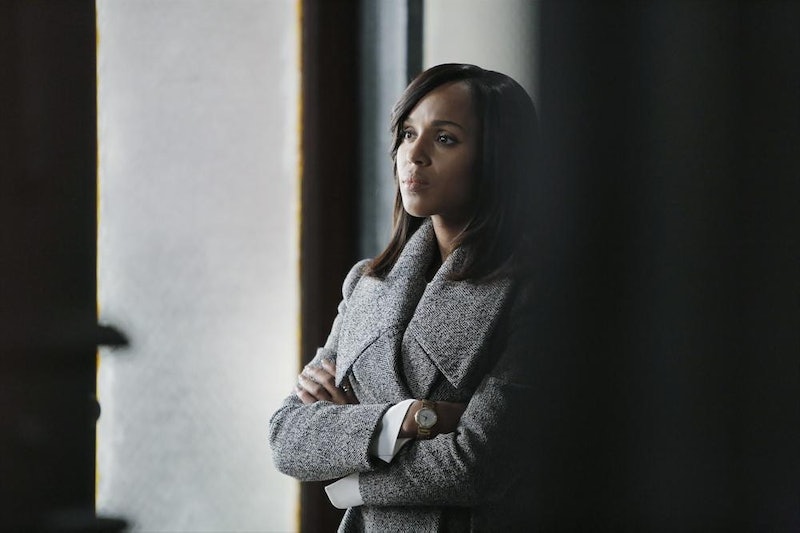 In the three and a half years that it's been on air, Scandal has delivered us some great twists, but this latest one is a doozy. And now the question on everyone lips is the same one as the end of last season: Where is Olivia Pope? Because we need to know.

It's telling, though, that of all the threats that Olivia normally faces, this is the one that I don't think any of us saw coming. I mean, getting kidnapped by the vice president and the Republican Party in order to blackmail the president into starting a war? Where did that come from? This is Andrew, we're talking about. The most interesting thing he'd done until now is sleep with Mellie. Who would ever have thought?

Now, on the one hand, this move is great: Olivia Pope abducted? That is the most dramatic turn this show has ever taken! On the other hand, it's kind of annoying. The great Olivia Pope abducted as part of someone else's game, a pawn for other people to use to manipulate the (infinitely less cool) Fitz? That is so beneath her.

But, again, the real question is where on Earth Olivia Pope is? Is she being held some place? Are they going to hold her for ransom? Threaten to kill her in some staged terrorist attack? Are they going to try to make her turn against the president? What exactly is their end goal here?

Ultimately, I really, really hope that this whole story arc ends with Olivia Pope either rescuing herself — we all know she's more than capable of handling herself — or with Jake and/or Huck rescuing her at the very dramatic last minute after she has obtained some sort of vital information. Because Olivia Pope is too cool to become just a pawn in someone else's game, one she didn't even see coming.

So where is Olivia Pope? Only the winter premiere will tell.