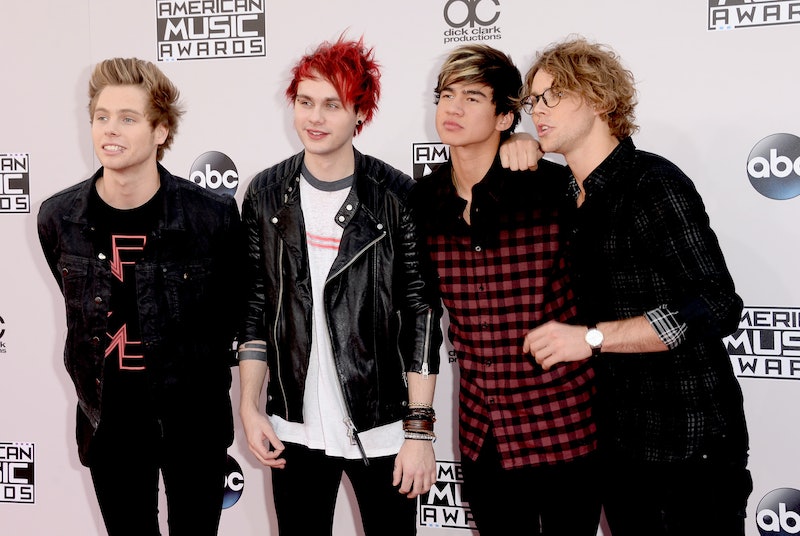 It feels like so many great new artists burst onto the scene this year all at once and it would be impossible to choose just one for the American Music Awards' New Artist of the Year Award. Iggy Azalea dominated the airwaves with "Fancy" (featuring Charli XCX), "Black Widow" (with Rita Ora), and "Problem" (with Ariana Grande). Sam Smith crooned his way into our hearts with his hit tunes "Stay With Me," "Latch" (with Disclosure), and "I'm Not the Only One." Meghan Trainor got blunt with us in "All About that Bass" and "If Your Lips are Movin.'" Bastille rocked the charts with "Pompeii." And 5 Seconds of Summer's smash debut "She Looks So Perfect" gave us a new boy band to swoon over. But in the end, 5 Seconds of Summer took home the AMAs trophy.

Bandmembers Luke Hemmings, Michael Clifford, Calum Hood, and Ashton Irwin took the stage to accept their very first AMA and the first thing they did — the boys told fellow artists Bastille that they were awesome. 5SOS then thanked their management and said that "this shows that a little band from Sydney can do great things."

This award was actually chosen by votes on the AMA website leading up to and during Sunday night's live ceremony (voting ended at 9 p.m. ET Sunday night. Should we consider this win — and category — a prelude to a very competitive race for Best New Artist at the upcoming Grammy Awards in 2015? Because it just feels like there's almost too much talent to go around this year. We'll find out when the Grammy nominees are announced next week on Dec. 5.

More like this
'The Summer I Turned Pretty' Using “Cruel Summer” Has Twitter Begging Taylor Swift To Release A Music Video
By Radhika Menon
What Is Ariana Grande's Net Worth? When It Comes To Money, She Has No “Problem”
By Hugh McIntyre
Kate Bush Reacts To “Mad” Revival Following 'Stranger Things' Cameo
By Sam Ramsden
Tristan Thompson Plays Drake’s Best Man In A Music Video Wedding With 23 Brides
By Grace Wehniainen
Get Even More From Bustle — Sign Up For The Newsletter