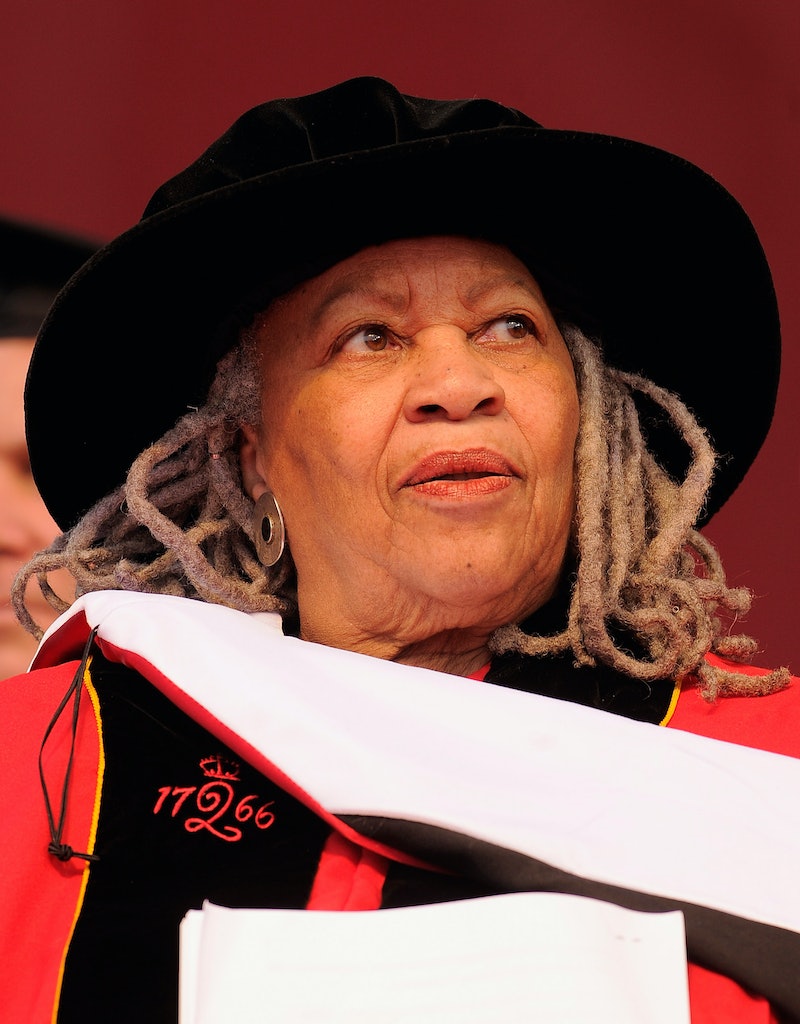 It’s been a long time since I read her Pulitzer Prize-winning novel Beloved, but seeing author Toni Morrison’s Wednesday night appearance on The Colbert Report makes me want to pull that book off the shelf and read it again, for about the fifth time.

In high school, my mom gave me a paperback copy of Beloved. It had the big gold Nobel emblem on the cover, right next to the haunting image of a woman in a prim white dress and straw hat, her face barely visible, like a ghost. Because I was a brooding teenager who thought that everything my mom did was out of touch and unbearably lame, I tossed the book into a closet and read some Morrissey lyrics instead.

But then one day, out of boredom or curiosity or because I knew deep down that my mom was usually right (SIGH), I pulled out Beloved from the closet and started reading. And I read it again, underlining passages as if I were reading a sacred text, which I kind of was. I wrote papers (several papers) analyzing the story and Morrison’s language and the nature of motherhood and sacrifice. I was a 17-year-old living in suburban Houston, Texas — what the hell did I know about motherhood and sacrifice? I knew what Toni Morrison’s writing made me feel, that’s what.

If you’ve been moved by Morrison’s writing over the years, you probably know that feeling. I don’t often get star struck (except that one time recently when I saw Amy Poehler in a public bathroom, got crazy eyes, and blurted: “I can’t believe we’re in the bathroom together!”), but I’ve always thought that if I ever met Toni Morrison I might flat out faint. She’s a rock star poet; she’s a magician when it comes to the English language. So because her Colbert interview reminded me how truly amazing she is (at least from a distance and on the page), here are four ways Toni Morrison will rock your world:

She’ll make you want to write

Trying to unravel the mystery of Morrison’s sentences is a futile task. It’s better to just enjoy them and puzzle over them and think, “How the hell does she do that – I’d like to do that too!” Chances are you can’t do what she does (and you shouldn’t) but her writing will inspire you, and push you to do better, even if she’s writing lyrical passages about motherhood and you’re writing jokes about Kim Kardashian’s ass.

She’ll make you stand up straight

Morrison has a regal presence, which is maybe why I feel like I’ll pass out if I ever shake her hand. She’s just got that thing, that thing that makes you want to shut up and listen. She doesn’t act like a fool and she could teach us all a thing or two about public speaking. Like, how to do it and not sound like a fool.

Her writing is bold, challenging, difficult, and emotional. If you’re being timid and trying to explain yourself too much when you’re writing, just take a look at Song of Solomon or Sula or Beloved, and you’ll be reminded that good writing can and should challenge people. Toni Morrison is truly gifted at this, so do it in your own way, and in your own voice. But reading her will give you a kick in the ass and a shot of courage.

If you’re ever getting uppity about yourself or your work (there’s a different between “uppity” and “confident”), turn to page 126 in Beloved and read a few lines. You can flip to any page, really, but I just thought I’d throw out a number. If her talent doesn’t humble you – you might need to see a therapist. Being humbled can be a good thing. It pushes you to do better. Just don’t let it reduce you to tears because you’ll never be as good as Toni Morrison. Not everyone can win the Nobel Prize, and that's OK. You can strive to to better, though, and that's almost as cool as winning a Nobel Prize... sort of.