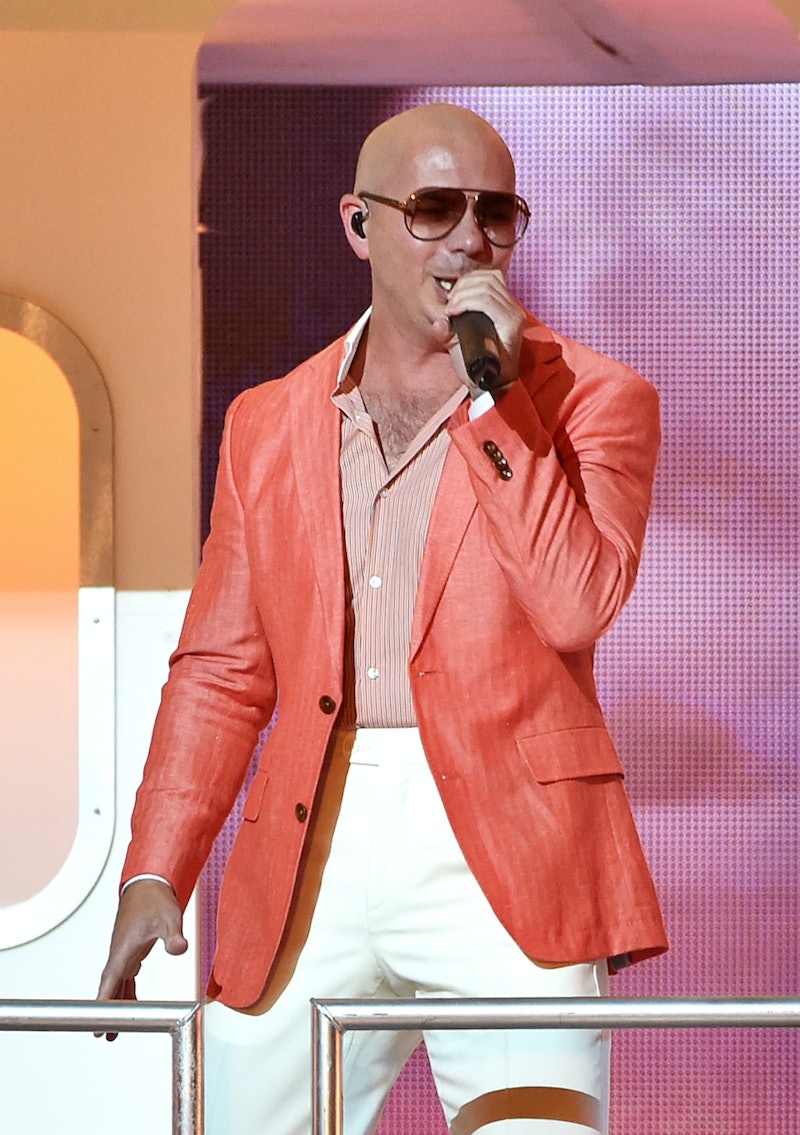 Pitbull sure talks a big game. His rap lyrics are pretty sexual — at least in my opinion. He is always collaborating with hot singers like Jennifer Lopez and Shakira, but what's his deal? Is Pitbull making some sweet music with a special lady behind the scenes? More to the point, is Pitbull single? He is one pretty mysterious dude. From those annoying yet undeniably dance-able songs to the ever present sunglasses on his face, Pitbull keeps the people guessing, and the same goes for his love life.

His songs are always on the radio, he's always performing at award shows, his beats are used to endorse products, yet his omnipresence does not cross over into his personal life at all. I never see anything about Pitbull in the tabloid magazines and this makes me even more curious about his romantic life. Is he dating? Is he looking for a girlfriend? Is he just trying to be "Mr. World Wide" and act like an international plaer? Is he in some kind of secret long term relationship? I feel like I am always bopping my head to Pitbull songs, yet I really know nothing about him. Personally, I like my rap verses with a side of gossip.

A Man of Mystery

Pitbull is a very tough man to figure out. I did every variation of a Google search that I could think of and it was still difficult trying to figure out what is going on in Pitbull's love life these days. From the looks of it there seems to be no lady who is around consistently, but for all I know the rapper is just super sly and knows how to keep a secret. The lack of a woman present and some confirmation bias tell me that the rapper is single. Maybe he will end up getting secretly married over the weekend and prove me wrong, but it is highly unlikely.

A Man With a Past

Pitbull is a father of four children. Two of his children he had with Barbara Alba, his most recent ex-girlfriend, so we do know that he has dated someone at some point. (For the record, the name of the other children's mother seem to be unavailable.) Bull and Alba broke up in 2011 and apparently there was no bad blood. In regard to child support, Alba's lawyer stated, "Pitbull is a gentleman. This was resolved amicably."

A Man Looking for a Friend

While it is very unclear if Pitbull has a special lady in his life, if you want it to be you this is what he's looking for: "It's best to have a relationship with someone where it's open, where you can say, 'What's your fantasy tonight? More than a girlfriend or a wife, I want a friend." Oh, tell me more. He's also said, "I've a very solid old-school mentality; the woman orders first, I open doors for women. But I'm like a dirty, nasty gentleman. A woman wants to feel protected and provided for, but at the same time she wants to feel like a woman when you`re making love to her." It seems like very few women have the opportunity to actually date Pitbull, but it suonds like it would be a very interesting experience to say the least. Maybe he will have a new album to promote and open up more about his personal life? That would be ideal because I hate unsolved pop culture mysteries.

More like this
The Controversy Around Beyoncé's “ENERGY”, Explained
By Frances Stewart
Who Is Camila Cabello Dating? She's Getting Cozy With Lox Club CEO Austin Kevitch
By Radhika Menon
Leona Lewis & Husband Dennis Jauch Welcomed Their First Child
By Darshita Goyal
Who Is Bad Bunny Dating? Gabriela Berlingeri's Vocals Are Featured On His Song "En Casita"
By Radhika Menon
Get Even More From Bustle — Sign Up For The Newsletter