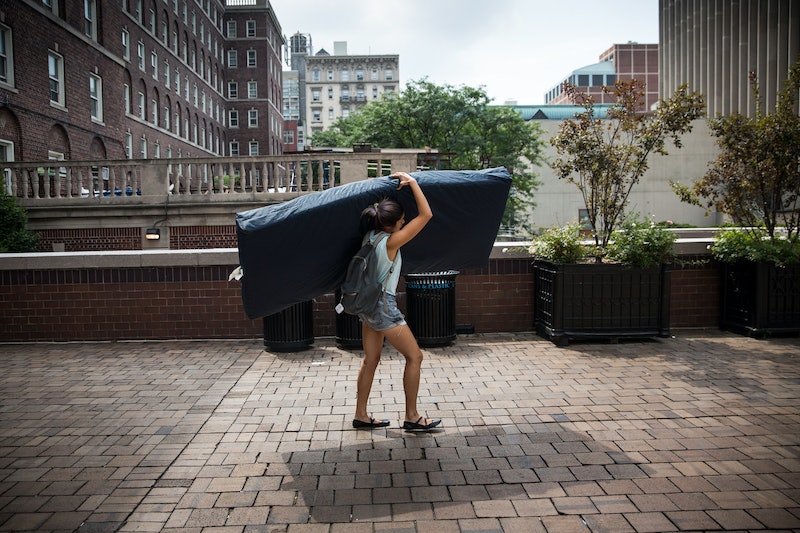 Rape culture. That term originated in the 1970s, just a few years after women started to practice this little thing called "consciousness raising," speaking publicly, privately, candidly about their sexual assaults, rapes and sexual violence. Nearly 40 years later, consciousness raising is not a relic, an outdated model of feminist organizing saved for our second-wave sisters — it's possibly occurring more than ever on global Twitter timelines, Tumblr pages and Facebook newsfeeds. And, with the latest sexual assault bombshell dropped at a prestigious institution — this time, the sexual assault allegations against University of Virginia fraternity Phi Kappa Psi — it appears consciousness raising is not going anymore. At least, not if sexual assault and rape survivors have something to say about it.

Following the publication of a Rolling Stone feature by journalist Sabrina Rubin Erdely — and the subsequent response from disgusted readers, some of whom are UVA students and alumni — UVA suspended all of its fraternities on Saturday, including one that's now under criminal investigation for sexual violence. In her deeply reported feature, Erdely breaks the story of Jackie, a young woman who was gang-raped two years ago by seven men at Phi Kappa Psi. As Erdely reports, none of the men were disciplined, either by the university or the local police force, in any way. In fact, Jackie was allegedly urged, by both her friends and the university, to not formally file reports or complaints about her brutal rape. As it turns out, she was not the only young woman who faced a run-around from the university, which comes off in the article as more concerned for its PR image and prestige, rather than the safety and stability of its student victims.

As UVA reeled in the wake of its crumbling image and Greek life, the hashtag #SolidarityIsForRapists surfaced on Twitter — another poignant form of 21st century consciousness raising. The hashtag, which is triggering at times, reminds us that yes, rape culture exists — and justice, unfortunately, does not.