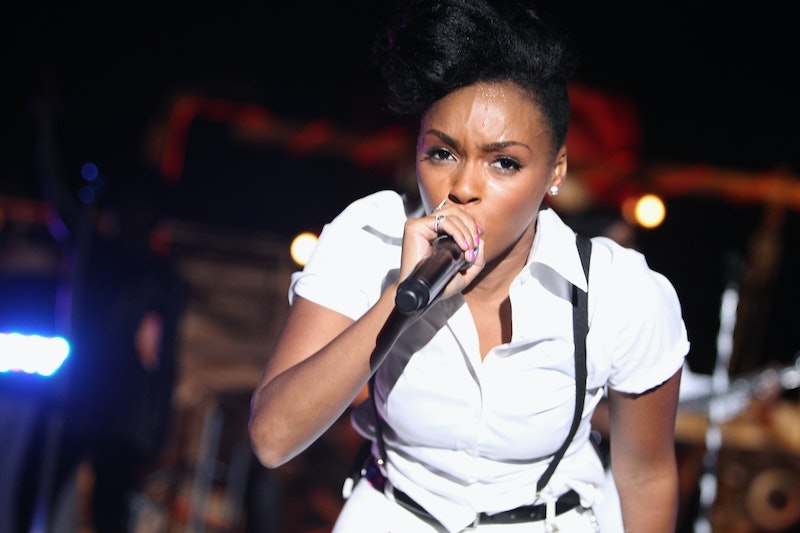 Janelle Monáe has just released one of this year's best pop albums, Electric Lady. But of course, instead of talking about the music on the album, some people are wondering if Monáe has her own electric lady. Pride Source questioned Monáe specifically about the lyrics of "Givin' Em What They Love," in which she describes a woman following her to a lobby for some "undercover love." She resonded:

... I will say that a lot of my work always comes from an authoritative stance, so it may not be about me; it may just be about a story, or something that I've witnessed, or my imagination. You just never know.

This isn't the first time Monáe's sexuality has come into question, and she's been asked about it in more than one interview — but she always defaults to the tongue-in-cheek "I only date androids."

Monáe shouldn't have to respond — her sexuality isn't really an issue. And honestly, that may be smarter for both Monáe and America. This way, she can be seen as a role model for people from a rainbow of sexualities: gay, straight, bisexual, tomboys, even those who choose not to label their sexualities. And this way, she can also introduce some weirdness into mainstream America without being written off as a "gay artist," like the media has done with the sudden influx of gay rappers.

Thankfully, Monáe sees it this way too. She uses the concept of androids in her music as a metaphor for marginalized groups in society, including the gay community, and has frequently spoken in support of the community. But she also believes in not labeling her significant queer following, saying "What is queer, what does that mean? I don’t believe in categories. I respect people for who they are, I’m attracted to that more than anything."

Monáe has made it clear: it's not that she's ashamed of who she is, it's that she doesn't believe in limiting herself with labels. Could it be a publicity move, to save her from potentially alienating her fanbase? Sure. But the current state of pop music is so far removed from the days of David Bowie and Prince, both men who were confident in playing with their gender identities. Few women pop stars (aside from Gaga's brief and grating turn in drag) have dared to do the same, and there are no prominent "gender-bending" pop stars today.

Having those kind of role models in pop culture is important, so even if it's just good PR for Monáe it's even better for American audiences. And she seems more than comfortable with flying her gender-bending freak flag not just as a trend, but as part of who she is:

I think it's awesome. I think it's uniting; I'm a uniter. I won't allow myself to be a slave to my own interpretation of myself nor the interpretations that people may have of me. I just live my life, and people can feel free to discuss whatever it is that they think and use whatever adjectives they feel. It's a free country.

More like this
Harry Styles Helped A Fan Come Out As Gay In Dramatic Fashion At His London Show
By Jake Viswanath
J.Lo Uses They/Them Pronouns To Introduce Her Child Emme For A Special Duet
By Jake Viswanath
Tove Lo Wants A Safer World
By Sam Ramsden
Watch Harry Styles’ Sweet Reunion With His Primary School Teacher
By El Hunt
Get Even More From Bustle — Sign Up For The Newsletter