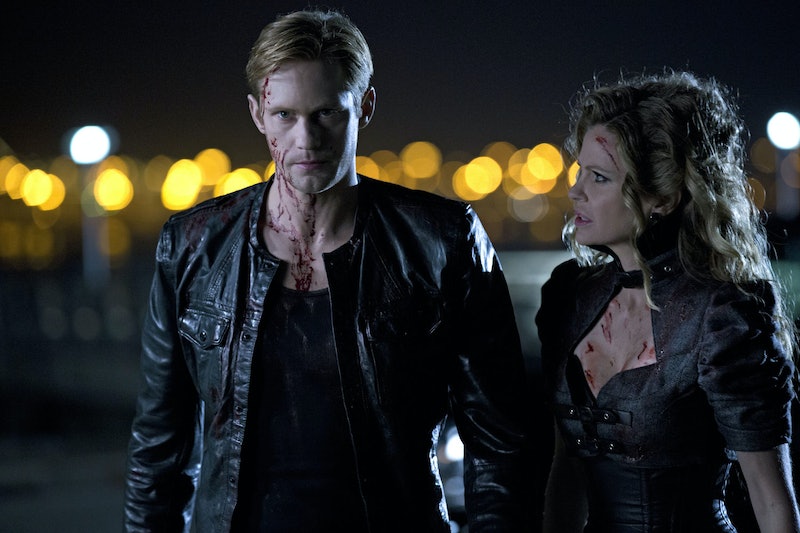 True Blood has never been the most sense-making series about supernatural beings who often consume blood as sustenance. And, to be fair, we never signed up for this ridiculous, vampy romp of a series for its logical conclusions about human and vampiric life. Yes, it started with the promise of a discussion of civil rights as that fight might apply to a species of former humans with human sensibilities, but by the time we were hooked, the only promise it was delivering on was Bill's ability to have sex with Sookie like his life depended on his bedroom impression of a Sixth Avenue jackhammer. HBO's flagship vampire show does pretty much whatever its little lifeless heart desires and all we can do is hope to understand just an ounce of what it's serving up.

Luckily for you, some of us actually make a living helping you understand just what exactly is going on in the season premiere, whose title "Who Are You, Really?" is the exact same thing we all ask ourselves every time we settle in for an episode of True Blood. (The answer? We just do, now shut up and tell me what the hell just happened.)

Billith Isn't As Bad as We Assumed

As it turns out, Bill doesn't really know what's going on with his new lease on life. He knows the gang left him at the Authority and Jess tells him it's because he was "a monster." He knows he can't be staked and that there's something "special" about him since he left the Authority headquarters. Still, when he tells Jess he needs her guidance because he's not sure what's happening, we believe him, mostly. It's just unfortunate that shortly after that conversation, four Lilliths appear to him and possess him all over again. All we know is that this is going to be a long season.

Warlow is a Bigger Deal Than We Thought

This mysterious vampire isn't just the guy who killed the Stackhouses; he's also Lillith's progeny and an important character in the Vampire Bible. It's no wonder he looks like Christopher Walken in Sleepy Hollow and possesses the power to convince poor, temporarily-racist, hitch-hiking Jason to tell him his entire life story before he disappears and sends the stupider Stackhouse careening for a tree in a speeding car. It's not really clear how that particular incident makes Sookie's letter from her father (which we learned last season, secures Warlow's right to Sookie as a piece of property, Rumplestiltskin-style) light up in the night, but you can bet that's a part of next week's big mystery.

Sookie and Eric Are the Couple to Ship This Season

When Sookie tries to stake Bill (or Billith, it was a little murky what with the lack of blood-birthday suit and all) in order to keep him from killing Eric, her choice is made: This season is the ballad of Sookie and Eric. Sookie will "always love Bill" (as she tells young Jess), but she's mad about Eric. Not mad enough, however, to exile him from her house after he signs the property over to her as a thank-you. It's not over though: Nora immediately picks up on Eric's love for Sookie, and it's clear she looks to exploit it later, which will inevitably bring the golden couple closer. It's unlikely anyone objects to this directional choice: Sookie and Eric always were the better pair. (Come at me, Bill/Sookie Shippers.)

He's still riding the vampire blood wave and it's going to his head (no, the other one). He partakes in the ritual of eating the flesh of the former pack leader, which is to be expected, but he also flirts with a naked werewolf named Danielle right in front of Ricky's impossibly symmetrical face. Lucky for fans of powerful female characters and sexual power-play, Ricky takes matters into her own hands, and catching Danielle and Alcide in the act, makes both wolf and she-wolf her subordinates before reminding Alcide that she's his "number one bitch." Alcide may be the pack leader, but it's clear Ricky's going to be the one running the show. Ah, the power of one woman's sexual magnetism in a pack of wolf-men.

Andy is a Dad And It's Weird (As Expected)

Terry and Arlene are helping Andy take care of his four fae babies, and of course, he doesn't think he's fit to be a father. One Arlene-brand inspirational-speech-about-parenting later, and Andy's all set. Well... he's all set until his babies wake him up in the middle of the night and they're suddenly in their terrible twos and can talk. Hey, at least we won't have to deal with cooing Papa Andy any longer. It was pretty sickening.

Pam Loves Tara, She's Just Too Tough To Admit It

Pam is still in love with Eric, but as is the case with any first love, Eric will never not be a part of her. Still, Pam insists to a very love-sick Tara that the young vamp can never replace Eric. Tara is crushed (after all, she just made out with Pam in a prison cell after risking her life to save her). But, when the U.S. government comes to seize Pam's bar in accordance with the Louisiana Governor's prejudiced new law, Tara leaps to protect her lover from the feds' guns and winds up getting shot for her efforts. Pam's painful wail of "Tarahhhh!" says it all. She likes her. She really likes her. (Wherein "like" means "love.")

The Governor of Louisiana Is Shady

The Gov is offering the owner of Tru Blood a ready-to-use factory so the company can start producing more Tru Blood and thus set the vampire-human balance back to where it should be. However, let's just consider the sinister nature of this Governor person. A single look at his snivelly, little face tells us he's not to be trusted. He's already come out as racist against vampires, unreasonable in his safety measures against the bad vamps, and a pro-gun maniac. If we were supposed to trust him, the writers spent a hell of a lot of time making him incredibly unlikable. Face it: this guy is planning something terrible. He's not angling to restore peace. Narrative cues say so.

Luna is Dead And The Government Has Learned About Shifters. Drat.

After pulling her Newlin stunt last season, Luna has spent all of her shifter mojo. The result is that her daughter is safe, Newlin is exposed, and Sam manages to escape, but unfortunately her stunt also unleashed a series of major problems. Number one: Luna is dead and Emma is now motherless and totally dependent on Sam, who's great but not exactly a tested parental figure (remember, he was in love with Sookie, not just trying to guide her). Number two: The clip of Newlin becoming Luna is all over national TV, raising questions among humans about the previously unknown shifter species and putting Sam's life in danger. Number three: Okay, this isn't a problem, it's adorable. Lafayette is guarding Merlott's for Sam and winds up taking care of Emma, like the Mother Goose from Heaven that he is, while Sam figures his tight spot out.

That's about everything you need to understand to jump into Season 6 of True Blood. And yes, we only stuck to the important parts. If you're really serious, you may want to start watching this show with a notepad and pen handy. Things are only going to get messier from here.

More like this
Does 'Locke & Key’s Ending Mean There Could Be A Season 4?
By Sophia Moore
Everything To Know About 'RHOC' Season 17
By Brad Witter and Sophia Moore
'The Simpsons' Will *Finally* Address How They “Predict The Future”
By Sam Ramsden
The 'PLL: Original Sin' Creators Say A’s Identity Will Be “Very Clear” By The Season Finale
By Alyssa Lapid
Get Even More From Bustle — Sign Up For The Newsletter