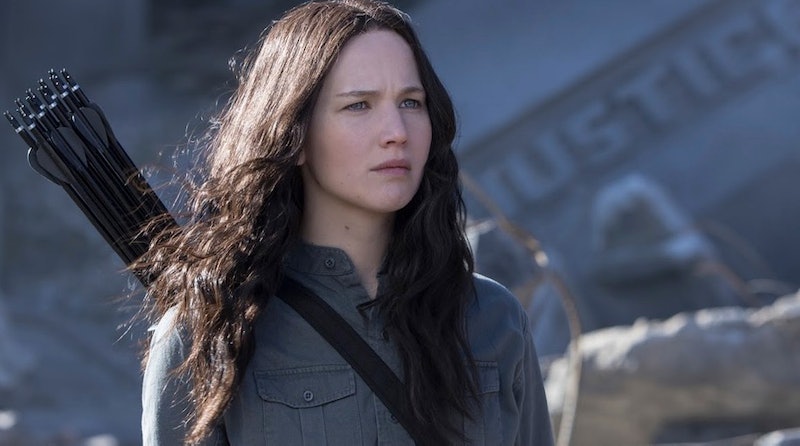 A lot of Internet ink has been spilled throughout the past few days and weeks over the fact that Jennifer Lawrence sings in The Hunger Games: Mockingjay, Part 1 . It was a task Lawrence was admittedly terrified of, though she pulled it off quite nicely for someone who swears she can't sing. It's worth noting, though, that "The Hanging Tree" is more than just an opportunity to hear one of America's favorite Oscar-winners put her pipes on display. "The Hanging Tree" is perhaps Mockingjay's strongest pieces of symbolism, and it follows through to the book's finale.

The scene where Katniss sings the song to Pollux and the rest of her propos scene is, according to the book version of Mockingjay, the first time she sings the lyrics aloud in ten years. "The Hanging Tree" is a song forbidden in Panem — Katniss' father taught it to her when she was a child, but it's not until she was older that she really began to confront what the song meant. As she puts it in that first singing scene in the book:

We didn't sing it anymore, my father and I, or even speak of it. After he died, it used to come back to me a lot. Being older, I began to understand the lyrics. At the beginning, it sounds like a guy is trying to get his girlfriend to secretly meet up with him at midnight. But it's an odd place for a tryst, a hanging tree, where a man was hung for murder. The murderer's lover must have had something to do with the killing, or maybe they were just going to punish her anyway, because his corpse called out for her to flee. That's weird obviously, the talking-corpse bit, but it's not until the third verse that "The Hanging Tree" begins to get unnerving. You realize the singer of the song is the dead murderer. He's still in the hanging tree. And even though he told his lover to flee, he keeps asking if she's coming to meet him. The phrase 'Where I told you to run, so we'd both be free' is the most troubling because at first you think he's talking about when he told her to flee, presumably to safety. But then you wonder if he meant for her to run to him. To death. In the final stanza, it's clear what he's waiting for. His lover, with her rope necklace, hanging dead next to him in the tree.

I used to think that the murderer was the creepiest guy imaginable. Now, with a couple trips to the Hunger Games under my belt, I decide not to judge him without knowing more details.

And it's not until later in Mockingjay that Katniss grappled with what the song meant in the context of her world and her relationship with Peeta, the Games, and the revolution. Peeta and Katniss' communication in Mockingjay, Part 1, for instance, is almost entirely of the kind depicted in the song, and at one point Peeta literally does call out for Katniss to flee. Considering the last time they saw each other was next to that tree in Catching Fire, and that Peeta looks more and more corpse-like throughout the first half of Mockingjay, those are some pretty bleak but powerful parallels. It's stuff like that that also makes it even more bleak and powerful when, in the film, the rebellion takes "The Hanging Tree" as their protest song. Of course, for the revolution version Plutarch changed the lyric "necklace of rope" to "necklace of hope."

Later in Mockingjay's book version, verses of the song plays through Katniss' head at times — like when the possibility of bringing Peeta back to Capitol ground comes up and both he and Katniss imagine the possibility of the worst:

Peeta. Back in Snow's hands. Tortured and tormented until no bits of his former self will ever emerge again.

For some reason, the last stanza to "The Hanging Tree" starts running through my my head. The one where the man wants his lover dead rather than have her face the evil that awaits her in the world.

Are you, are you/ Coming to the tree/ Wear a necklace of rope, side by side with me/Strange things did happen here/No stranger would it be/If we met up at midnight in the hanging tree.

By making the song a revolutionary anthem, "The Hanging Tree" is already being used slightly differently in the movies than it was in the books. But the strong (and disturbing) personal connection Katniss has to the song — and in the book Peeta also has a connection, as he heard Katniss' dad singing it when he was a kid, too — is still very much present and accounted for. It will be interesting to see how much Mockingjay, Part 2 leans into the song's different layers.