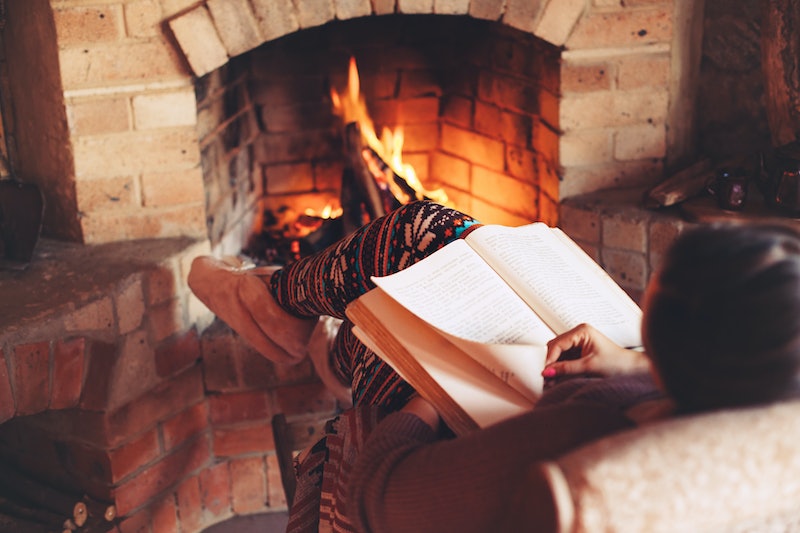 December is an ideal time for settling in with a thick read. A well-picked book is essential whether you're in for a long plane ride home for the holidays and you need a distraction, or your extended family has gotten into a political debate after a few glasses of wine, and you need to exit to the living room to read by the light of the Christmas tree to avoid them. (No, just me? Moving on.)

There are quite a few good books released this month — things for fans of history, for instance, plus a new Murakami (!) — but if I have to play favorites, I'd say I'm most excited about Ali Smith's How to Be Both. It's actually two books in one (a double-gift if you want to give it!) in a complicated genre-bending sort of way.

Early December is also a time to worry about finding the perfect gift. I'm sure you'll be gifting books, but make sure you don't forget about giving something to yourself, too, to keep you entertained throughout the dreary winter. The ones on this list are a great place to start.

Here's a reading list that'll get you through the holidays:

Any early twentysomething who's having a rocky time can probably relate to Claire, a recent Oxford graduate, who moves to Belfast with her odious academic boyfriend — she's having a rough go of things, too. Claire works in a seedy bar, has sex with someone she shouldn’t, and flounders in all the familiar ways someone in your early 20s does. She’s also self-destructive and recently started cutting herself, which can sometimes make this a painful read. When she goes home to visit her mother, she stumbles across family secrets that further complicate her life.

You have to be a patient reader to appreciate the subtle grace and realism of Offcomer. The beauty in Baker’s first novel (originally published in 2002, and now reissued) is her commitment to realism: the introspection and evasions of youth, and gradual internal change (as opposed to the epiphanic aha! kind) are deeply honest. A heads up: If you’re the kind of reader who's turned off when nothing really happens, or you think a show like Girls is too self-indulgent, you may want to pick something else from the list below.

If you're a diehard Murakami fan, chances are you could recognize one of his books, even if his name weren’t attached to the pages. Known for his unique, fantastical stories (and recurring tropes: dream sequences, cats, images of ears, mysterious and slender girls, just to name a few) this Japanese writer has created his own distinct style of magical realism. Murakami’s newest work is a novella about a boy who becomes a prisoner in a labyrinth beneath his public library. Designed by Chip Kidd, nearly every other page contains a beautiful image, often an abstract representation of what is happening to the narrator. This sinister story and gorgeous artwork come together like an unforgettable nightmare. This one has some major gifting potential, FYI.

There’s a great story associated with the creation of this book, Portugusese novelist José Saramago’s first. The book was nearly lost forever when the author sent it to a publishing house in Lisbon in 1953 and never heard back. When the publishing house was changing offices more than three decades later, they found the manuscript of Skylight in a drawer. At this point, Saramago was well-established in the Lisbon literati and he proudly refused their belated offer to publish it. After his death, however, his estate felt that the public deserved a chanced to read the book.

Saramago’s Skylight is an artful depiction of the every day, and the unknown interiors of the people with whom we live. In the novel, husband and wife are miserable mysteries to each other more often than not, and sisterly love is fraught with unsaid drama. A kept woman entertains her patron, though she’s tired of him; a woman married to a cheating husband wins their battle of wills with her absolute scorn; an aunt endeavors to find out what secrets her nieces are keeping from her. With an omniscient narrator presiding over the neighbors in a small apartment building, the reader catches a glimpse into the surprising ways our lives are interwoven with the people around us. Saramago makes a convincing case for the power of proximity as the strongest force in a relationship.

This first book is understandably less polished than Saramago’s later works, but it’s fascinating to see the germ of his theories about love and how people should, above all, be decent to one another here in their earliest forms. He was compelled by the same themes his entire life, and now Saramago fans can discover Skylight like an entryway to the past.

I absolutely adored this book, as did many others because, having been published in England in August, How to Be Both was shortlisted for the Man Booker Prize 2014. It also snagged the Goldsmiths Prize 2014, and the Saltire Society Literary Book of the Year Award.

This book is wildly inventive as it mimics the form of a fresco, in which layers are built upon each other. Rather, I should say books — Ali Smith’s latest incarnation is divided evenly in two halves, with different stories that can be read in either order. Really, choose whichever one you want— half of the printed books alternate which section comes first (each is preceded by the heading one and a picture of a camera, and one with a picture of eyes).

One book follows George (short for Georgia) in the months after her brilliant mother has suddenly died. She copes with the loss in alternating healthy and unhealthy ways. The other book is about a Renaissance painter Francesco, whose secret is that he was born a girl but lives with a male identity to pursue his artistic gift. Both books can stand alone, but overlaid as they are, they inform each other and cross paths in surprising ways (I won’t spoil them!). Francesco and George’s stories explore themes of loss, art, what it means to see, sex and gender, and disguise. The narrative voice makes the double-take cohesive, as both are lyrical and fresh: there are no quotation marks, and so the close third person voice often intrudes on the dialogue to correct, reassert, and sometimes to let us have it be both.

This book is the breeziest of the December lot. Addie, an 85-year-old woman reflects on her life, through the conceit of an interview with her granddaughter. She must answer the question, How did you get to be the woman you are today? It takes her back to the slums of a childhood in a Boston tenement. As the youngest daughter of immigrant Jewish parents, Addie had to fight to make the most of her life: attending typing school, a Shakespeare class, running away for a week long retreat with other likeminded girls — all the while her mother telling her that she wasn’t a good girl for being so independent and American. Addie’s romantic misadventures, small victories, and tragedies (you’ll never be so afraid of catching the flu as you are while reading this) are moving, without weighing one down too much. The tone is light, as old memories often are, without the immediacy of fresh pain, and the narrative benefits from the backward glance.

It’s wonderful to see Addie’s ideas about feminism and love evolve over the years, plus how she managed to carry on after enduring so much loss. I'm telling you: the early 20th century does not seem like a healthy time to be alive. Addie reminds her granddaughter that things keep getting better, and not to let anyone a convince her to buy into the myth of the “good old days.”

6. VANESSA AND HER SISTER BY PRIYA PARMAR (BALLANTINE; DEC 30)

Virginia Woolf is a perennial figure of fascination, no matter how many years have passed since her death. Priya Parmar imagines the lives of the Stephen siblings (Vanessa, the older sister, and Virginia, before her marriage to Leonard Woolf) and their lives at the center of the bohemian clique called the Bloomsbury Group, in 1905 London. Vanessa was a painter, and in this story she keeps a diary, hidden from her sister, who cared deeply about maintaining their separate roles: Nessa the painter and Ginia the writer.

The prose is straightforward and accessible, making this a quick read about a famously complex and wild writer. Vanessa and Her Sister provides a fascinating take on this literary family, and the affection and exasperation Virginia’s sister might have felt living with a genius, who was prone to fits of madness. If you’re at all interested in Virginia Woolf, or just a fan of a good piece of historical fiction, in the vein of The Paris Wife, this book's the one for you.