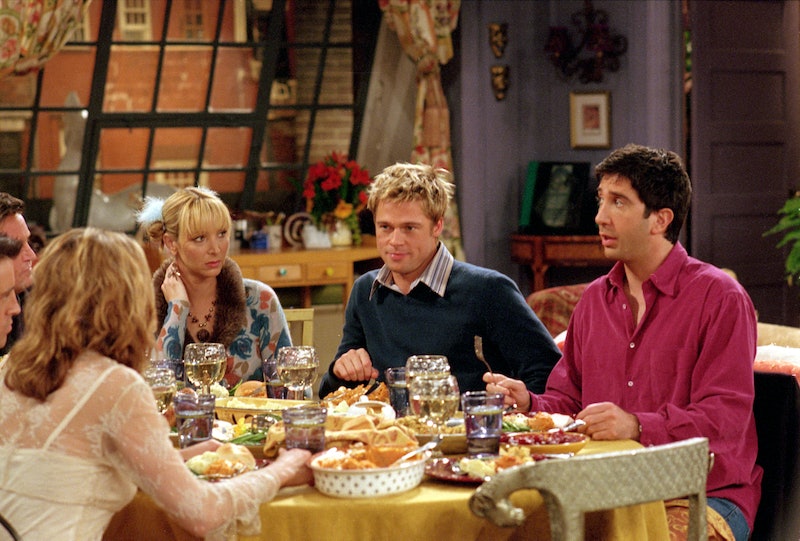 Were you planning on attending your high school reunion right before Thanksgiving? No? Well, too bad. Because if you're heading to your hometown this Turkey Day, you're bound to run into your former classmates, who are also returning home for the holiday, or who never left. This is going to be awkward. Just start mentally preparing yourself now.

I mean, I don't know. Maybe you're still on good terms with everyone you spent your delicate teen years with. Maybe high school was a spectacular, magical time for you, free of bullies and acne, and you look back on your fashion choices with zero regrets. If that's the case, then congrats, because I think you're probably the only one on the planet who can say that. Most of us had a pretty hard go of it, and would very much like to forget and move on. Which is what makes these unplanned, mini high school reunions so strange. You're building your own life somewhere else — in college or as a full-blown grown-up — and you come face-to-face with people who knew the old you and all of your scandalous 16-year-old secrets. They don't really know the new you, and most of your conversations will be based on tired inside jokes and memorable nights involving Mike's Hard Lemonade. But it'll be less weird if you have an idea of what to expect. So here are the kinds of high school peeps you'll run into when you head home this Thanksgiving.

This run-in could be a nice little dose of nostalgia, or it could be absolutely horrible, depending on how you currently feel about the person. If you're still in love with them and they have moved on, then ugh, I feel you, darlin'. Just hold your head high, remain pleasant (especially if they've brought a date home with them), and wish them well. If it's meant to be, then you'll run into them again later in life when the timing is right, and if not, then you'll find someone better. I promise.

There was always that guy/girl who seemed to find you in the right place and at the right time for a buzzed and sloppy make-out sesh. It was never anything more than that, but it sure was fun. Maybe it could be fun again? Hmm....

Ah, the person whom you fantasized about but never dated. Are they still a total dreamboat? Did they go on to crush it in college and land a kick-ass job right after graduation? Does it really matter? No, because you were awesome then, and are definitely awesome now, and if they don't see that during this Thanksgiving break, then it's time to toss those fantasies in the trash.

Don't stress about this one. It is ALWAYS fun to see where the most popular girl in school has ended up. Did she peak too early? Or is she still calling all the shots in life? Most of the time, if the Queen Bee was a total B, then she tends to crash and burn right after graduation because the universe doesn't care about superlatives or who was crowned prom queen or who dated the star QB. None of that matters beyond age 18, so if she's unable to keep an open mind and treat other humans humanely, then she is going nowhere, fast. Trust.

5. Your old bestie whom you haven't seen in forever

You two have grown up and grown apart, and you know what? That's totally okay. It happens. But you can use this time to catch up and reminisce and get to know the adult version of your childhood buddy.

You might not remember how this person first became your rival, but it doesn't matter because as soon as you see him/her, the hate rises up from the depths of your soul and practically shoots from your extremities. Unless you really want to embrace the vibe of Thanksgiving and forgive them, just keep your distance.

7. Your ex-friend whom you've finally forgiven

You're allowed to get mad over a million little nothings in high school because that's really what high school is about — feeling all the feels. Now that you're older and don't have time for nonsense, maybe that friend whom you harshly broke up with should be forgiven. Go on, go buy her some chicken tenders and make nice.

8. Your classmate who had the weird and unfortunate nickname they couldn't shake

First of all, be thankful this wasn't you. Rumors are nasty, and once you've been given a rumor, it kind of becomes your legacy. You are stuck with it until you receive your diploma. And there's always one person who not only gets tied to a rumor, but a very weird, unforgettable rumor that often results in an unfortunate nickname. If you see this person, do them a favor and don't mention it. They've probably enjoyed their time away, being addressed by their given name as opposed to whatever horrible name they were called back then.

9. Your high school's "geek" who is now cooler than everyone else because, DUH

Anyone who had a strong interest in something that wasn't widely accepted as cool at the time was tossed into the "geek" category. Is this still a thing? Or are we now starting to realize that these people are the brilliant ones who will inevitably rule the world, and maybe the kids who think bullying is "cool" are the ones who shouldn't be rewarded? Shake this geek's hand, buy them a beer, and ask about all the cool stuff they're working on now.

More like this
All The Sneaky Lindsay Lohan Movie Easter Eggs In Her New Ad, Explained
By Stephanie Topacio Long
'Mean Girls' ​​Daniel Franzese Spoke Candidly About Conversion Therapy
By Rachel Mantock
American Girl Doll Memes Are Going Viral On Instagram & Tiktok
By Emma Carey
Drake’s Surprise Performance With The Backstreet Boys Was Fans’ Fire
By Stephanie Topacio Long
Get Even More From Bustle — Sign Up For The Newsletter