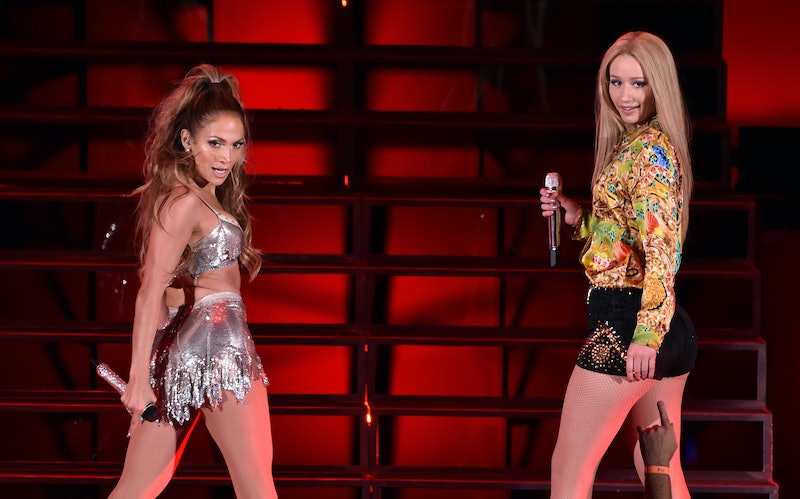 Yeah, that was just as sexy and crazy as we all hoped. The AMAs featured the debut of Jennifer Lopez and Iggy Azalea's new hit single "Booty" for the first time, and it did not disappoint at all. In fact, it showed everyone that not only are Jennifer Lopez and Iggy Azalea's booties fabulous, J Lo is just as show-stopping a performer as she's ever been in her life. Earlier in the week, Iggy and J Lo scared the entire AMA censor board with threats of their "Booty" performance, which I found to be hilarious because this is the same awards ceremony that broadcast Katy Perry in Geisha attire. So cultural appropriation is fine, but apparently singing about your butt isn't? That's a lie and we all know it. Nicki Minaj has taught us that isn't true.

But after watching the "Booty" performance I knew for sure that the AMA censors were nervous for nothing as J Lo and Iggy brought the sultriness and the energy that we all were expecting but somehow still kept it classy and so cool rather than trashy. In fact, I actually kind of wished the performance could continue because it was just so much fun and, in many ways, reminded me of throwback Jennifer Lopez.

The performance began in a very Beyonce-like way: With J Lo in silhouette and doing suggestive poses much like Beyonce in the "Partition" video and many of her "Partition" performances. From there we saw Lopez and Iggy commanding the audience from start to finish with not just their booties but also their onscreen badassery.

By the time we got to the Jennifer Lopez dance break, I was already totally invested in the song. Lopez showed more energy in her dance section than I have in any and all of my workout attempts, which makes me think that I really need to step up my exercise game and J Lo needs to calm herself down so she doesn't seem so super human. But despite my feelings of inadequacy, I was overcome with joy during the dance break (and the performance in general of course) as it almost reminded me of a Gloria Estefan song with a J Lo twist, which is how I always felt her old music used to sound.

J Lo may have had some musical setbacks in the past, but she's really bringing it these days and getting the help of the incredible Iggy Azalea is the smartest way to get back on top of the charts, as is reminding everyone that you had a booty long before Nicki Minaj stepped on the scene. We may have a Jennifer Lopez comeback on our hands folks, and it's going to be so much fun to watch.

More like this
8 Celebrity Couples That Made Their Romantic Debut At Wimbledon
By Sophie McEvoy
Freddie Flintoff’s Wife Has The Cutest Nickname For The Famous Cricketer
By Frances Stewart
Watch Emma Raducanu’s Incredible Response To Her Early Wimbledon Exit
By El Hunt
Rihanna Is America's Youngest Self-Made Woman Billionaire, According To 'Forbes'
By Hugh McIntyre
Get Even More From Bustle — Sign Up For The Newsletter