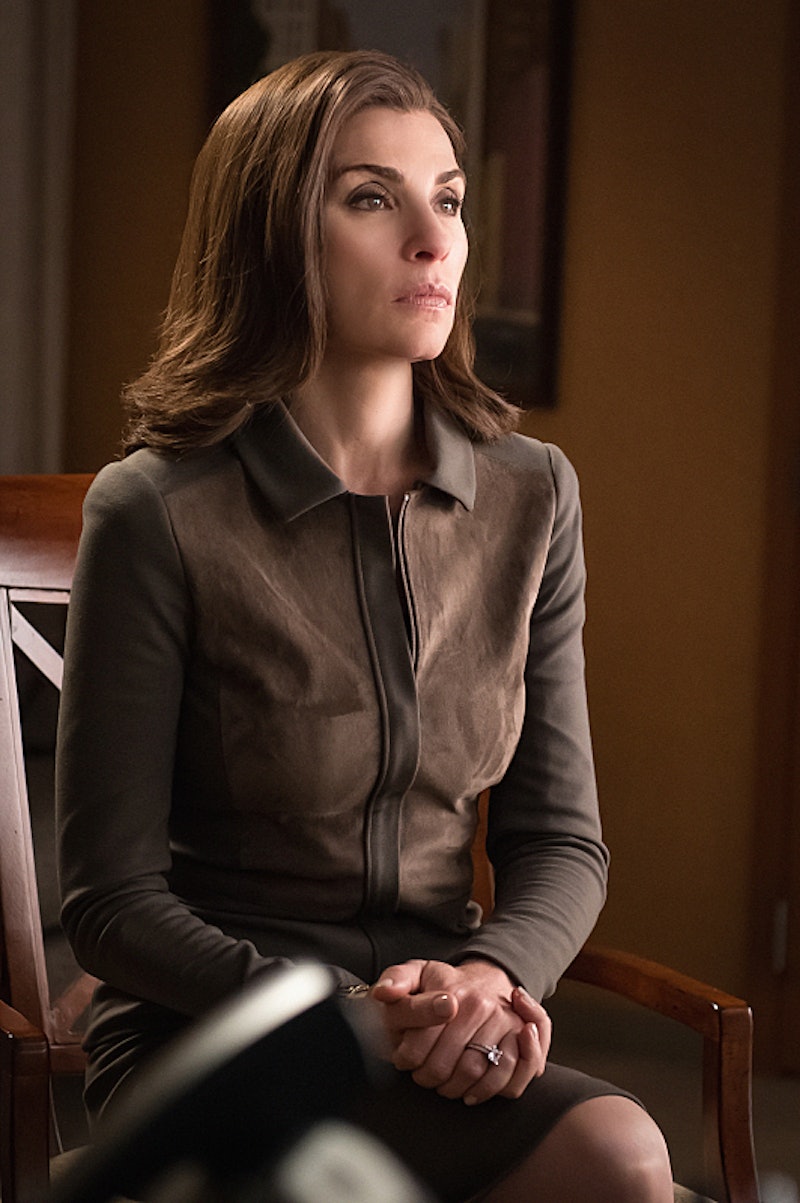 On Sunday night's new episode of The Good Wife , "The Trial," Alicia Florrick threatened to stab her daughter's gym teacher as a joke. Unfortunately, nothing about the bizarre plot line made any sense. Seriously. "The Trial" was written by series creators Michelle and Robert King — which is normally a good thing — but I think that they really missed the mark this time around. So, apparently, Grace's gym teacher was pressuring her to run during class, even though she was sick. Grace asked her mom to write her a letter that would get her out of class. As a joke, Alicia wrote a note that said that if the gym teacher continued to pressure Grace to run, she would come to the school, stab him in the lower intestines, and leave him to bleed out and die.

Grace then took the horrifying note and showed it to her civics teacher, who in turn gave it to the principal. Awesome. Next thing you know, Alicia's strange joke is all over the Internet, threatening to derail her campaign for state's attorney. Alicia explained to Eli and her campaign manager, Johnny, that she was just kidding around (she was quoting one of her favorite television shows, Darkness at Noon, of course). She supposedly wrote the note in order to make Grace laugh. I see.

First of all, the Alicia we've all come to know and love over the course of six seasons is not an idiot, so I don't think that she would've made a joke like this in writing. She's a lawyer (obviously), so she would've known that it could come back to bite her. Second of all, she's running for political office, so she also would've known that everything she does right now is under a microscope, and I just don't think that she would've taken the risk. Even if she did write the note during a momentary lapse of judgement or something, wouldn't she have at least crumpled it up and thrown it out after it had served its purpose and written Grace a new note? A non-insane one? I think so.

Second of all, why would Grace bring the note to school and show it to one of her teachers?? She may be a little naive at times, but she's also not an idiot. Why would she expose her mom as the kind of person who jokes around about murdering people? Grace has to understand that part of the state's attorney's job is to prosecute murderers... right? I just can't wrap my head around any of this.

"The Trial" was an over-stuffed episode — it could've lost the note story line altogether and not suffered. In fact, in my opinion, it would've been a much stronger installment without it. The Good Wife reportedly returns with new episodes on Jan. 4.