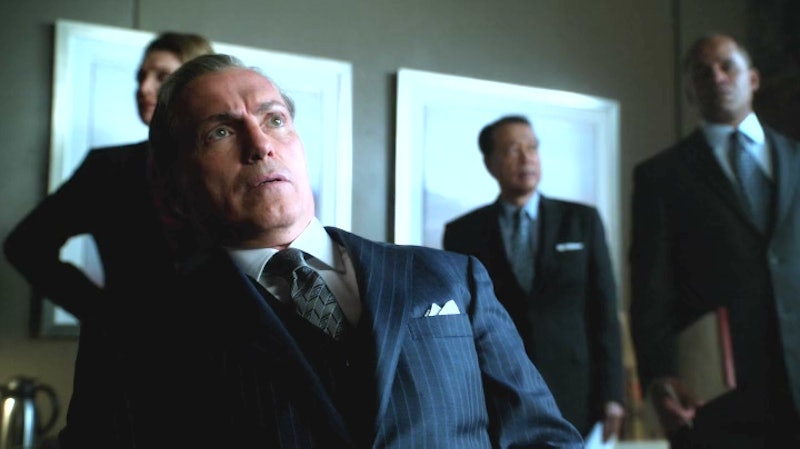 With all the excitement of Harvey Dent's introduction in last week's episode of Gotham, also appropriately titled "Harvey Dent," some people may have missed a few easter eggs and plot points from the other storylines that didn't feature Gotham City's newest District Attorney. I know I probably did. Because Monday night's newest episode, which also happens to be Gotham 's midseason finale, "LoveCraft," focuses on Selina Kyle running away from professional assassins while Jim Gordon ends up working at Arkham Asylum. I can only imagine from "Harvey Dent" that when Dent put the screws to billionaire Dick Lovecraft about Martha and Thomas Wayne's murder, Lovecraft got scared and is now determined to take out Dent's only witness to the crime and the only person who, according to Dent, could potentially tie him to the murders. But before we hypothesize more about the midseason finale, it's important to answer one big question: Who is Dick Lovecraft? Is he a character from the DC comics?

The answer is a bit more complicated. Unfortunately, Lovecraft has not been lifted directly from the pages of any of the major Batman-related comics and he also doesn't seem to be an amalgamation of a few different Batman villains, at least not based on the few minutes of screen time he received in "Harvey Dent." There are, however, references to his name in Batman lore, specifically his last name. For example, there is a Doctor Lovecraft that fights against the Justice League with a group of villains. But that's most likely not the Lovecraft Gotham is hoping to reference here.

In fact, the show is probably referring to the iconic author H.P. Lovecraft, who wrote such classic horror and science fiction works like The Shadow Out of Time, "The Call of the Cthulhu," and many more. Lovecraft wrote about a fictional city in Massachusetts named Arkham in his works. In the 1933 story "The Thing On The Doorstep," Lovecraft described the city as "ancient, mouldering, and subtly fearsome town...witch-cursed, legend-haunted Arkham, whose huddled, sagging gambrel roofs and crumbling Georgian balustrades brood out over the centuries." He also mentions the existence of an Arkham Historical Society and the Arkham Sanitarium.

DC Comics was inspired by the story and created the Elizabeth Arkham Asylum for the Criminally Insane for the Batman universe. So it's likely that Gotham took the reference one step further by adding a character with the last name of Lovecraft to honor the legendary author.

So what does that mean for Lovecraft in the series? This will probably not affect his time on the show, but it could foreshadow where the billionaire could end up if he continues his evil ways and eventually gets caught by Dent and/or Gordon. As Dent said himself, he's clearly trying to nail Lovecraft on multiple charges of wrongdoings for years and yet nothing has stuck so far. Could he somehow connect Lovecraft to the Waynes' murders even if he didn't have anything to do with it? Is Dent that determined to put Lovecraft away?

Considering what Dent becomes later down the line in the Batman mythos, it's highly likely that he channels a little Two-Face action to put away the bad guys. He's already let out some rage on Lovecraft that showed his future. That won't be the last time we see Two-Face coming out of the shadows. Lovecraft better watch his back.