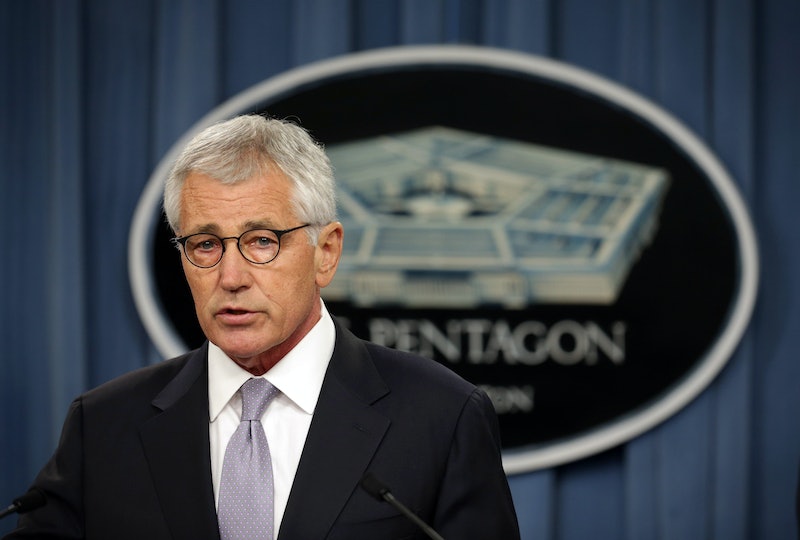 The Department of Defense is losing its top player: Defense Secretary Chuck Hagel is resigning after less than two years in the storied position. According to The New York Times, Hagel's departure comes at the request of President Obama, following a series of escalating global crises with little to no resolutions. President Obama, who reportedly asked Hagel to resign last Friday, is expected to make the sudden announcement at the White House on Monday.

Although Obama is removing Hagel from his cabinet, an unnamed administration official made it clear to The Times that Hagel was not fired. In fact, the departure seemed to be the result of a consensus between Hagel and Obama, the latter of whom is looking to refocus the Defense Department as it struggles to seize control of tumult in Iraq and Syria, and at the Ukrainian-Russian border. However, The Times reports that aids to Hagel have said recently that the defense secretary wanted to serve a full four years in the position.

The Associated Press added that Hagel, after weeks of discussion, submitted his resignation letter to the White House on Monday morning. Obama accepted it.

Both the Department of Defense and the White House have yet to publicly confirm Hagel's resignation. However, an unnamed defense official has confirmed the report to CBS News, echoing The New York Times by telling national security correspondent David Martin that it was a "mutual decision." Martin reported that Hagel was "fed up" with some of the management from the White House.

Hagel, a Vietnam War veteran, is the only Republican currently serving in Obama's cabinet. Prior to assuming the defense secretary position in 2013, Hagel served as a U.S. Senator, representing Nebraska, between 1997 and 2009. Although Hagel voted in favor of the war in Iraq in 2002, he was later very critical of the war. Even his statement on the Iraq resolution, delivered prior to the vote in 2002, was equivocal, with Hagel warning Congress of the inevitable "implications and consequences of our actions:"

How many of us really know and understand much about Iraq, the country, the history, the people, the role in the Arab world? I approach the issue of post-Saddam Iraq and the future of democracy and stability in the Middle East with more caution, realism, and a bit more humility. While the people of the Arab world need no education from America about Saddam's record of deceit, aggression, and brutality, and while many of them may respect and desire the freedoms the American model offers, imposing democracy through force in Iraq is a roll of the dice. A democratic effort cannot be maintained without building durable Iraqi political institutions and developing a regional and international commitment to Iraq's reconstruction. No small task. To succeed, our commitment must extend beyond the day after to the months and years after Saddam is gone. The American people must be told of this long-term commitment, risk, and costs of this undertaking.

Although he identifies as a Republican, Hagel's nomination as defense secretary was fiercely opposed by Republican Senators — a bitter holdover from his pragmatic, party-breaking stances on the Iraq war in 2002 and beyond. He may have voted for the war, but Hagel was never as hawkish as his colleagues in the post-9/11 Senate, and his active opposition to increasing troops on the ground in Iraq and Afghanistan fractured his relationship with his party. In 2013, Hagel was the only Cabinet nominee in U.S. history to have his nomination filibustered — by Republican Senators, of course.