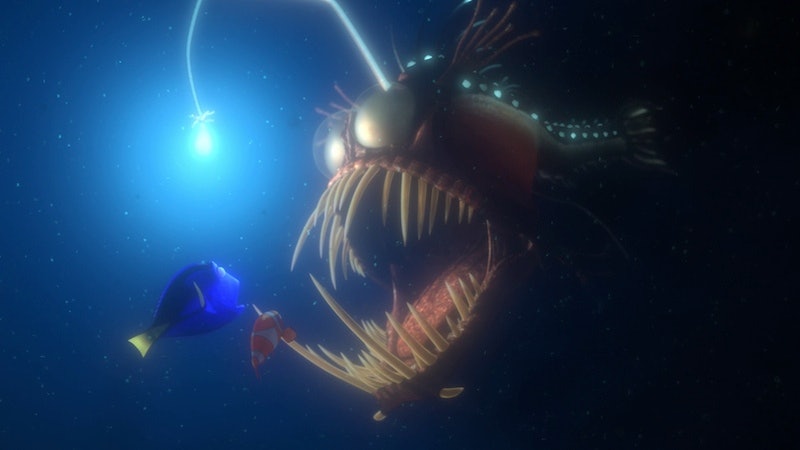 If ever a fish were aptly named, it would be the Black Sea Devil. If you figured that going back in the water was a-OK after Jaws, if Piranha didn't convince you to stay on land at whatever cost, this video of a black seadevil — whoever named this thing probably shoved those last words together in the hope their terror wouldn't be quite as obvious — will put an end to your frolicking. Hey, remember that scene in Finding Nemo where Nemo and Dory were very nearly eaten by that teethy, spiky, glowing monster? Oh, yeah. Meet the black seadevil.

We've got good news and bad news. The good news is that the black seadevil lives in the deepest, blackest part of the ocean, where humans aren't likely to go (unless you're James Cameron) and thus will continue its reign of terror far, far away from you. The bad news is that if you watch this video and squint a bit, it might as well be thrashing around right in front of you. The Monterey Bay Aquarium Research Institute sent a remote-operated camera three miles underwater, and now we have... this. Warning: it's called a black sea devil for a reason.

A bit of trivia about this little guy: The black seadevil is part of the anglerfish family, and no doubt the shunned, black-sheep part. As we all learned in that nightmarish Finding Nemo scene, it has a long, illuminated "fishing pole" — that's the official term — dangling from its head, which is used to lure prey, and gigantic spiky teeth for super-efficient devouring of said prey. (Fun fact: Only the female black seadevil has the teeth required for said reign of terror, meaning the males mostly float around, shrugging.) This thing can eat prey larger than itself, and it's never been caught on video before. Thank you, science.

Oh, and just in case that Finding Nemo scene didn't haunt your nightmares the first time — it's just a movie, they said, fish don't talk and devils don't stalk the deepest seas, they said — here's the black seadevil's cameo.