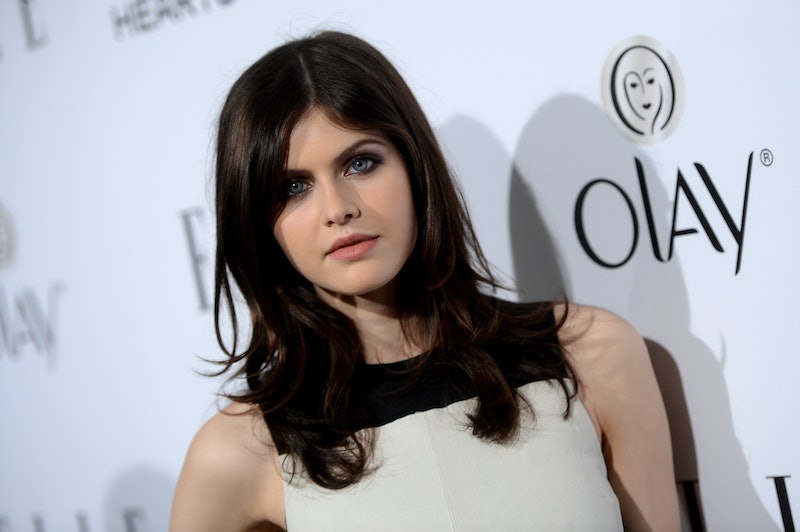 Doing her part to contribute to the "Famous Hotties Are Real People Too" file, actress/model Alexandra Daddario took to Twitter to show the difference between what she looks like in a sexy GQ photo shoot and what she looks like as an adorable doofus in real life. I could, of course, write something here about how photos like this do a great service to non-model women in that they help illustrate that the seemingly unattainable images of women in magazines are largely products of makeup, lighting, and Photoshop. I could reinforce the oft-conveyed truth that the women whose depictions can often make our own weird, flawed bodies feel not good enough are, in reality, not that far off from us in terms of being gloriously weird and wonderfully flawed themselves. I could write about all of that, but you already know it.

So I want to talk for a minute, not about the need for models to prove to us that we shouldn't feel bad about ourselves compared to them, but about how valuable it is that photos like this one help us remember that models themselves are actual, vulnerable, living, breathing human beings. Because it can be easy to forget and to treat them as less than that.

I recall an episode of Sex and the City (because, let's be honest, I'm a 28-year-old woman and every word of every episode is permanently burned into my helpless brain) when Carrie laments the fact that New York City is the one place in the world where "normal" women have to deal with the fact that they are swimming in the same dating pool at actual models. I feel like if Carrie made this observation in 2014, a few things would've been different: She would've made some eye roll-inducing Tinder pun ("If only models have a chance at getting swiped right, how am I not supposed to feel like everything I do is wrong?") and she would've been criticized for "othering" models who, after all, are people, too. I'm all for it.

Body positivity doesn't mean having a free pass to criticize certain bodies just because they are more widely celebrated by conventional beauty standards. It doesn't mean defending the legitimacy of only bodies that are historically considered less beautiful or valuable, and thus (by our admittedly logical reasoning) are in greater need of defense. Body positivity means creating a mind-set of acceptance, appreciation, and respect for all bodies—even the ones that places like GQ call "hot." A stamp of approval from GQ does not equal an impenetrable force field around those women through which our unkind words can't be felt.

All of that might seem like a somewhat unrelated tangent, but it's not. Because that's the true benefit of instances of "beautiful" people posting "real" photos of themselves: They remind us that there are actual humans who scrub off that makeup, and go home and roll around on the floor with their dogs, so we should all stop being afraid of the ways our bodies look different and just be cool with each other.

More like this
Olivia Munn Got Real About How Her Body Hasn’t “Snapped Back” Post-Pregnancy
By Stephanie Topacio Long
At 28, Emma Thompson Was Already A Star — But Unhappy In Love, Actually
By Olivia-Anne Cleary
34 Quotes That'll Inspire You On Juneteenth & Beyond
By Syeda Khaula Saad and Siena Gagliano
Lizzo Changed The Lyrics Of “Grrrls” Amid Backlash
By Maxine Harrison
Get Even More From Bustle — Sign Up For The Newsletter