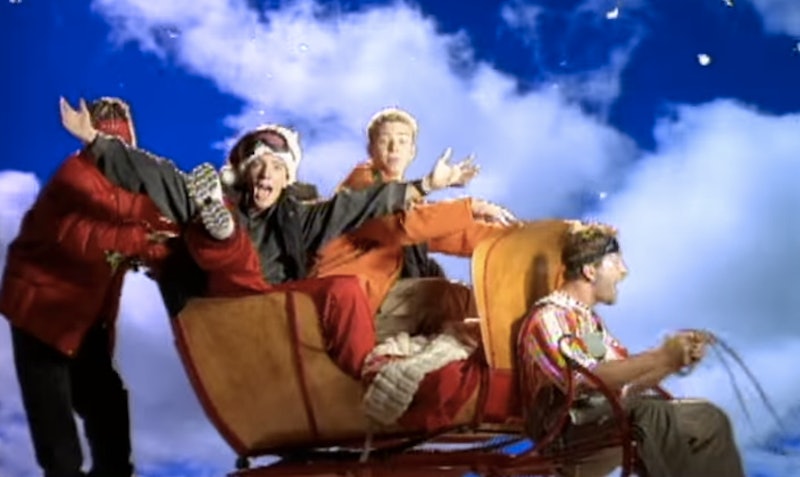 There's definitely a spectrum of quality within the tremendous pantheon of pop Christmas albums. There are $2.99 Best Buy bin CDs like Twisted sister's A Twisted Christmas. There are quirky get-it-for-your-boyfriend-on vinyl delights like She & Him's A She and Him Christmas. And then there are the oft forgotten but totally important collectives, like the indisputable 1998 NSync masterpiece, Home For Christmas .

Of course if you were a tween of the late '90s (a time in which terms like "tween" didn't exist) you had this CD. I mean, I, Little Miss Gloom and Doom, had this CD. Truth be told, I was more of a Backstreet Boy girl myself, but they really never maximized the whole Christmas angle. Slackers.

Sadly, it's been a while since I've listened to Nsync's album. See, when I was 13 and entering my goth phase (which I am still in right now) I decided, at my parents' Christmas party no less, that I was going to purge all of the pop CDs from my collection. Everything from Britney Spears to Aaron Carter was given out to daughters of family friends, so I could make room for all that Evanescence. Needless to say it would be another year before my taste in music shaped up, but that's beside the point. My point is, that Home For Christmas CD was distributed with the rest, gone forever.

Until now. Luckily a little thing called the Internet allowed me to revisit all the magical tracks off this timeless gem. Subsequently, here's a modern ranking of all the songs off "Home For Christmas."

Probably the most boring, underwhelming track off the album. Even the title sucks. You GUESS it's Christmas time?? What, did all the multicolor lights and Santa Claus paraphernalia tip you off?

They're more certain that it's Christmas this time around, but it still puts me to sleep.

I feel like this is the kind of song I could dance to, yet I can't place what kind of dance would actually work/not look tremendously stupid. It's a weird tempo, it doesn't pump me up for the season, ultimately the whole thing falls flat.

11. "I Never Knew the Meaning of Christmas"

It's a sultry-sounding slow jam with questionable lyrics. I don't know, maybe it's because I'm older now, but the line "it's beautiful under my tree" sounds like bad innuendo for... something. Also they dare to reference Nat King Cole, the master of the Christmas carol. How dare they?

9. "All I Want Is You This Christmas"

Aggressively fine. There's a saxophone. Not to be confused with the similar "All I Want For Christmas Is You" by Mariah Carey, which you've no doubt already heard, like, a million times in Walmart since Halloween ended.

To clarify for all you Christmas Carol novices, this is the one that starts with "chestnuts roasting on an open fire." A great song, not the best cover, it's ultimately redeemed with all the harmonizing in the background.

Again, it's all mixing in some sweet harmonies into a Christmas classic, which makes this altogether Not Bad. I did, however, crack up at the mental image of them in the studio singing this.

Like many of the songs, it doesn't particularly get me pumped up for the season but it's really good background music. If you have to work retail during the holidays, this is the kind of non-obstructive song you want playing as you try to peddle moderately-priced lingerie to shoppers.

5. "Love's In Our Hearts On Christmas Day"

The song is a bit slow for my liking, but it's also really pretty.

Adorable. I just want to go outside with Justin Timberlake and the boys and have playful/sexy snowball fights. ALSO, ironically the only one not available on YouTube. Go figure.

Respect: this is an entirely a cappella cover, and it's kind of beautiful in its simplicity. The Barden Bellas would be proud.

Probably the most sincere of all the Yuletide proclamations of love, and confession: It may make me swoon just a bit. Like before, they weave in some other lines from carol classics ("Jingle Bells," et al) and here it works best. Bravo, lads, bravo.