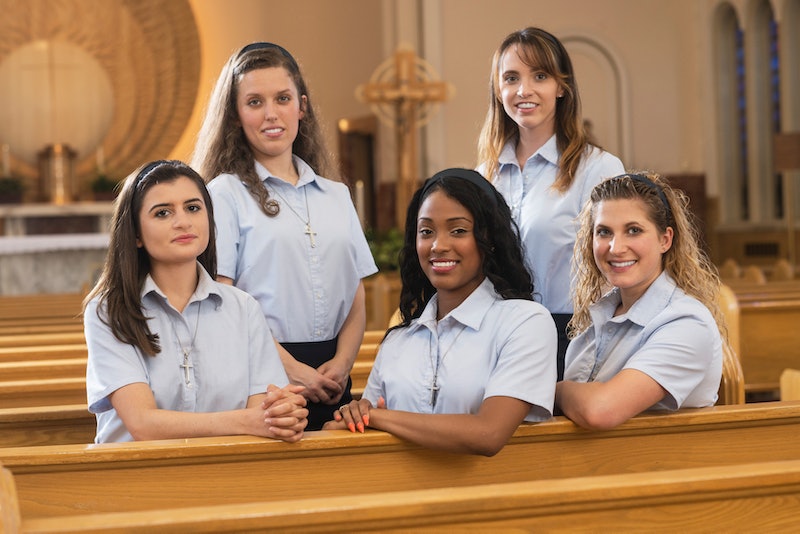 Nuns are kind of having a moment right now, from last year's Sound of Music Live to the black-and-white trend that lasted all summer. Now Lifetime is going to pull its audience inside a real convent in the new series The Sisterhood: Becoming Nuns, exposing just what it's like to join a convent and start the journey toward becoming a Catholic nun. So, how do you become a nun? Well, even within Catholicism, there are a lot of different orders of nuns, and each one has a slightly different way of doing things, or slightly different details, like a dress code (not all nuns wear habits anymore), a type of social work (like teaching or taking care of the sick) that they do, and different lengths of time they require before accepting new sisters.

But while each of the cast members from The Sisterhood may end up either committing or reconsidering their desire to be a nun, most interested women go through very similar journeys to get there. And, of course, before even starting on the steps of becoming a nun, the cast of The Sisterhood joined a local church, gained mentorship from current nuns, and took time to carefully consider through prayer if this is the best course of action. After that, there are a few qualifications, a few recommendations, and a few steps to keep in mind.

You Should Be Catholic

While there are multiple forms of religious service, The Sisterhood is specifically about Catholic nuns. You have to be baptized and confirmed by the Catholic Church in order to start the process of becoming a nun.

You Have to Meet Certain Qualifications

The church has a few requirements that all women who want to be nuns have to abide by. They have to be at least 18, but generally not much older than 40-50 — though that's gotten much more flexible in later years. And you cannot currently be legally married, although you can be a widow or have your marriage annulled by the church.

While all sisters/nuns don't live cloistered away from the rest of the world, they do often live in convents. After deciding that you want to become a nun, you have to move into one of these communities for a period of "candidacy" as a "novitiate", which can last up to two years. During that time, you live among other nuns and basically test-drive what your life would be like alongside them. This is the stage that The Sisterhood cast is beginning — "discernment," in which they assess whether they truly want to live a religious life.

After enough time has passed, a potential nun can go through a rite where they surrender their life to the religious order and take vows that compel them to remain unmarried, devote their work to charity, and give up most of their material goods. Then and only then does that novitiate become a full-fledged sister. Which girls from The Sisterhood will actually get that far? We'll just have to wait and see.