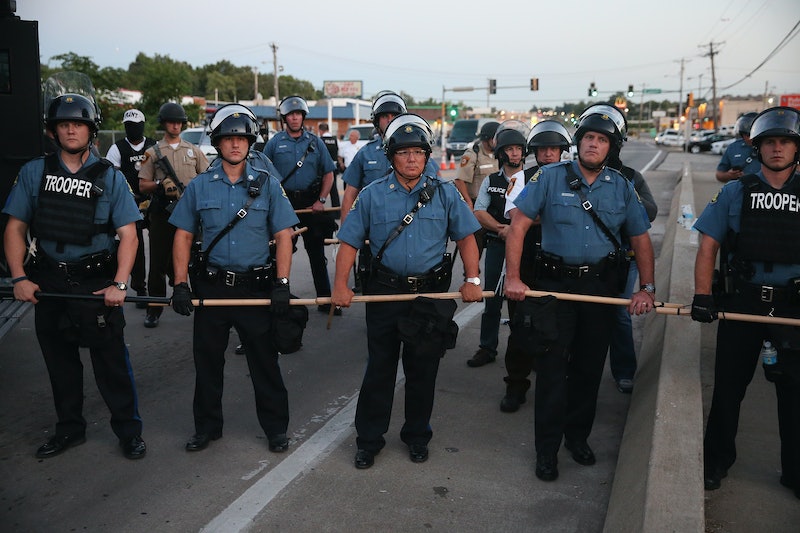 On Monday in Ferguson, St. Louis, after-school activities were canceled and stores shuttered in preparation for a grand jury's decision whether to indict Darren Wilson. On Aug. 9 this year, Wilson fatally shot the 18-year-old at least six times, according to the official autopsy, and less than two weeks later a grand jury was considering whether to indict Wilson on charges ranging from involuntary manslaughter to first-degree murder. UPDATE: The jury has until January, but on Monday it was announced it had come to a decision: Wilson was not indicted.

The decision was announced by St. Louis prosecuting attorney Bob McCulloch, who not only delayed announcing that Wilson would walk free during a meandering speech, but also admonished social media for its "speculation" surrounding Brown's case. According to McCulloch, misinformation spread on social media and 24-hour news cycle thanks to its "insatiable appetite for something and anything to talk about," a direct challenge against those who praised Twitter and other outlets for demanding justice for Brown. An interesting approach, considering McCulloch started on a much more poignant note, paying respects to Brown's family: "I know the pain that accompanies such a loss knows no bounds."

Prosecutors told the press and Michael Brown's family Monday that they'd announce the decision at some point Monday evening, though reports of the exact time varied at first. ABC declared it would occur at 8 p.m. ET, and USA Today, quoting an Al Sharpton press release, suggested it would be 8 p.m. CT. This was later confirmed to be 9 p.m. ET. Bracing itself for protests that lasted, with varying degrees of intensity, for months after Brown was shot, Ferguson-area schools were preemptively shut Tuesday.

Michael Brown's family (who called for a moment of silence for four-and-a-half-minutes following the grand jury announcement), state and city officials, and Gov. Jay Nixon preemptively called for peace — but a week ago, Nixon activated the National Guard to keep peace in the town, suggesting that the governor didn't have much in the way of hope that his calls for peace would be met.

At 6.30 p.m. ET, Mayor Francis Slay and Gov. Jay Nixon held a press conference to urge non-violent protest, whatever the outcome. "We will protect your right to peacefully assemble and speak your mind," said Slay.

"I'd like to reiterate my call for peace, respect and restraint," Nixon said, adding that he could understand why Ferguson residents were "on edge."

The St. Louis Police Department also issued a statement prior to the announcement, reiterating that its "primary responsibility is to protect both life and property for our citizens." The statement also read that the police department had prepared for "the release of the grand jury decision. Our commanders have been meeting with local community officials and protest leaders to help ensure preservation of life, property, and that all citizens’ enjoy the freedom to express their constitutional rights."

According to The New York Times, Wilson had planned for both outcomes — an indictment, or to walk free in a frustrated, furious city that has called for criminal charges to be brought against him for almost four months.