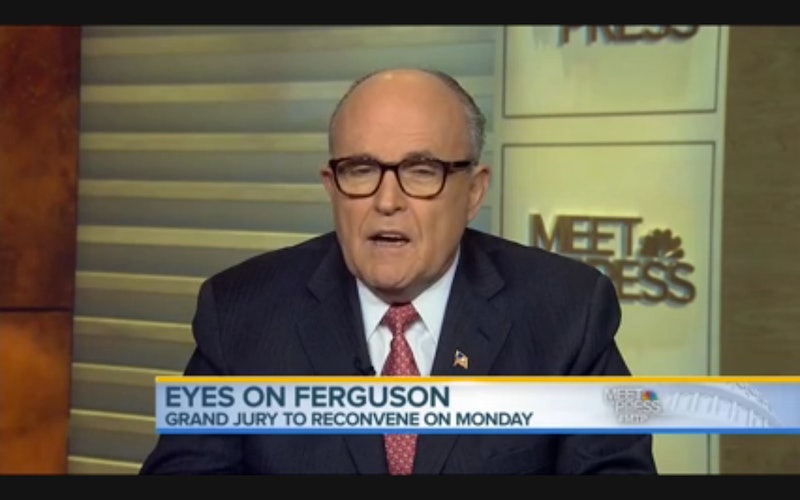 Many people awoke from this past Sunday's morning slumber to a heated interview on NBC's Meet The Press, where Rudy Giuliani argued for white policing in black communities, with Michael Eric Dyson, a professor of sociology at Georgetown University. Dyson, naturally, vehemently disagreed with the former New York City mayor.

In the interview, Giuliani was asked how a force could strive to be racially proportionate to the communities that they police. Giuliani responded by criticizing the media's coverage of the Ferguson protest, and went on to question why people were up in arms about the killing of unarmed teenager Michael Brown by a police officer, but remained silent about the topic of black-on-black crime. The former mayor said:

I find it very disappointing that you're not discussing the fact that 93 percent of blacks in America are killed by other blacks. We're talking about the exception here.

Dyson's reaction was understandably one of outrage — not only highlighting Giuliani's position as an out-of-touch authority figure with a skewed perception of reality, the professor also obliterated Giuliani's argument by pointing out the fact that police officers are agents of the state who have sworn to uphold the law. Dyson noted:

Giuliani continued by asking Dyson why he wasn't protesting "the poor black child that is killed by another black child," going off on a long, rather perplexing diatribe that Dyson repeatedly tried to interject. Ever so horrifically quotable, Giuliani said:

To which a visibly irate Dyson said:

Look at this! This is the defensive mechanism of white supremacy in your mind sir!

The emotional exchange ended with the newscaster cutting them off — after numerous attempts — and highlighting the tension in the subject matter.

Hidden in Giuliani's feeble attempt at making a point for the racial disproportion in policing in the U.S. was also the implication that black-on-black crime was on the rise because it was neither being acknowledged nor addressed. In comparison to the early 1990s, homicide deaths and arrests have dipped by 70 percent among the black youth all across the country, making Giuliani's argument inaccurate and out-of-date.

Giuliani received swift feedback on his views via Twitter, with many accusing the former mayor of being the epitome of an racially prejudiced white man (paraphrasing, of course):

That the former mayor even brought up the topic seems like an effort to change the focus on Ferguson. Whether or not black-on-black crime is rampant is irrelevant to how police officers use their state-granted authority to exercise violence. Police misconduct is an issue separate from black-on-black crime — in fact, the Ferguson police force's excessive reaction to the protests only served to highlight the gravity and magnitude of police violence in the country. Perhaps Giuliani would do well to take a step back and reassess his clearly strongly-held beliefs.