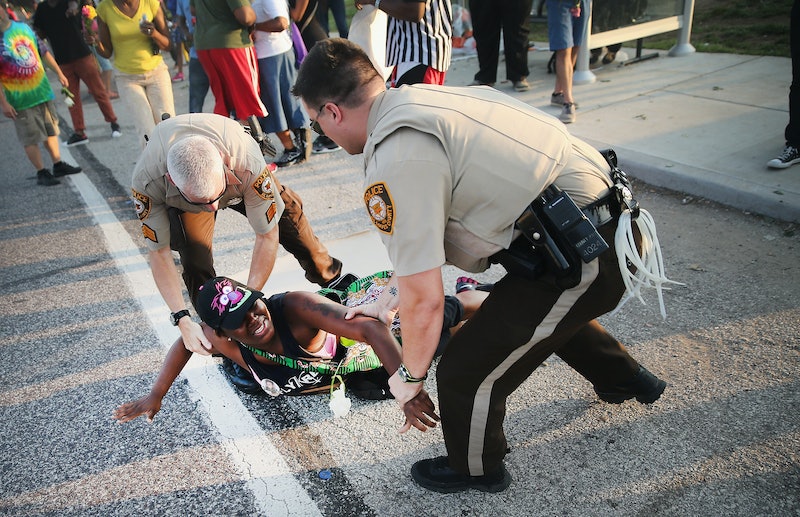 The decision that we've been holding our collective breaths for has been announced — on Monday night, the Ferguson grand jury cleared Darren Wilson of criminal charges. As expected, people are fuming at the Ferguson grand jury's verdict, and the Missouri city — and the nation — braces for more protests in response.

On Aug. 9, Officer Darren Wilson shot and killed 19-year-old Michael Brown, who was unarmed. Brown's death triggered violent protests and a similarly violent police response, and rekindled a conversation about racial profiling and police brutality. The grand jury's decision has been months in the waiting, and on Monday night the prosecutor Robert McCullough delivered a lengthy statement describing the incident in great detail.

He said the grand jury heard over 70 hours of testimony, some of which he said changed as the information given was challenged. In his statement, McCullough noted:

There is no question that officer Wilson was responsible for the shooting death.

The speech was largely reacted to with scorn, as the prosecutor faulted a "24 hours news cycle" and social media for the difficulty in the grand jury reaching a decision.

Once the decision was announced, people were predictably upset, but none quite expressed surprise at the no-indictment vote.

McCullough was also lambasted for the reasoning behind the verdict. While he stated that some eyewitness testimony didn't corroborate with the physical evidence, it seemed that said physical evidence represented was consistently contradictory — leading to questions of how the decision could even be made in that case.

For now, the city is on edge as a crowd rallies around the Ferguson police department, a continuation of months of protests.