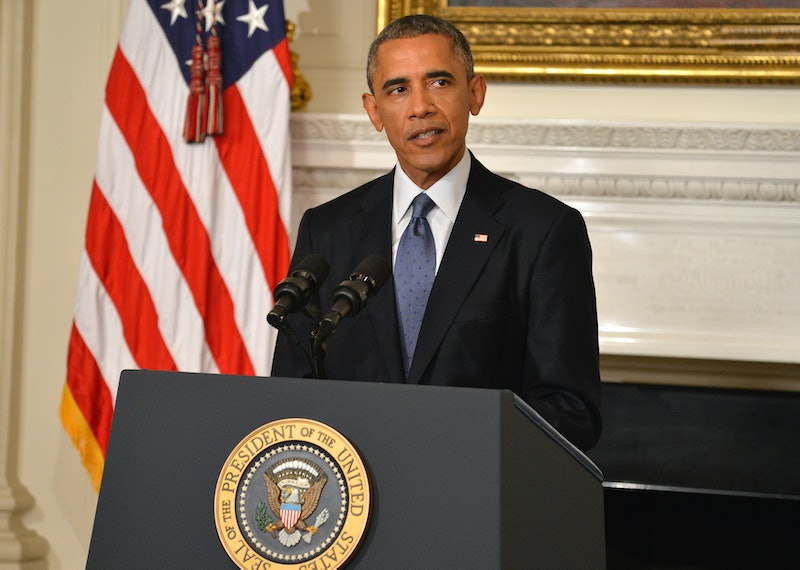 One hour after the Ferguson grand jury's announcement of its no-indictment verdict for Officer Darren Wilson for the death of Michael Brown, President Obama took to the stage shortly after the end of the statement by prosecutor Robert McCullough, delivering a speech that predominantly highlighted the need for a calm and constructive response.

The president opened by stressing the importance of accepting the grand jury's decision, as "a nation built by the rule of law." He reiterated Michael Brown Sr.'s plea for peaceful protests, appealing to protestors to honor Brown's parents' wishes — at the same time cautioning law enforcement around the country to show "care and restraint" in the upcoming days, emphasizing the need to cooperate with, "not against the community."

Obama also acknowledged what he called "a deep distrust" between the law enforcement and minority communities, but said that these communities are exactly the ones that required protection — and in proportionate representation to those they serve.

Nobody needs good policing more than poor communities with higher crime rates. The good news is we know there are things we can do to help... That means working with law enforcement officials to make sure their ranks are representative of the communities they serve.

Most importantly, the president broached the subject of criminal justice reform and advances in race relations — giving the significance of the incident a historical weight of sorts. He said:

This is not just an issue for Ferguson, this is an issue for America. We have made enormous progress in race relations over the course of the past several decades. I've witnessed that in my own life; and to deny that progress, I think, is to deny America's capacity for change.

However, the very real and present issues of police brutality and racial discrimination at the hands of law enforcement were also recognized, although Obama conceded that he doesn't think such cases were the norm, or behavior true for the majority of communities or police officers. He also cautioned that there is "never an excuse for violence."

The president's speech chiefly focused on acknowledging the grievances on both ends of the debate, and urging restraint and peace from both the protestors and law enforcement. In closing, he also reminded the media of its responsibility to highlight the positive approaches and developments to Brown's tragic death. He said,

We need to lift up that kind of constructive dialogue that's taking place.

President Obama didn't respond to whether there will be federal charges.