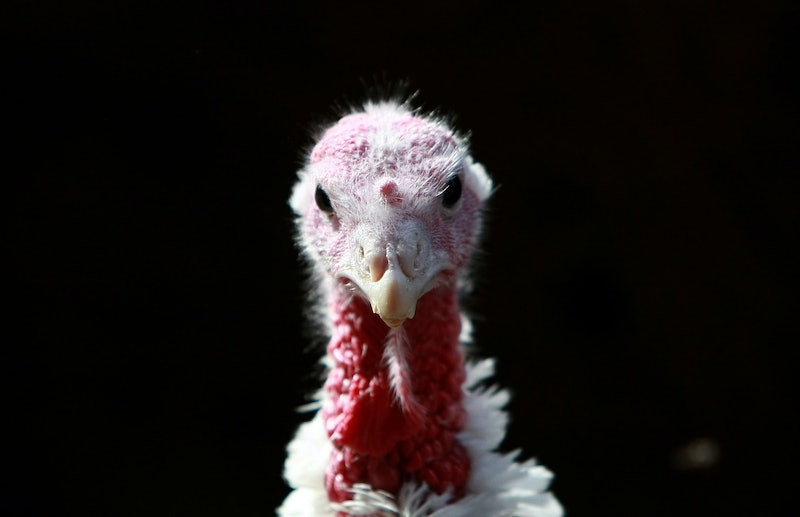 No other city on the planet commands attention and stokes desire quite as well as New York City does. Its inhabitants, a fitful, diverse bunch of people — and quite possibly aliens, because anything goes in NYC — are no strangers to outlandish, hysterical behavior. From that person on the subway screaming at you to the lavish restaurants whose diners are dressed as if they're attending a wedding or your funeral, the city springs surprise upon surprise on its proud, but haggard residents. The city's most absurd holiday season event this year, though, is hands-down the $35,000 Thanksgiving meal for four at Old Homestead in the Meatpacking District.

$35,000; that's $8,750 per head — enough to pay off half a year of student loans, a last-minute plane ticket to and from Timbuktu probably a few times over, months and months of rent, or two (two!) home births. But what is $35,000 in the grand scheme of things for the one percent? Chump change, it seems — two of the three four-person dinners the restaurant is serving has already been scooped up. And anyway, Old Homestead's co-owner Marc Sherry told ABC News that the nine-course meal wasn't about the money (no, of course not) — it's about the ingredients, and giving those who already have it all "the Thanksgiving of a lifetime."

I mean, obviously. You wouldn't expect a meal consisting of organic turkey dribbled in a $1,750 bottle of 1982 Chateau Mouton Rothschild-infused gravy and stuffed with seven pounds of imported Japanese Wagyu filet mignon — "finest beef in the world," said Sherry —, sweet potatoes topped with $1,600 Royal Osetra 000 Caviar, squab stuffed with foie gras, and cranberry orange relish with Gran Marnier cognac liqueur to cost anything less than thousands of dollars, would you?

And if, for some unfathomable reason, the extravagance of your Thanksgiving dinner makes you lose sight of what the celebration really is about, simply saunter over to the grandstand seating — made available especially for your deep pockets — at the Macy's Thanksgiving Day Parade to revive the seasonal joy in the midst of your food coma. A great big giant turkey will then manifest out of thin air (I am hoping) and bestow your wonderful self with a $6,000 gift card to Bloomingdales — door-to-door limousine service and all — and dancing lessons at Fred Astaire Dance Studio to learn the Turkey Trot. How delightful!

Sherry told New York Daily News that the decadent dinner was aimed at spicing up this really boring celebration:

Let's face it, Thanksgiving dinner is boring, basic and, frankly, unimaginative. [This is] turkey dinner with attitude and personality.

After all, what could have more zest and personality than a trillion-dollar Thanksgiving dinner, parade and dance, while thousands of homeless people in New York City celebrate their lowly versions of giving thanks at soup kitchens, hiding from the bitter cold, away from their families?

But perhaps Old Homestead's goal was to remind the rich that they had plenty more to be thankful for than the average human. Sherry said:

We know it's over-the-top, but Thanksgiving comes once a year. If you can splurge for this, you have a lot to be thankful for.

Which, I suppose, includes an unnecessarily opulent meal, somehow completely antithetical to the purpose of the celebration.