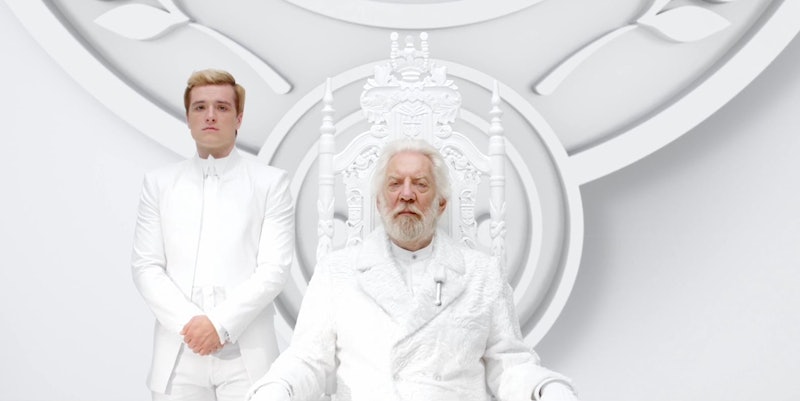 If you didn't get enough of Katniss and crew when you saw the third Hunger Games installment, don't worry because there are deleted Mockingjay Part 1 scenes galore. Director Francis Lawrence revealed that there's about 10 minutes of cut material that will be available when the DVD is released in 2015. One of those scenes that was left out was between Josh Hutcherson and Donald Sutherland's characters Peeta and President Snow.

It took place in the Capitol and would have shed a lot of light on exactly why Peeta was their spokesperson throughout the film. "It was a lovely scene. Just lovely," Sutherland revealed. "At the end of it Peeta said, ‘so you’re asking me to say all these things.’ And [President Snow] said, ‘you have everything right except one detail. I’m not asking.'”

Sutherland says the part got axed because it wasn't close enough to Katniss' perspective, and it didn't fit in that paradigm. That makes sense, but I'm sorry to hear that it was cut. Not only do I always crave more Peeta, but movies present such a wonderful opportunity to expand the perspective beyond what it is in the book.

In the first two films we got to see a lot of the Capitol and what was happening in the higher ranks, how the arena was being controlled, etc. I think the book being in first person was necessary, but the movie had the freedom to spread beyond that. It's for that reason that I wish the Peeta/Snow scene had stayed in. But while I'm making requests, I wish the movie could have included these other scenes too. [Spoilers ahead.] Although the film was good, it felt a little lacking in some areas and these moments could have helped round out the movie.

It's kind of insane that we only got to see Jena Malone's character for about three seconds. I understand that the movie was cut after her rescue, but that doesn't mean we couldn't have seen her in the Capitol. All those wonderful teaser trailers starring her and Peeta would have been cool to see in the actual film. Or better yet, what happened to the tributes when the cameras clicked off? Malone is such a gem and it feels like a waste that her talents weren't used in the first half of the movie.

Katniss' dynamic with President Coin's right hand man plays a large role in Part 2 when Boggs dies and entrusts Katniss with her personal mission of killing Snow. In the book the two develop a friendship of sorts starting with when he doesn't rat her after she disobeys orders and shoots down the Capitol planes in District 8.

FINNICK IN HIS UNDERWEAR

Considering what happens to Finnick in Part 2, I'm pretty disappointed that we didn't get to see him more in Part 1. Especially the scene where Katniss tells him about the trident Beetee's making for him, because it's one of the few humorous moments in the whole story.

At the word trident, it's as if the old Finnick surfaces. "Really? What's it do? ... I guess I better get down there," he says."Finnick?" I say. "Maybe some pants?"He looks down at his legs as if noticing his outfit for the first time. Then he whips off his hospital gown, leaving him in just his underwear. "Why? Do you find this"—he strikes a ridiculously provocative pose—"distracting?"I can't help laughing because it's funny ... and I'm happy because Finnick actually sounds like the guy I met at the Quarter Quell. "I'm only human, Odair."

Now come on, how could they leave that out? It was a prime moment to get Sam Claflin shirtless and everything. For shame, Lionsgate. For shame.

THE TRIBUTES BEING TORTURED

Morbid, I know. But it was an excellent opportunity to add drama to the film and to showcase Jena Malone and Josh Hutcherson's talents. Both are very good actors and would have portrayed their injured selves quite well. Besides, I want to see Peeta's hijacking take place because in the book you only get to imagine how traumatic it must have been. To take him to such a violent state must have been quite a process, and I think the audience deserved to see that.

Hopefully this makes it into the second part, but I wish they would have started alluding to all the time Gale and Beetee spent in the weaponry room. It's ultimately what starts to separate Katniss and Gale as she's exposed to his more violent side. And it's part of what helps her to choose Peeta, because he's calm while Gale would just stoke the fire she already has inside.

How are they responding to the war? Do they understand what's going on? I have such a hard time believing all of them are 100 percent out-of-touch and just interested in parties. It would have been cool to see the inner workings of the Capitol during this tumultuous time. And even if they had all been oblivious, it would have at least made the contrast between them and the suffering districts even more apparent.

I really love this character and what Woody Harrelson has done with him. He adds such a dark comedy to the proceedings. I miss the part when in the book he threatens to glue Katniss' ear piece to her head if she disobeys his orders again.

"That is your earpiece. I will give you exactly one more chance to wear it. If you remove it from your ear again ... I'll authorize them to surgically implant this transmitter into your ear so that I may speak to you twenty-four hours a day."

I know that Mockingjay is a serious movie with a serious plot, but sometimes you need a little humor to lighten the two hours of war and horror that went on. Haymitch was vastly underused in Part 1, and Part 2 better have a lot more Harrelson.

The fact that she wanted to take him down by herself and even made it a condition in her being the Mockingjay gave her a lot of agency. Katniss is always a badass but this part made her even more so, and it's a shame that they cut that demand. Especially because it's what carries so much of the second half of the book.

I know movies can't include everything in a book (even when it's split into two films). But I'm holding out hope that at least some of these moments are in the 10 minutes of deleted scenes. You never know!