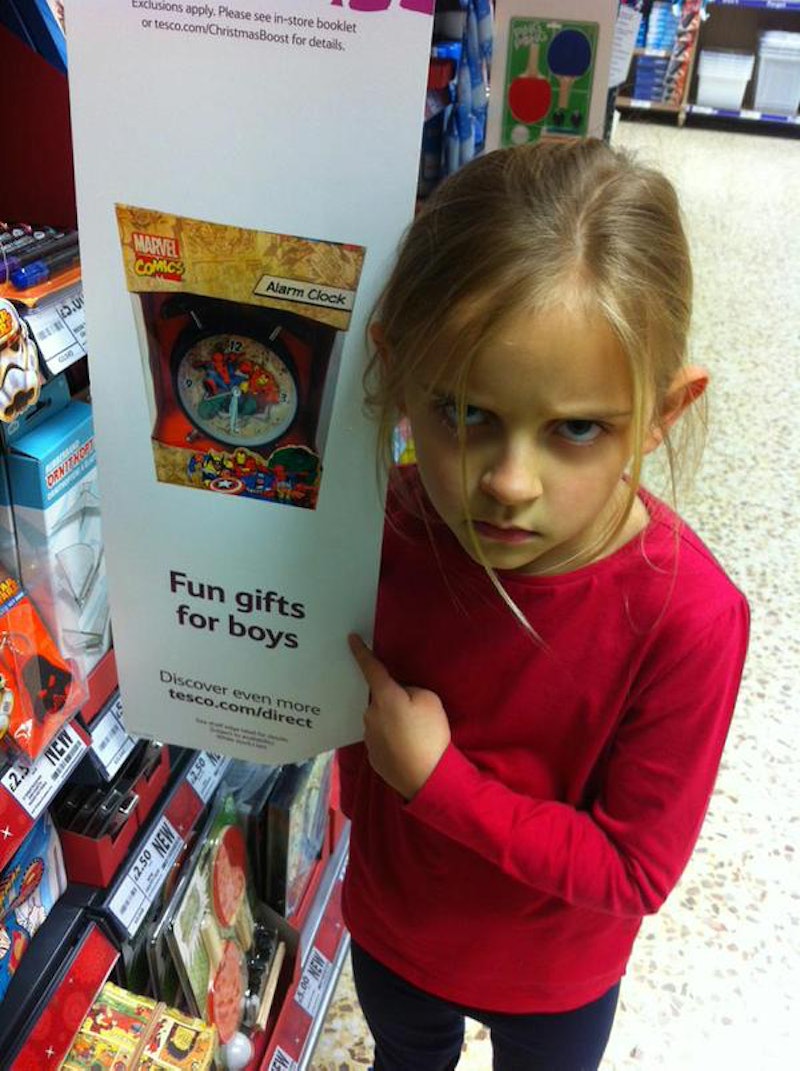 Move over, McKayla Maroney, there's a new "not impressed" face that's sweeping the nation. In more news of little girls being awesome, Maggie, a 7-year-old in Poole, Dorset, did her part to fight gender stereotypes while doing some toy shopping at Tesco, a UK-based grocery store chain. She and her mom spotted a sign depicting a cool alarm clock with some Marvel superheroes on it with the caption, “A fun gift for boys.” As a lover of superheroes, Maggie was not pleased. She said to her mom, “Well that’s wrong! Anybody can like superheroes, they’re being stupid aren’t they?”

Yes, yes they are. And with that, Maggie’s mom snapped a photo of her daughter looking less-than-impressed, and posted it on Twitter. Soon the picture went viral, prompting Tesco to apologize. A spokesperson said, “This alarm clock would make a great gift for girls and boys. The sign has been removed and we’re sorry if it caused any confusion.” Confusion is putting it lightly, but I’ll let it slide this time, Tesco, since you promised to remove the sign from all stores.

And that, my friends, is how you can put your resting bitch face to good use.

This isn’t the first time kids have used their powers for good to criticize toy companies for sexism. Last February, another 7-year-old girl sent a letter to Lego, questioning why “All the girl [Lego characters] did was sit at home, go to the beach and shop” while “the boys went on adventures, worked, saved people, and had jobs, even swam with sharks.” In response, Lego came out with a female scientist set, complete with dinosaur fossils, a telescope, and a mini lab. Even McDonald’s is getting on the gender-neutral train after a high school student wrote multiple letters to the CEO. Their staff will finally stop referring to their Happy Meal toys as either “girl toys” or “boy toys,” instead calling the toys by their actual names (revolutionary). Hopefully it won't be long before more companies follow suit, and maybe even de-segregate the toy aisles so that one day our toys can live together in harmony.

So this holiday season, whether you're shopping for toys or not, let's raise a glass of apple juice to the bad-ass kids who are challenging gender stereotypes, and the parents who raised them. Keep on fighting the good fight.

More like this
Side Character Energy Has Arrived — Here’s What That Means
By Sophie McEvoy
Why You're Seeing Green Bandanas At Abortion Rights Protests
By Lexi Inks
American Girl Doll Memes Are Going Viral On Instagram & Tiktok
By Emma Carey
What Is A “Softboy?” The TikTok Term & Aesthetic, Explained
By Courtney Young
Get Even More From Bustle — Sign Up For The Newsletter