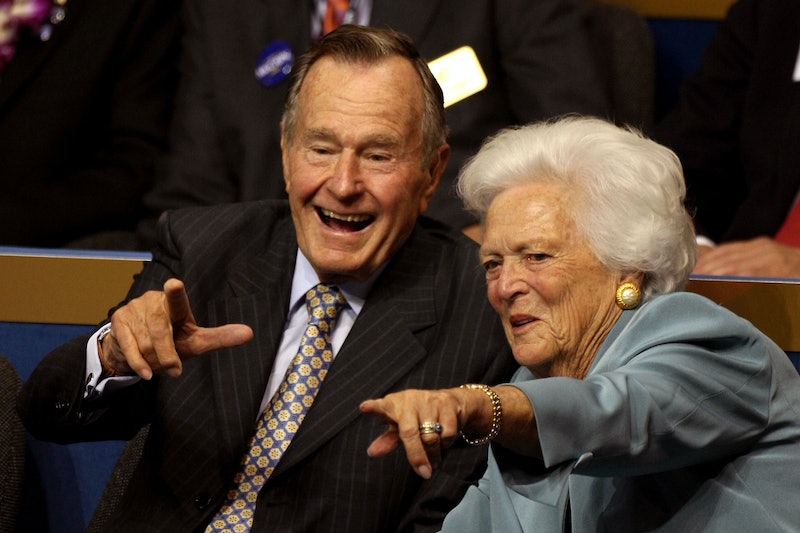 Dawwww! The Kiss Cam is notorious for catching people off guard at sporting events and making them kiss, but it's rarely as cute as when it caught this couple. At the Houston Texans and Cincinnati Bengals game at NRG Stadium in Houston on Sunday, the Kiss Cam caught George H.W. Bush and Barbara Bush and what happened after that can only be described as an emotional roller coaster of only warm, fuzzy feelings. The couple, like any couple — famous or otherwise — initially had that deer-in-headlights look, then realized that they had a very important mission to fulfill, and lastly, George and Barbara embraced and basically set the stadium ablaze with fireworks — in patriotic colors, of course.

Let's set aside the fact that this was a former U.S. President and First Lady for a second and just focus on how cute they are as a couple. George and Barbara met at a Christmas dance in Connecticut in 1941, when they were just teenagers. It was clearly love at first sight because their meeting compelled George to ask Barbara to be his date to his senior prom that year. Just to give you a sense of how cute these two are, this is what Barbara said in response: "I'm really all excited, but scared to death, too. If you hear a big noise up there, don't worry, it's just my knees knocking." Adorable!

Even more adorable? When he was in the Navy as a bomber pilot during World War II, George named three of his planes after Barbara: the Barbara, the Barbara II, and the Barbara III. Swoon.

Four years later, the two were married on January 6, 1945, which means that the couple have been together for nearly 70 years. That's definitely a rarity for the Kiss Cam — in fact, the Kiss Cam should be honored that the couple graced it with their presence. Without further ado, here's what happened when America's cutest couple appeared on the Kiss Cam — along with the exchange we sincerely hope they had.

George: "We're on what? Do I need to take out my cellular telephone for this?"Barbara: "Oh, just kiss me, you big goof."

Watch the video below (warning: It may be too much to handle).