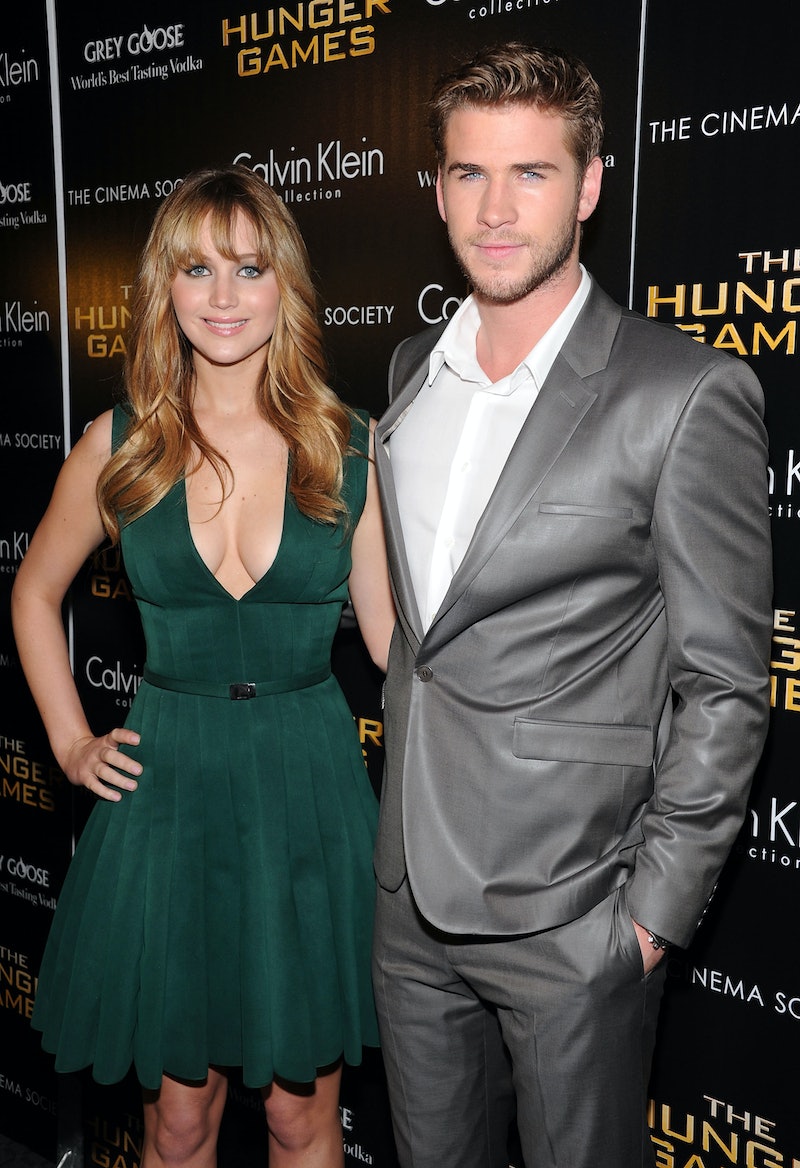 Didn't someone once say that friends make the best lovers? Not to be all up in the Jennifer Lawrence and Liam Hemsworth romance rumors like an overly eager grandmother, but someone needs to plead this maybe-relationship's case. Why? Because we're a society devoid of romance and I just can't let the real thing pass by all of us like this, OK? And you know, if I personally can't have him all to myself, I guess the next best option for Hemsworth would be J. Law. Plus she, like, actually knows him and stuff.

By now, I'm sure you've formed an opinion on whether or not you think J. Law and Hemsworth are together. Unbeknownst to the actress though, she may have just changed some doubters minds by saying some endearing things about her debonair costar, which make him even more desirable if that's at all possible. Lawrence told Nylon,

I guess the thing that surprised me is that I would never expect to ever have a man this good-looking ever be my best friend. I just would never assume those things could happen, but he is. He’s the most wonderful, lovable, family-oriented, sweet, hilarious, amazing guy. He actually taught me how to be fair and to stand up for myself. It’s my biggest weakness: negotiating. I’m a wimp about standing up for myself and Liam is always fair. He’s always on time, he’s always doing his job, and he’s good about making sure that things stay fair. He’s teaching me to toughen up a little bit. That was important, I need that.

I know her assertions were totally meant to be taken as platonic and innocent when she was relaying them, but they did make me go, "Hmm..." So, here's a few reasons why I think Lawrence and Hemsworth would be perfect together:

THEY BOTH RESPECT & APPRECIATE EACH OTHER

In addition to what Lawrence said about him, Hemsworth's spoken about J. Law similarly in the past saying, "Being around someone like Jen, who is so honest and laughs all day long, I am forced to be in the right now. I'm much happier."

& THEY ALSO LIKE TO POKE FUN AT ONE ANOTHER, TOO

An inside joke I certainly like to be in on.

There's something precious about couples with extreme height differences, but there's also something fitting about a tall guy and a tall gal finding each other. And, you know, the ability to wear heels without hunching in pictures.

THEY LOOK RULLLLLL GOOD TOGETHER

On both their left and right sides.

She's goofy, he's more demure. It's all about balance.

THEY'RE BOTH PRIVATE PEOPLE

While they may not dwell in the woods like their characters, neither Hemsworth nor Lawrence are the type of celebs the paps would catch at a night club, either. Both usually keep a low profile when they aren't promoting movies.

More like this
Everything To Know About 'The Hunger Games' Prequel Movie
By Grace Wehniainen and Radhika Menon
J.Lo Calls Ben Affleck “The Most Consistent & Selfless” Dad On Father's Day
By Jake Viswanath
J.Lo Uses They/Them Pronouns To Introduce Her Child Emme For A Special Duet
By Jake Viswanath
Lindsay Lohan Is “The Luckiest Woman In The World” After Her Marriage
By Grace Wehniainen
Get Even More From Bustle — Sign Up For The Newsletter