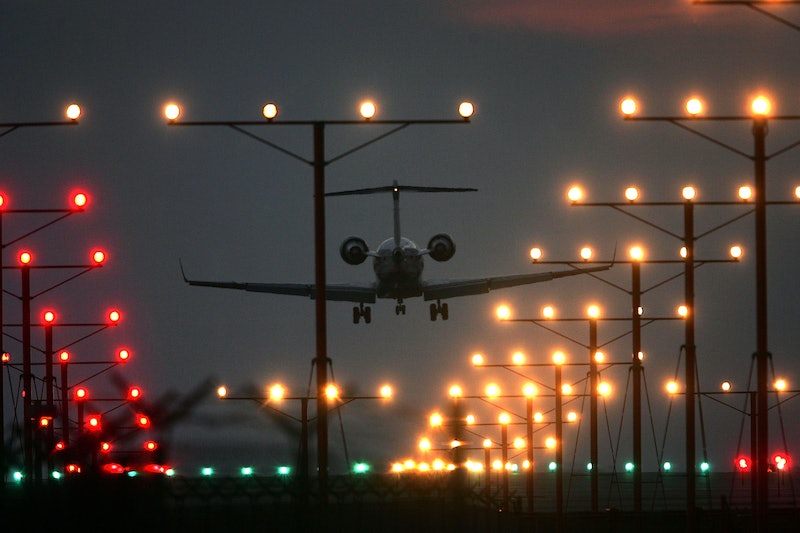 Your bags are packed, you're ready to go; you're standing there outside the terminal door (à la John Denver) then your phone bings in your pocket — it's an email from Delta Air, telling you that Wednesday's snowstorm was too heavy, the wind too strong, your flight canceled or delayed, and your Thanksgiving over. As you slump down the deliberately-uncomfortable seat that all airports deign to have, duffel bag in hand, you realize that not only are you stranded in the town you were so looking forward to saying good riddance to — at least for a few days — but you may well be stuck in the once-promising airport that now feels like a cold, grey box with equally tired, pissed-off people upon whom the same realization is dawning.

Before you start muttering curses at Mother Nature or at the incompetency of modern science for not having invented a weather-proof mode of transportation yet, take solace in the fact that a whole host of opportunities have opened up to you. No more dreading your nosy aunt bombarding you with questions of your singledom, or arguments with your neighbor's mother about you political beliefs. And fear not of all that unexpected blanks in your schedule now, because if you've run out of ideas to waste time, well, how apt, because I am the Queen Of Dawdling, and I've got you covered.

Taking naps is one of the more beautiful things about being alive, but there's always a high possibility of being rudely awaken by the sound of your roommate's music or stray ambulance sirens, or by the smell of cat poop wafting into your room (trust me, it's happened).

With everyone else in the apartment — and neighborhood — gone on Thanksgiving, you now have entire days on end to do nothing but lie in bed with zero interruptions — a luxury reserved for the privileged, really. Make good use of it!

2. Catching Up With All Your Foreign Friends

Not spending the weekend with your family means being able to hit up your foreign friends who have no Thanksgiving plans. Foreigners love celebrations local to their countries of residence, so you also have a chance to show them all the wondrous possibilities of a real American Thanksgiving dinner (e.g. a lot of mashed potatoes and gravy).

3. Getting Your Netflix On

An entire weekend of endless binge-watching on Netflix. What could be more chill than that?

In all likelihood, your flight was cancelled because of a torrent of snow that left your village/town/city/airport scrambling. And while snow really sucks sometimes, it also leaves you a chance to get into an epic snowball fight with everyone within a two-mile radius of where you live, who also stayed behind for the weekend. Fingers crossed that the hot Lebanese dude in your building will be game, too.

5. Getting Toasty For One

Missing Thanksgiving doesn't mean you have to skip the merriest part of its celebration. If anything, drinking alone is a deeply intimate and contemplative activity — one that could bring you to a higher level of mindfulness and consciousness...

Just joking. Some say drinking alone means you're an alcoholic — I say they've never experienced the joys of shouting along to "Burning Down The House" with all the wrong words, completely void of judgment and self-consciousness.

Lemon is the ultimate female role model for everyone with a sense of humor. She's independent, intelligent, (questionably) successful, and loves her night cheese.

And obviously, You + Cheese = Bliss.

7. Not Stuff Yourself To Near-Death

A big part of Thanksgiving is eating until you have to walk with a hunch because your stomach cannot handle the stretching from standing up straight. Take comfort in the fact that you will not participate in this year's gluttony, thereby fulfilling one of your annual New Year's resolution that you never before could. Thanks, snowstorm!

Also, plumbers are busiest the day after Thanksgiving (I can't decide if this is hilarious or gross, or both) so you've pretty much been saved from the mild embarrassment of their returning, for the 4th time that day, to your parents' house to unclog the toilet.

So much has been going on in the news lately. Ferguson, ISIS, immigration reform, campus sexual assaults — why not take some time from your quiet weekend to read up on these issues? You wouldn't even have to read, if you don't want to — there are plenty of infographics out there that give brief explanations. Alternatively, you can always rely on The Colbert Report or The Daily Show to both inform and entertain.

And Colbert dishes out some pretty solid life advice, too.

After all, there's really nothing cooler than being an intelligent, well-informed person — especially when you can spring it on your tired, bloated friends, post-Thanksgiving.