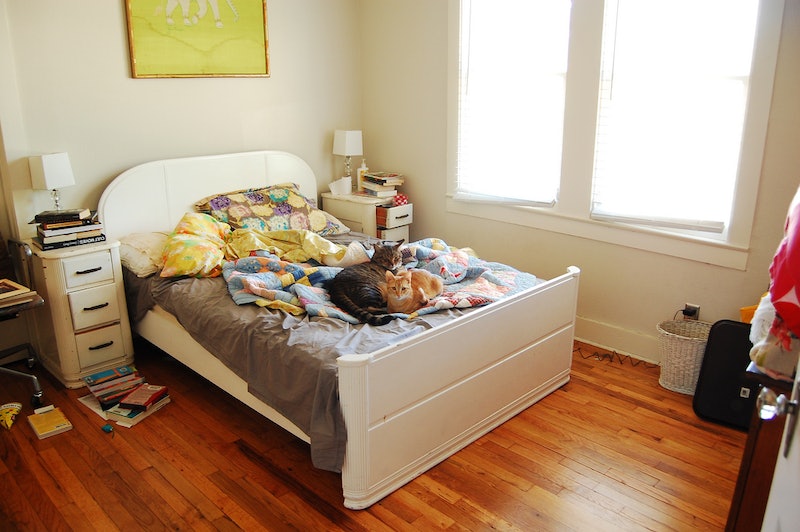 During a short visit back home, I decided to do the impossible. I decided to clean my old childhood bedroom. Really, I was looking for my high school student ID. (I'm giving a thumbs up in it, which is pretty awesome, and I wanted to show my friends how cool I used to be.)

I use the phrase "do the impossible" because my room is pretty much a bursting time capsule of my youth, and probably hasn't been properly vacuumed since 2007. The college dorm stuff that I no longer need has been shoved in a closet since 2004 (which reminds me — does laundry detergent go bad? I have some old Tide that I can't seem to part with for some reason), and piles and piles of CDs with scratched cases. That being said, I took up a black Hefty bag and decided to clean. For the first time in probably 400 years. I'm pretty sure my dad, a big and tall man of much wisdom, shed a tear of happiness based on his fear/my bravery of what truly lurks inside.

There's a lot to be uncovered inside your childhood room, which I'm sure a lot of you will have to come to terms with during your holiday visit this week. In order to help ease you from the shock and the regret, I've highlighted a few things you can expect — as well as a few things I uncovered.

For the record, no. I didn't manage to find the ID.

Saturday Night Live said it best, with the famous sketch from last Christmas titled "(Do It) On My Twin Sized Bed." The whole song was pretty much like an ode to coming home. And while the sketch was funny, the realization that a taller and wider version of you will have to sleep on something so small and dressed up with an embarrassing pink comforter isn't too funny at all.

If you have a significant other, they're probably going to end up on the couch.

2. OLD POSTERS OF MOVIES THAT USED TO "DEFINE YOUR LIFE"

For me, it was High Fidelity. Granted, it was a nice looking poster. Also, John Cusack is quite an attractive man. My poster of The Royal Tenenbaums actually made the trip to college with me, since I totally wanted to impress people with how Wes Anderson-esque I was. "I saw that movie in theaters," I'd say in a super elitist voice. "I definitely think I liked it more than Rushmore... (pensive moment) Yes, yes I did. It spoke to me."

Movies are important, but when you're a teenager? They're everything.

3. WEIRD THINGS THAT YOU THOUGHT WOULD BE WORTH MONEY

See this Michael Jordan baseball card? This was going to get me through college one day. During my baseball card collection phase, I truly felt like life would be easy after finding not one, but two cards that represented MJ's very short career on the field.

I was so afraid of someone else possibly bending my fortune, that I encased it in plastic. Once eBay was invented, I realized that similar cards were selling for a penny. Thus, under the bed it went.

4. WEIRD IDEAS YOU USED TO HAVE

When you're a child, the world is yours. And you will morph into such a well-rounded genius someday.

Aside from the sketchbooks with only one drawing in them and the 5-subject notebooks with the start of a note you wrote to a friend in high school, you'll find other weird ideas, incomplete hobbies, and mighty embarrassing things.

Friends, above is a dream that I had. At one point in high school, I figured it'd be a great idea to jot my dreams down immediately after I woke up in a sleep panic. I did this for about three nights, until the paper fell between my bed and my dresser, later to be uncovered 15 years later. I was too lazy to turn a light on, so my loopy brain-thoughts look like they're written by a drunk baby. What's a better way to get nostalgic than to reread memories that never actually happened in real life?

5. PICTURES OF YOU WITH PEOPLE YOU DON'T TALK TO ANYMORE

Back in high school, you had like, 20 friends. These friends would be your best friends forever, and one day, you'd all get together and share all of the awesome and hilarious life changing memories you had that totally helped change your personality for the better.

Oh, wait. You went to college, and eventually found them on Facebook when more schools began to allow access to it. Since then, you've either found yourself mysteriously unfriended, or you've found yourself angry every day over their poor social networking etiquette or glaringly different political beliefs.

In fact, if you see them back home during the break, you'll probably try and hide.

I swear, this Joey Fatone bobblehead was just an inside joke I had with my sister. I promise. If I thought that any boy ever would actually enter my childhood room, Joey would have been in a dumpster immediately. No feelings would have been hurt, since I'm totally not — and never was — a fan of Joey Fatone. Nor did I follow his career. Yes, he did stuff after 'N Sync. I just don't know what. I swear.

Also, since we're on the topic, that 'N Sync board game that I mysteriously own is also a joke.

You can't just throw them away, right? I mean, you paid money for it. You showered with it on the bathroom door to get rid of all of those weird square creases. It's a memory!

Honestly, just toss them out. If your school was cheap like mine was, it's probably just plastic. Unless you are convinced that you'll use it as a table covering, a rain poncho, or a last minute Halloween costume, the pictures of the big day will suffice.

For some, it might be a fistful of dead Tamagotchis. But for me, it was two Discman (or would it be Discmans? Discmen? I don't think that word has ever needed a plural) and one Walkman. These distracted me from my original mission, since I totally wanted to see if they'd still play the mountain of blank tapes and CD singles from the early '90s that littered my floor. Alas, cheap headphones weren't found within the chaos. The distraction continued, since then I became obsessed with knowing what was on the tapes. "What if there's a song on there I forgot I liked?" I said to nobody while choking on dust layers.

While I know that these devices are probably totally broken, and that the tapes contain nothing but "Tubthumping" by Chumbawamba taped off the radio, I've made it a personal mission to figure out this mystery by the time Christmas rolls around. It shall be my greatest accomplishment.

In short, proceed with caution this Thanksgiving. And maybe show how thankful you are to be home by getting rid of a lot of the stuff you've accumulated. Not only will it make your parents happy, but you'll never hear the phrase "Clean your room!" ever again.