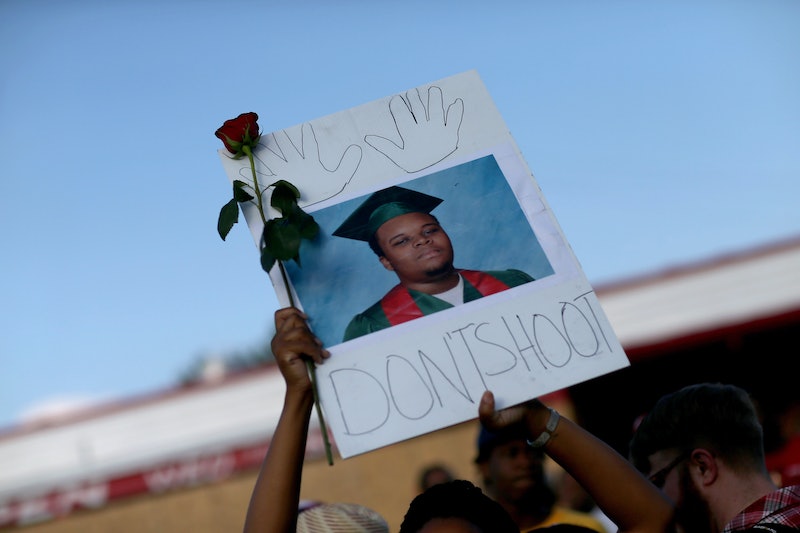 It's not easy to describe what it has been like to be a Black mother during the months between when Darren Wilson shot and killed Michael Brown and now, just after a grand jury decided not to indict him. There's a certain horrible routine you go through after you hear that a police officer has shot a Black youth. You check on your kids first. Even if the shooting wasn't in your city, there's still a moment where you need to be sure that they are okay. Then, the waiting starts: Who was the child? Do you know his/her family? These days, news like this most likely came your way via social media, so you might see pictures from the scene taken by locals. You...don't really want to look at those, because even if it isn't your baby, it is someone's baby bleeding, or worse yet, already gone.

In the hours after a shooting happens, you will read updates that detail what the cops are doing, what the community is saying, and still, you are ultimately just waiting for that baby to be identified. And make no mistake, no matter how old they might look, to you they are probably going to be a baby. Because you can't help but think about your own kids, and know that somewhere a mother is about to grieve for a child she carried. You know that a father is going to mourn a baby that rested on his chest doing that sleepy snuggle babies do, and that they both will remember how their heartbeats were the only rhythms in the world that could bring sleep. When any young person gets shot, they immediately become, in your mind, your baby—because you can't help but feel what their parents must be feeling in that moment. And when that baby is Black, and their shooter was a police officer, those feelings are infinitely more complex and unbearable than can easily be explained.

Eventually, the body in those hastily snapped pics is identified. The police start making statements, and the crowd that has inevitably formed responds to the tenor the police choose to adopt. In a community that has to worry about hearing news like this every single day, police behavior can do a lot to escalate or calm the anger. If the cops express sadness, show respect for the family's pain, and do not attempt to plead their right to kill someone? The crowd grieves, watches, but the anger doesn't overflow.

That, unfortunately, is almost never how these things play out.

Usually, police-on-Black-youth shootings happen in communities that are plagued with heavy-handed cops who act drunk on their own power, and who believe (or at least seem to believe) that Black residents aren't really people. They view themselves as people, sent in to govern a bunch of animals who are less than human—animals who are inherently dangerous, need constant supervision and control, and should be feared at all times. Luckily for them, this "Black people are less-than-human" mentality makes it much easier to pull that life-ending trigger, so that fear is manageable for these cops.

So when something like the Michael Brown shooting happens, the police too often express no sadness. They are brusque—or, worse yet, insulting—to the grieving community, and they declare that their own right to safety trumps all other concerns. That is guaranteed to take an already hostile, upset, and grief-stricken neighborhood straight into rage. Because the message being sent by that kind of response from police is clear: Black youths are merely being allowed to live by white cops who have the power to rescind that permission at any time, based on even arbitrary and unsubstantiated "fear", without consequence. What could possibly make a Black population feel more terrified or more dehumanized? What could possibly make a mother more completely panic-stricken every time her Black child leaves the house?

In the months that follow, the history of the person who was shot will be detailed. Police behavior that was well-known in the community will be in the news, possibly for the first time. And even as you hope that the officer will at least have to face due process, you know that the chances are low. You know that, in fact, it's the dead Black person who is really on trial. If they have any criminal history, it will be brought up no matter the circumstances of their death, as will any suspensions from school, social media updates that might cast them in a bad light, and character-eroding pictures (which may or may not even be of them; it really doesn't matter since once those photos are introduced to the public consciousness, the association is already made and can't be undone).

So you sit through the character assassination of someone's baby, knowing that the officer's history will not be examined as closely, even if they have a history of shooting people while on duty. You might protest if you're local, signal boost everything from information about what has happened to calls for supplies for protestors online. You'll fundraise, send donations for community centers, and go the events in your own city as life permits. And you worry, because what is happening in Ferguson, is also happening in Los Angeles, New York, Cleveland, Detroit, Boston, Chicago, and so many other cities it's impossible to keep track. A Black person is killed by police every 28 hours, and even though every life matters, it is almost impossible to give the same time and attention to each case.

In other words, you do everything you can to help bring this crisis to public attention because, while you're waiting for justice for one mother's baby, you have to keep your hands busy and that might as well be doing the work of trying to make the world see how violently threatened all of our Black babies are. And that's really what it feels like to be a Black mother at this moment in America: Complete terror at knowing the real vulnerability our kids face simply by existing, pressing urgency to do what we can to illuminate and solve the conditions that create that threat, and desperate outrage when justice isn't doled out fairly.

If you talk about the case on social media in any way, you will discover which of your friends isn't really your friend. You see which D-list celebrities think trolling grieving communities is a good time. You learn who insists that their tiresome jokes are satire and that you should appreciate them. You'll find out how many folks think petty misdemeanors should be capital offenses if they involve bodies that don't look like theirs. It's eye-opening, but also it makes you even more afraid for your family and your friends because it highlights that the system is sustained and supported by individuals. You see that structural racism doesn't look like the bogeyman. It looks like your colleagues, their friends, their families, and sometimes, horribly, members of your own family.

And still, you hold out hope, and wait for some sign that the system will at least attempt to examine itself. For word that it will try to correct itself, so that in another 28 hours or 28 days you won't have to start the process all over again for another child.

Then the day the decision is announced rolls around. You have never gotten your hopes up for a conviction. You knew the chances of that were nonexistent when you were a kid, and it was your parents or grandparents doing the worrying and waiting. No, you're realistic in your hopes and have protested, written letters, and asked again and again for only the first step towards justice...a trial. Just a trial. Sometimes you even get one. Most of the time though...you get what happened in Ferguson. The barest hint of a proper investigation, an announcement that blames the victim, and watching a community convulse in pain. Again. You cry with them, you hug your babies close, and then the clock turns over. And it starts again. And every time, it feels like the only thing keeping you and your community from being the story is sheer luck. And you never ever know when it will run out.