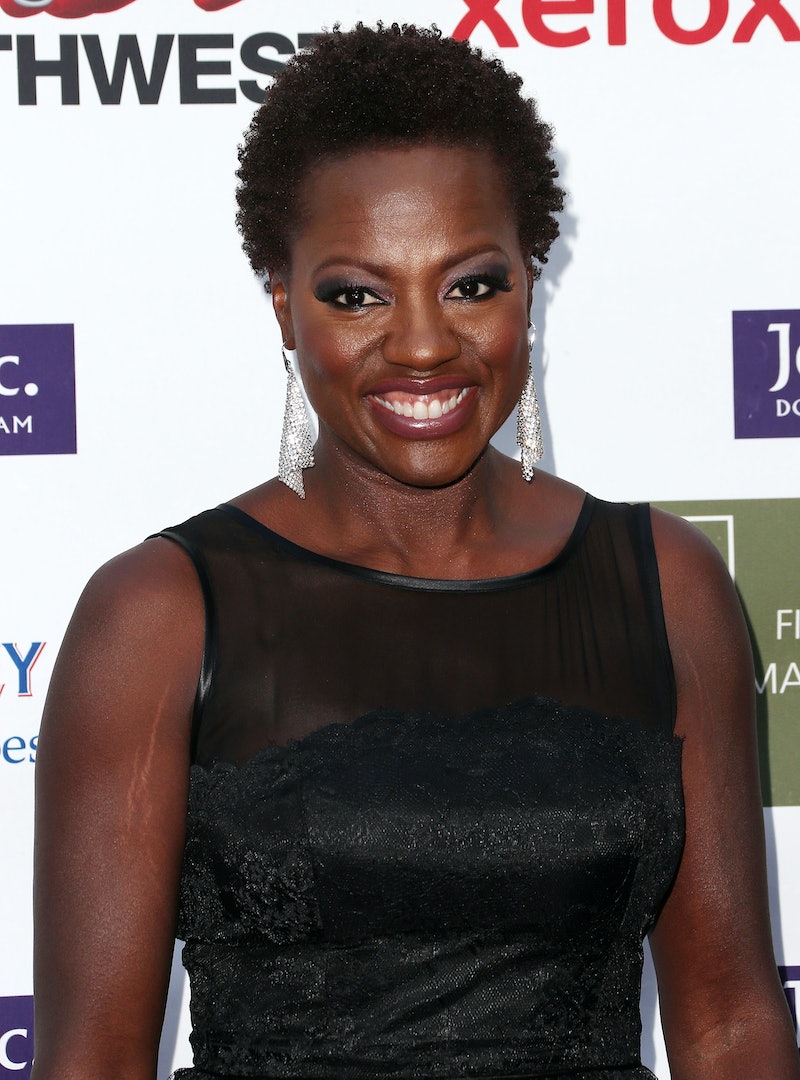 Prisoners, a vigilante thriller about a man desperate to find his kidnapped daughter, opens on Sept. 20, and a the positive reviews are already pouring in. Denis Villeneuve's sharp direction and fast-paced script have received huge praise, but it's the performances that have gotten critics' attention the most. The film's star, Hugh Jackman, has received raves for his portrayal of a lost, grieving father, and Jake Gyllenhaal and Paul Dano, who both have prominent roles in the movie, have gotten enormous compliments, as well.

The other members of the cast — Maria Bello, Melissa Leo, Terrence Howard and Viola Davis — have also received acclaim for their performances, with critics saying that they managed to make the most of small roles. Davis, in particular, has gotten critical attention. "In just a handful of scenes each, Bello and Davis suggest the full, inexpressible weight of motherly grief," said one reviewer from Variety.

Another at the Hollywood Reporter explained: "Howard and Davis are excellent, as always, though one flaw of the film is that they have too little to do in the second half of the story." And they go on and on. The consensus, it seems, is that Davis gives a stand-out performance — when she's given the chance to appear on screen.

In 2011, when Davis got this close to winning an Oscar for The Help, it seemed all but certain that her career was on the rise. She'd already received an Oscar nomination a few years earlier for Doubt, but it was her performance in the critically adored 2011 film that got Hollywood's attention.

Everyone assumed that the movie and the resulting nomination would allow her to take on a wider range of roles than had been possible before. The film's success, it seemed, would inform Hollywood that black actresses were just as capable as white ones to lead movies, and that more doors would be open for Davis and other actors of color.

Yet since The Help, Davis has only had one starring role, and it might not even count — 2012's Won't Back Down featured both Davis and Maggie Gyllenhaal as the leads, but Gyllenhaal was given substantially more screen time. Prisoners is her fourth post-Help movie, all of which put Davis in a supporting role.

She has three more movies in the works, but only one of them, Cyber, looks like it features her as the lead, or at least the co-lead. This is extremely frustrating, because Davis is one the most talented actresses working today. She deserves to be a star. So what's going on?

You can blame Hollywood. For awhile, it seemed like the The Help, a wildly successful film with a predominantly black cast, was going to have an effect on the industry's tendency to white-wash their movies, but over two years later, very little has changed. There are still few roles written for African-Americans, especially for black actresses.

Black men are making some strides — this fall alone, several highly anticipated movies with black male leads will be released — but for women, practically no progress has been made. Hollywood's still resistant to give black women leading roles in major studio movies because they're afraid of alienating white audiences, despite The Help and TV shows like Scandal proving otherwise.

Maybe down the line, things will change, and Davis will be playing parts worthy of her talent. In a 2012 interview with The Hollywood Reporter, she spoke about Hollywood's glaring inequality.

"That's a metaphor I use for my career, you know? You can't be perceived as 'the black actress who doesn't get the same kind of roles as the white actress'", she said. "You gotta run the same race. You gotta give the same quality of performances. You gotta have the same standard of excellence, even though people know that you're coming to the race in a deficit. That's just what life is about."

It's a strong statement, and it shows how keenly aware Davis is of the current state of Hollywood. Despite her massive talent, she'll never be on equal playing ground unless the industry decides that it's time to make a change.