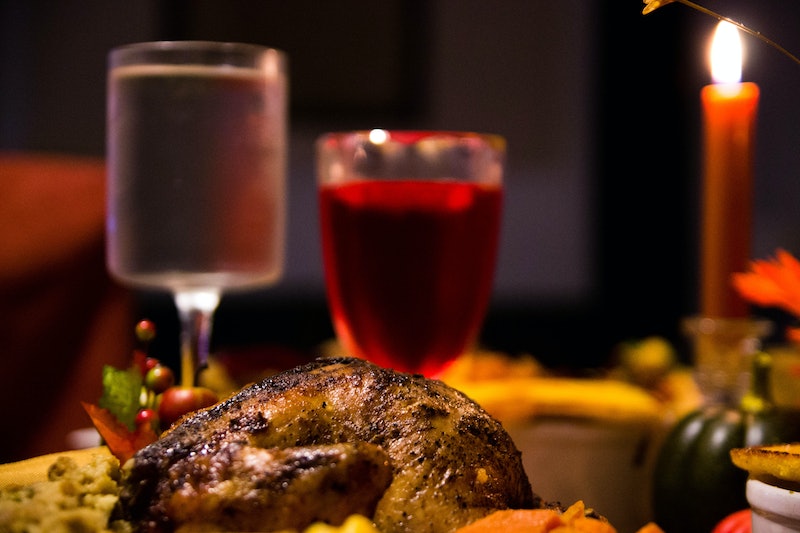 Woohoo! It's Thanksgiving eve! OK, yes, I know not everyone is as excited as I am. Thanksgiving happens to be my favorite holiday, but that's because it combines my second-favorite activity, cooking, with my all-time favorite activity, eating. Not everyone is as food-focused, however, and just the thought of the holiday — all that traveling, figuring out what dish to bring, spending uninterrupted time with family — is enough to court a nervous breakdown. But there are ways to mitigate Thanksgiving-induced stress simply by getting to know some important numbers. Here are the most essential figures everyone should know before Thanksgiving — plus some fun facts.

The first Thanksgiving was celebrated in 1621, when the Pilgrim founders of the Plymouth Colony held a three-day feast with the Wampanoag to celebrate the colony's first successful harvest. Since then, Thanksgiving has evolved into a holiday that carries some of the most time-honored American traditions, from eating a turkey feast (even the sides are traditions unto themselves) to watching football after dinner. Ultimately, it's a reason to unite with friends and family each year to give thanks and eat to your heart's content.

Whether you're hosting this year or traveling long-distance to attend dinner, there are some important facts to learn in order to make it through Thanksgiving unscathed. We're breaking the holiday down by the numbers.

Since Thanksgiving is celebrated in nearly every household in the country, it's bound to produce some astounding statistics.

In 2011, 736 million pounds of turkey were eaten on Thanksgiving.

The average American consumes 16 pounds of turkey each year.

In 2010, 7 billion pounds of turkeys were raised, which is equivalent to nearly 10 Empire State Buildings.

If you're hosting Thanksgiving this year, good luck. Hosting requires a ton of planning and strategizing. Hopefully, you've done all of your grocery shopping by now, but if not, we're answering your most crucial questions to make sure your guests are well-fed.

How many pounds of turkey should I get per person?

A good rule of thumb is 1.5 pounds of turkey per adult, if you want a good amount of leftovers. So if you have 10 adults in your party, get a 15-pound turkey. If you happen to be hosting an extremely large party of 20 people are more, break the total weight into more than one turkey. It's easier to cook two 15-pound birds than one massive 30-pounder.

How many hours does it take to thaw a turkey?

It generally takes 24 hours to thaw every five pounds of a turkey. So if your turkey is 15 pounds, give yourself three days to thaw it. That means no last-minute turkey shopping!

And to cook it?

How many sides and appetizers should I make per person?

For appetizers, try to aim for six to eight pieces or servings per person. For example, if you're making stuffed mushrooms for 10 people, make 60 to 80 pieces.

How many calories will I eat on Thanksgiving?

The total number of calories the average American consumes on Thanksgiving, including turkey, sides, dessert, and drinks, is an astounding 4,500. That's more than two days' worth of the FDA's recommended caloric intake.

How long will I have to exercise to burn that off?

This year's holiday may be more stressful than previous years for those in the northeast as a massive storm has started to roll through, threatening to bring heavy rain and snow and delay air travel. Here are some important travel-related numbers for those of you in the northeast region and elsewhere.

How many hours should I give myself at the airport?

Normally, it's recommended to arrive at the airport one hour before your domestic flight, but during Thanksgiving week, triple that. Heavy lines at check-in and security will prolong wait times, so give yourself at least three hours — even if your flight ends up delayed anyway.

How many hours can I expect my flight to be delayed if I'm traveling to the northeast region?

Expect delays of three to six hours, if you're lucky. At least 550 flights have been canceled on Wednesday, so plan for alternative modes of transportation if you can.

About 91 percent of all Thanksgiving trips are made by car.

Around 42.2 million Americans are expected to travel at least 50 miles from their home for Thanksgiving this year.

Los Angeles residents will be stuck in traffic 36 percent longer on Thanksgiving than a normal day, making it the worst traffic in the U.S. since it already tops the nation in average traffic times.