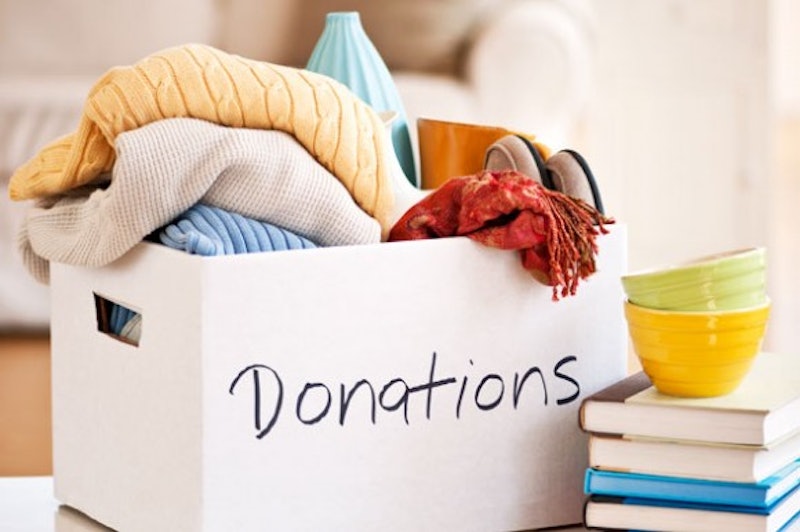 Deciding whether to toss that floral, vintage Japanese dress you fell in love with in 2004 but have never worn, or the just-a-bit-too-small blue jeans that will fit someday, can be torturous. On the one hand, the items are taking up prime closet real estate. On the other hand, the second you ditch ‘em, you’re likely to be invited to a floral-vintage-Japanese-dress-themed party. You just know it. So by the time you finally DO grit your teeth and purge your wardrobe (something 85 percent of women apparently need to do), you’re understandably over making choices. But what you do next — as in, where you actually take the rejected merchandise — can be the most important decision of the whole process. Consider this: Americans send 11.1 tons of clothing to landfills annually, meaning that trashing your used threads is not an option; at least not one you can feel good about. So what’s the environmentally-savvy girl to do?

While you could sell the unwanted duds online, at a yard sale or to a consignment shop, we’re about to enter the season of giving — so you might rather hand them down to your favorite kid sister or niece (or maybe your least favorite, if you’ve been hoarding the clothes since, say, your Clarissa Explains It All phase). The downside? This means sacrificing the tax write-off that donating to a non-profit charity affords. Since this also happens to be the season of holiday shopping, we’ll take all the help we can get (and in this economy, the reality is that many of us need that help all around). Plus, it’s nice to think of your old blue jeans finding a new home with a neighbor in need.

The only problem is, that ideal image of your old and beloved pom pom sweater landing in the arms of someone who can reincarnate its spirit doesn't always happen. In fact, because most charitable organizations who accept clothing are overwhelmed with castoffs (think Salvation Army and Goodwill), 80 percent of donations are sold to textile recycling firms and either turned into rags and pillow stuffing, or resold to international shippers and sent overseas. The garments that end up in developing Asian, Central American and African countries are then resold a final time to underprivileged citizens which, some argue, is a double-edged sword. The glass half full side? The charitable organization you gave to is still benefiting from the sale of your clothes. And the world’s needy are still getting access to good clothing at reasonable prices, or perhaps at no price at all (which is great, considering how many people on a global scale are in need). So what of the glass half-empty angle? As so often happens, big businesses are profiting from what you thought was charity. At the same time, dumped merchandise from America might be having a negative effect on the home-grown textile industries of developing countries, as well as their economies at large.

Because much of this happens under the radar of the collective public, people are baffled — and sometimes incensed — when the middle man (the charitable organization) gets cut out altogether, meanwhile for-profit donation bins belonging to textile recycling firms are seen lining the street. Granted, many of these bins have been placed illegally, and they do look an awful lot like the bins of not-for-profit charity groups, which can be misleading. (Who do they think they're fooling with that pink paint?!) But I’d argue that more non-landfill options for people to leave their circa-1989 hot pants isn’t all bad, considering those hot pants are likely ending up in the hands of a textile recycling business anyway. At least that’s the argument of retailers like H&M and NorthFace who have begun collecting unwanted clothing items from customers in their stores, and working with a Swiss company called I:Collect to turn them into new garments. Who would have thought recycling could get so complicated?

Wherever you choose to take your closet castoffs this holiday season, it’s best to do your research. (An organization called CharityWatch can help you differentiate the good from the could-be-better groups.) And maybe give some extra thought before tossing that vintage dress. A study out of the UK found that extending the life of a garbage-slated garment for just three more months can reduce its waste footprint by 5-10 percent. This holiday season, it’s hard to think of something more fashion forward than that.

More like this
Lizzo Celebrates Juneteenth With Pan African Flag Dress
By Dominique Norman
These Swimsuits & Cover-Ups Look So Good On, You'll Wear Them Constantly
By Sara Brown-Rigoli
Yes, You Can Buy Off-White’s New Beauty Range In The UK
By Tomi Otekunrin
10 Show-Stopping Manicures From The 2022 BET Awards
By Paris Giles
Get Even More From Bustle — Sign Up For The Newsletter