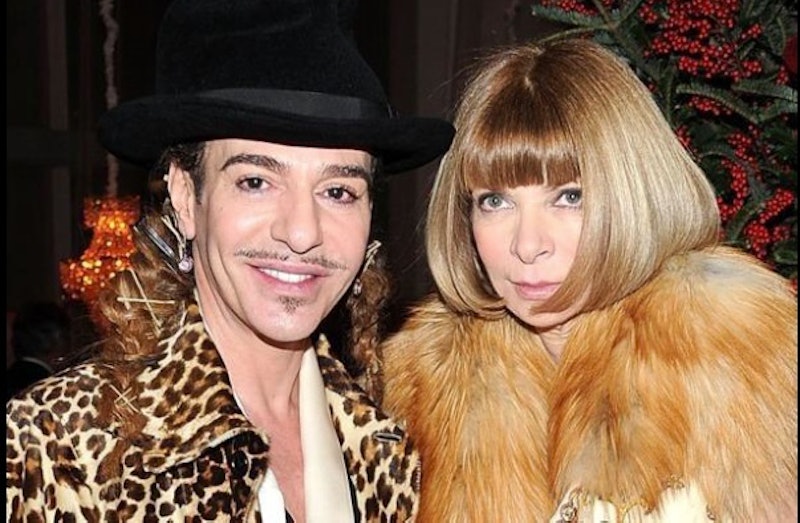 Rumor has it that fashion icon and Maison Martin Margiela's new creative director John Galliano will be presenting Anna Wintour's Outstanding Achievement Award at the British Fashion Awards next week. It was announced a few weeks ago that the Vogue editor would be receiving the honor, and though the announcers won't be revealed before the December 1 show at the London Coliseum, it would be special for Galliano to present it to her — but not shocking. The role would be a part of his triumphant return to the fashion industry.

It makes sense that he'd present to Wintour, specifically — she was one of the few people to openly support the shamed designer after his firing from Dior in 2011 after a string of anti-semitic comments made in a cafe in France were made public. After a few years off and some time in rehab for alcohol addiction, Galliano is beginning to regain his status and credibility. In January, he was asked by Oscar de la Renta to contribute to the late designer's fall collection, and he was named Margiela's creative director in October.

Grazia Daily reached out to the British Fashion Council to confirm that Galliano would be presenting, but the group said it would not comment on presenters before the awards. Many fashion insiders are predicting that Galliano will hand Anna her well-deserved award, though, and you know the saying: where there's smoke...

More like this
Rita Ora’s Sheer Dress & Mermaid-Inspired Prosthetics Stun At British Fashion Awards
By Sophie McEvoy
Florence Pugh Wore A Spicy Backless Gown To The British Fashion Awards
By Allie Fasanella
The 8 Coolest Haircut Trends Of 2023
By Audrey Noble
Dua Lipa On YSL Beauty, Plus Her Fearless Approach To Hair & Makeup
By Erin Stovall
Get Even More From Bustle — Sign Up For The Newsletter