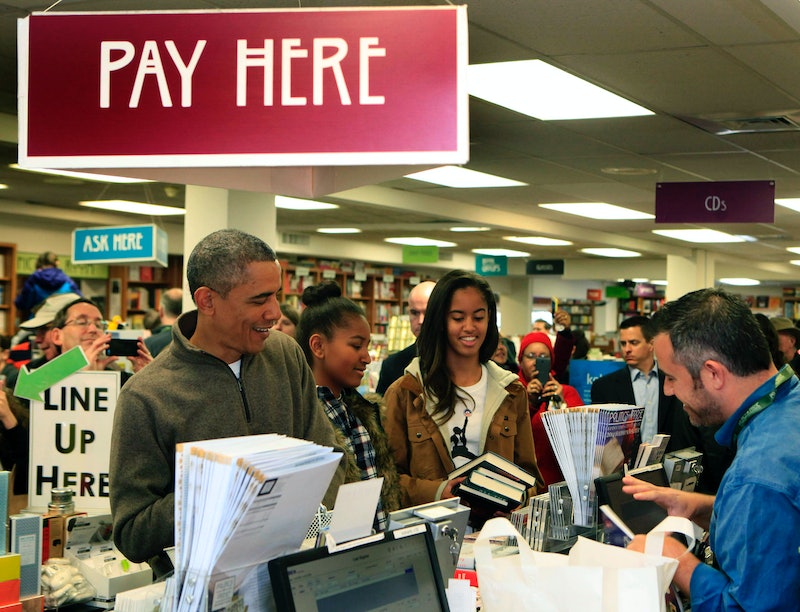 Step away from that Target and head on over to the nearest mom-and-pop store — it's Small Business Saturday, a day where Americans (somewhat) acknowledge that retails shop outside of the mall exist. For the fourth year in a row, the president even joined in on the fun. President Barack Obama shopped at an indie bookstore on Saturday, buying nearly 20 books and making corny dad jokes at the register (in front of Malia and Sasha, naturally).

Obama took his two daughters to Politics and Prose, an independent bookstore in Washington, D.C. owned by two former Washington Post reporters. According to the Associated Press, Obama came to the register with a bag full of books — 17 titles, to be exact. Interesting enough, the president purchased books meant for both mature and young readers. Some of his new additions to the White House library include Anthony Doerr's National Book Award finalist All the Light We Cannot See, Evan Osnos' National Book Award-winning Age of Ambition: Chasing Fortune, Truth and Faith in the New China and two books in the Junie B. Jones children's series by Barbara Park.

Although it seems like Obama is a follower of the National Book Awards, 2014 winners Redeployment by former Marine Phil Klay and Jacqueline Woodson's memoir Brown Girl Dreaming were missing from his books stash. Why the snub, Obama?

Most of the shoppers seemed welcoming of Obama, even giving the president some applause when he entered the bookstore. However, Obama did receive a few heckles while paying for his immense purchases. Reuters reports that one shopper called out, "When are you going to close Guantanamo?"

The president responded, "We're working on it. Any other issues?"

Of course, Obama also had a trove of dad jokes on Saturday, because every dad knows they have to embarrass their teenage daughters while in public. "Do I get a discount for that?" the president joked with the cashier (haha, get it, Sash and Malia?).

When Obama handed his credit card to the cashier, he said, "Hope it works!" (It did.) Sasha and Malia didn't seem too annoyed with their dad and his corny dad jokes on Saturday. At least, there were a lot less side-eying than at Wednesday's pardoning of the turkey. This wasn't the first time the president visited Politics and Prose. Obama also shopped there with his daughters on Small Business Saturday in 2013. However, this year's visit was still unexpected to the owners and staff of the popular Washington, D.C. shop.