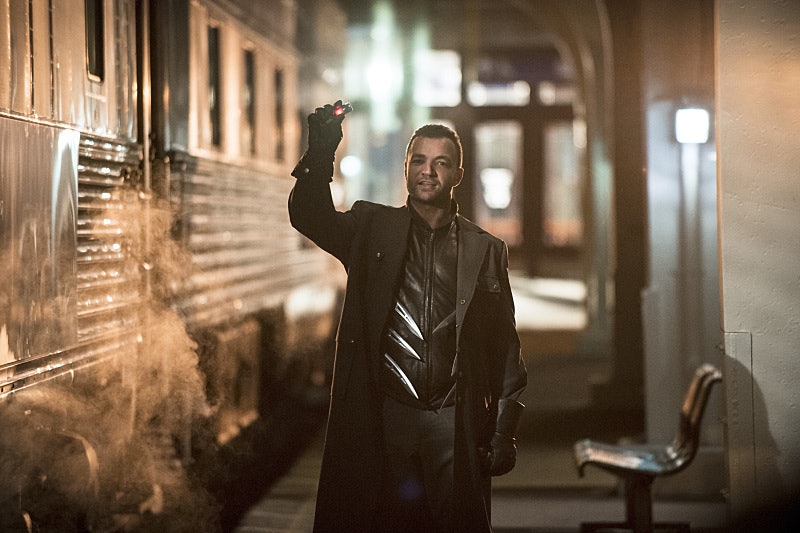 Have you ever thought to yourself, why doesn't DC Comics create more Australian villains? If you're part of that group, don't worry, because DC answered your prayers long ago. Long time Flash villain, George Harkness, aka Digger, aka Captain Boomerang has been around since the 1960s, and now he's stopping by present day Central City. Captain Boomerang will appear in the two-night Arrow and The Flash crossover, and will be played by Spartacus' Nick Tarabay. The villain will appear in both nights of the crossover episode (which will undoubtedly be the best thing since sliced bread, TBH), but before we get into two whole nights of Flash and Arrow goodness, who is Captain Boomerang?

Like I said, Captain Boomerang fills the entire quota for boomerang-wielding villains. He does in fact hail from Australia, and as a child made boomerangs that he used for evil. After he was busted robbing a local store, his mother gave him a one-way ticket to Central City. He was then hired by a Toy Company as sort of their boomerang mascot — appropriately titled Captain Boomerang — and audiences made fun of him, so he turned to evil once again. He started robbing jewelry stores, which is when he first encountered our good friend Barry Allen.

Harkness went to great lengths to "fool" the Flash into believing that everything was a big misunderstanding, claiming that someone else was impersonating his persona of Captain Boomerang, and since Barry's a good guy, he believed him. But not for long. Soon the two were constantly at wits with each other. Once, Harkness used his "Rocket Boomerang" to send Flash into outer space, and when he came back he was quite mad. I would be, too, you know, if I had been sent into outer space on a boomerang.

There are actually two Captain Boomerangs in DC comics, made up of a father and son team. After Harkness died, his son Owen took up the mantle. Flash's version is most definitely the first — even IMDB credits him as George — but he looks more like the second Captain Boomerang. Harkness' costume was always bright blue with little boomerangs all over it, resembling something that might be bought at Urban Outfitters nowadays. Owen, though, would wear a trench coat with boomerangs tucked into the pockets, which looks just like the Flash version. Probably for the best.

And though he's been a Flash villain for forever, it's actually Arrow that cast the character. Their reason for doing so is pretty important — Arrow's version of Harkness will have him be a former A.R.G.U.S. operative. He's not out for Oliver (or, Barry) but rather Amanda Waller, and the whole A.R.G.U.S. plot thickens. In the comics, Waller actually recruited Harkness for her Suicide Squad. Clearly the geniuses behind The Flash and Arrow know exactly what they're doing, so we'll trust them with this new characterization. No matter what direction they take Harkness in, it'll be exciting to watch him join the worlds of both Central and Starling City.