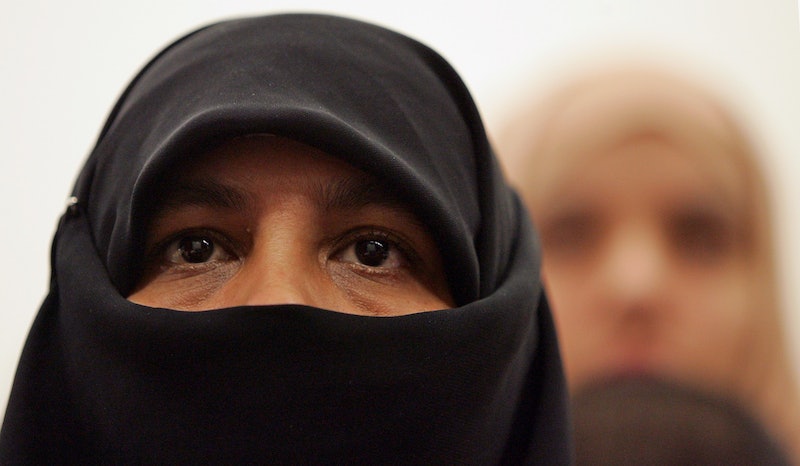 In an op-ed in The Telegraph yesterday, British politician Sarah Wollaston lashed out at UK universities and courts for allowing women to wear face veils, or niqabs. Her opinion has not been a popular one.

Wollaston started out by noting that, in the past month, Birmingham Metropolitan College lifted its ban on students wearing the niqab and a British court allowed a defendant to give evidence whilst veiled. I read that news and thought: Good for those institutions! Wollaston's takeaway? That the lifting of the ban should be a "wake-up call for feminism."

Apparently, Wollaston is of the ilk that thinks feminism demands every woman conform to her particular vision of equality. "It is time for politicians to stop delegating this to individual institutions as a minor matter of dress code and instead set clear national guidance," she urges.

There are serious consequences for women if they are hidden from view in our courts and our classrooms. For individual campaigners this may be a free choice but what of those who, once the niqab becomes an accepted norm, are pressured into compliance as a badge of piety or purity? It would be naive to think that a thirteen year old would have complete freedom to reject family or peer group pressure.

Yes, yes, much better that our hypothetical 13-year-old have no freedom to choose or reject the niqab at all ...

What bizarre logic. In Wollaston's worry that some women may be pressured into wearing veils, she wants to prohibit any woman from choosing to wear a veil. Isn't that an even worse form of coercion?

And I'm equally baffled by the "serious consequences" that could stem from a relatively small proportion of UK women wearing veils publicly. What—people might get the impression that Britain supports religious freedom and freedom of expression? The horror!

In a perverse distortion of logic, Wollaston argues that:

"It would be a perverse distortion of freedom if we knowingly allowed the restriction of communication in the very schools and colleges which should be equipping girls with skills for the modern world. We must not abandon our cultural belief that women should fully and equally participate in society.

So ... we must ensure that women are full and equal in society by patronizingly asserting we know what's best for them and limiting their choices. Got it!

Thankfully, Wollaston's BS has provoked a proper backlash. On Twitter, critics fired back at at her with comments like:

"Who am I to tell a woman I meet in the street or sitting next to me on the bus that because I cannot see her face she is not completely equal nor able to participate fully in society?"

Right on. If feminism is about accepting women as full people, that means also accepting that not all women will make choices you like. And it means recognizing that a woman can be a "full and equal" member of society no matter what she chooses to wear.