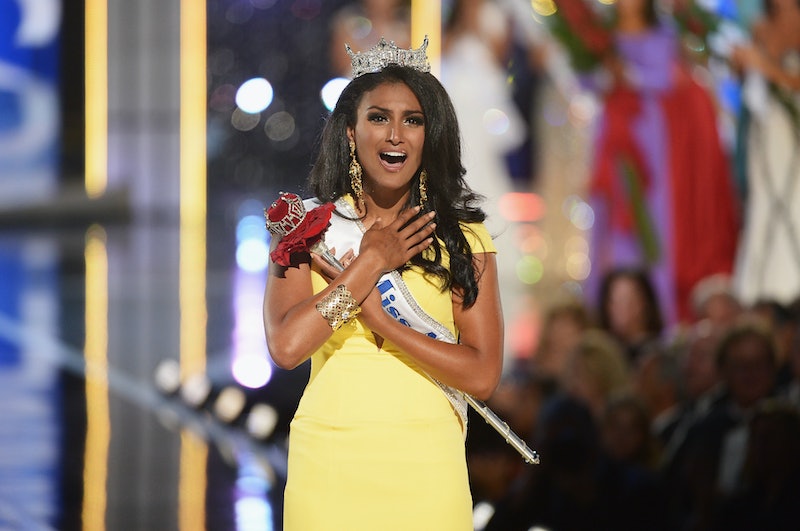 You didn't watch Miss America last night because you were too busy not caring about pageants, but there are a few things that are sort of interesting about the whole thing. First, it's back in Atlantic City after being held in Las Vegas for nine years, which is great because the Jersey Shore could use some love, a.k.a. commerce, after last year's Sandy and this year's fire. Second, the talent portion was reinstated as part of the event, and third of all, Miss New York Nina Davuluri was crowned Miss America, and she's the first ever contestant of Indian descent to win the competition, which is very cool.

While there's still a solid argument that women parading around on stage in little more than butt glue, Vaseline, and false eyelashes is not necessarily a leap forward for feminism, hey — at least there are some improvements in the diversity category.

And if you're going to pay any attention to a Miss America, Davuluri is one to know about. Not only is she breaking new ground racially speaking, she also brings a fresh perspective from a health standpoint. The 24-year-old Fayetteville, N.Y. native lost 50 pounds after struggling with bulimia. Back in July, she told the Syracuse Post-Standard:

People who’ve been overweight, especially women, feel like at a moment’s notice we can go back to where we were. It makes you more sympathetic, more empathetic. You don’t judge. I’ve been there, and if I can pull myself out of where I’ve been, anyone can.

Add to that the fact that she graduated from the University of Michigan with a degree in brain behavior and cognitive science, her Michigan Merit Award and a National Honor Society Award, her plans to become a doctor, and the simple fact that she charmed everyone when she missed her cue to take the stage during the talent portion (she performed a Bollywood dance), and Davuluri might be the most refreshing Miss America we've seen in a long time.

Unfortunately, not everyone agrees. Thanks to Twitter, many "fans" of the pageant are lamenting the fact that a white woman didn't win. Davuluri, though, isn't letting that get to her. She's rising above the insensitive and racist remarks. She told the AP: "I'm thankful there are children watching at home who can finally relate to a new Miss America."

Smart, empathetic, charming, and open-minded? This woman brings a lot of new and exciting potential to the antiquated role of Miss America.

More like this
Kim Kardashian & Pete Davidson Took A "Very Romantic" Couples Trip To Tahiti
By Jordyn Tilchen and Bustle Editors
Jill Zarin Said Her 2011 RHONY Firing “Felt Like A Death”
By Brad Witter
Taylor Armstrong Would “Definitely” Return To RHOBH After Her Season 3 Exit
By Brad Witter
Which RHODubai Housewife Has The Biggest Net Worth?
By Hugh McIntyre
Get Even More From Bustle — Sign Up For The Newsletter