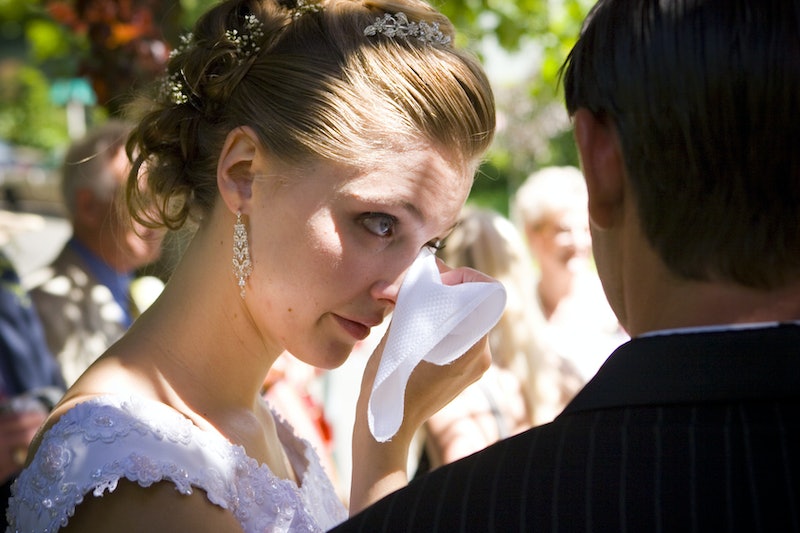 "Tears of joy" seem like an utterly baffling occurrence at first — how could it be that you're having a response normally associated with sadness during a time that should be provoking a response that's happy? Enough of us have experienced them ourselves (or witnessed them) to know that tears of joy are actually fairly commonplace. But a new study goes further than simply establishing the normalcy of happy tears — researchers now know their underlying purpose. The surprising reason you cry when you're happy is that it helps keep you from feeling too happy for too long. Wait, what?

Some participants experienced "dimorphous responses" — i.e. two feelings at once. With the babies, this often took the form of thinking the baby was cute but also saying something aggressive, like "I want to pinch that baby's cheeks!" or "I could eat it right up!" Five minutes later, the participants who had this dimorphous response had bounced closer back to their emotional baseline than the people who just thought the babies were cute. In other words, the dimorphous responders showed more emotional resilience.

Upon reflection, the dimorphous responses' effect actually makes sense — it's really just the converse of the smiling-makes-you-happier phenomenon. The general point is that in addition to displaying the emotions that we feel first, our bodies also come to feel the emotions that we display. Smiling on a crummy day can trick you into a better mood, and tearing up when you're ecstatically happy can help bring your emotions down closer to normal.

If you're not a person who cries when you're happy, that's a harder response to teach yourself than smiling when you have a bad day (as many can attest, it is only through multiple strategies and much practice that actors can learn to cry on stage).

But if you do cry when you're happy, never put up with accusations of being "too emotional" ever again. As it turns out, according to science, you're actually the well-adjusted one. Let those tears flow, girl — you'll be feeling back to normal in no time.